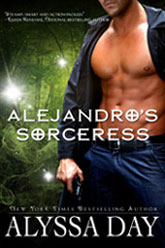 Today we are interviewing Alyssa Day, Paranormal Romance author and New York Times and USA Today Best Selling Author!
Alexis: Hi Alyssa, Thank you for visiting Happily Ever After Thoughts :-) You write many of your books as part of a series. What is it about this approach that appeals to you?
Alyssa: Thanks for inviting me! I love series (both reading and writing them) because once I invest in characters and a world, I want to return to it over and over.
Alexis: Me too :-) Can you tell our readers a little bit about your latest release, ALEJANDRO"S SORCERESS?
Alyssa: Alejandro and Maria were characters in my book ATLANTIS UNLEASHED, and they were such strong characters - especially Alejandro! -- that I wanted to find out more of their story.  My team is formatting and converting the book now and it should be available for all e-readers by the end of this week.
Alexis: Whoohoo!  Can't wait! Where did you get the idea for this story?

Alyssa: I always start with a "what if?" and this one was triggered by an article about the difficulties in some marriages due to the woman being the primary or even only breadwinner these days.  I wondered what if Alejandro, who was the strong alpha male who protected the whole village in ATLANTIS UNLEASHED, goes to special training at the FBI, and while he's there, Maria discovers she is a witch with enormous power.  The power balance between them would undergo a tremendous shift--how would they deal with that? Also, after 6 months apart, would they still love each other quite so fiercely?
Alexis: What a great issue to delve into. What are your favorite character traits of Alejandro and Maria?
Alyssa:  They're both strong, Alejandro especially has a terrific sense of humor, and they're both intensely dedicated to justice and protecting the innocent.
Alexis: Which is your favorite series that you've written?
Alyssa:  Definitely The Warriors of Poseidon!
Alexis: What can we expect next from you? Do you have any new releases coming or a work in progress?
Alyssa: Yes!  High Priest Alaric's book, HEART OF ATLANTIS, will be out in print and in e-book in December from Berkley, but before that I'll be releasing Denal's story and Jack's story (the tiger shape-shifter everyone loves!) as e-book exclusives!
Alexis: That's great. We have a lot to look forward to :-) Thank you so much for sharing your paranormal worlds with us. It's a pleasure having you visit.

Alyssa: Thank you! It's lovely to be here!  I'll give away a copy of VAMPIRE IN ATLANTIS to each of 3 lucky winners!
Alexis: For a chance to win Alyssa’s VAMPIRE IN ATLANTIS be sure to leave a comment for her.  If I have contact information I will let you know when you win, otherwise, check the side column for your name on Wednesday under WINNERS :-)
For more information on Alyssa’s Romances go to http://www.alyssaday.com/books.html
Alexis: Check out this excerpt from ALEJANDRO"S SORCERESS.
Excerpt:
Southern Shores, North Carolina
Maria stood on the veranda of her rented cottage and stared out at the deep-blue waves, dappled with golden sunlight from the sun setting behind her. The sand on the beach shone like a blanket of crystals in the slanting light.   It was hard to believe that a place of such beauty could play home or hiding place to such hideous monsters—and they were only the least of it.  The ones she and her coven sisters were tracking here were merely the gatekeepers trying to bring a far worse evil into the world.
Demons.
She leaned her head back and took a deep breath of the fresh sea air.  The late fall evenings were brisk and brought a welcome change after summer's heat.  Although she'd grown up with enough heat in Guatemala to be more than comfortable in North Carolina.  Of course, now that she'd learned to regulate her internal temperature, she could probably walk barefoot through a furnace or the arctic tundra, for at least an hour or so, before she started to feel any discomfort.
Magic.  She'd always known she'd had it--had something--but she would have been afraid to pursue it in her superstitious village.  There had been some who'd wanted to banish an innocent child simply for seeing visions of the future; a grown woman who was a witch would have been grounds for stoning or burning.
Luckily, those Atlanteans had rescued the child, Eleni, and helped to rescue the village.  Helped Alejandro rescue them all.
She closed her eyes in pain at the thought of him.  Thick, dark hair, always too long and falling into his gorgeous dark brown eyes.  Bronze skin covering a hard-muscled body that she'd dreamed of for years before she'd finally, finally been able to touch it.  He'd thought of her as a child for far too long, but when he realized she was all grown up, the passion between them had been explosive.
The memory of his dark, strong body rising over hers, bringing her to heights of desire and ecstasy she hadn't known existed, made her tremble a little, and she clutched her hands more tightly around the veranda railing.
"We have to go.  Now."  Trina rounded the corner of the cottage and climbed the steps.  "The demons are at it again.  They just attacked a busload of senior citizens at the Heron's Rest Diner."
Maria channeled her anger and horror into power and tamped it down to use later, when she'd really need it.  Trina, long and lean in black leather pants and a red tank top, shook her head and dozens of beautiful long braids chimed with the bells and charms she'd woven into them.  Maria could see the tracks of fresh tears on Trina's ebony skin and knew instantly it must be really, really bad.
Trina never cried.
"Pete called and gave me the quick rundown, but he's in the middle of a magical duel, so he didn't have time to talk much.  Sounded like there are at least a dozen tourists who will never be eating the Blue Plate Special again," Trina said brusquely, as if she didn't care.  She slammed the cottage door open and ran for the back room.
Maria knew better, so she didn't waste breath on arguing.  They geared up and headed out.
--excerpt from ALEJANDRO'S SORCERESS, by Alyssa Day, copyright Alesia Holliday, January, 2012
Alexis: Don't forget. If you would like to win VAMPIRE IN ATLANTIS, you need to leave a comment.  Three copies are up for grabs, so chances are great!
Posted by Alexis Walker at 11:33 AM