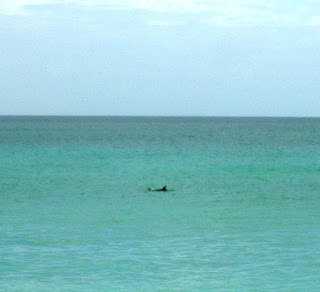 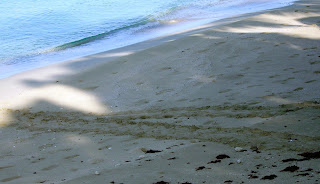 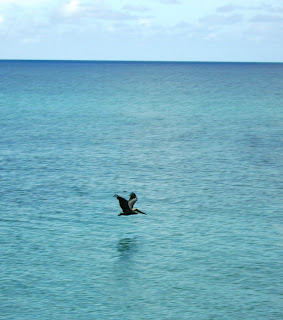 Speaking of birds, the pelicans are daily visitors, gliding a foot above the water, sometimes singularly and sometimes in groups of five or more. On occasion, one will fly high and circle the water in front of the house.  That means he has spotted fish.  I watch, and sure enough, he dives straight down into the water then pops up immediately like a cork.  He tilts his head back, letting water flow out the sides of his mouth, and swallows. He floats for a moment before he flaps his wings while sitting there, shaking the water off his feathers.  He remains drifting on the water for a few minutes, then spreads his wings and takes off into the sky, to circle once again before diving like a shot back into the water.  Usually this occurs with just one pelican, but sometimes two will eat together.
Overall, sitting on our gallery watching the water can afford us multiple sightings of these ocean regulars.  We are even treated to an occasional school of flying fish.  Of course, looking closer to the beach itself, there are the many species of crabs, but their numbers require a post all to themselves.
Lesson #3
On island, we don't stop to smell the roses.  We stop to enjoy the ocean life . . . what wonderful life it is too :-)
yours, Alexis
Posted by Alexis Walker at 7:00 AM 5 comments:

Review: SEDUCTION OF A HIGHLAND LASS by Maya Banks

Banks brings a touch of her well-known erotic flavor to the Highlands where the time period clothes the men in armor of a frighteningly gorgeous stature and the only peek at a women’s beauty is in the eyes or at the top of her corset.
Keeley McDonald is banned from her clan for an act she didn’t commit.  Her family and best friend didn’t stand up for her, causing her to be vanquished to a shabby hut outside the clan’s territory.  To survive, she became a healer receiving payment in food and necessities.
Lucky for Alaric McCabe because he fell at her doorstep in serious need of healing the deep sword wound across his torso, and Keeley never turned away a patient.
Alternating between calling her a devil and an angel in his delirium, he must have settled on the idea of her being something in-between as he gave her no choice but to return to his clan as they were in desperate need of a healer.
As the clan began to need, trust, and revere Keeley’s abilities, Alaric also saw and wanted more than just a savior.  He’d found ways to see and experience all the parts of her body, which mounted in a secret seduction they couldn’t tear themselves away from.
The only problem with that was he was soon to marry a member of another clan for a much needed alliance.  Alaric’s bride would be Keeley’s former best friend.
It’s amazing what a man will do for his true love.  Will Alaric defy the arranged marriage?  What are Keeley’s thoughts of the friend who betrayed her and is to marry the one man she let herself love?  Will Alaric and Keeley dare to admit their love and what will the clan do with this knowledge?
Maya Banks raises a mountain of conflicts and skillfully leaves the solutions to the Highlanders.
Enjoy, Dawn

Posted by Alexis Walker at 8:00 AM No comments: