12 Alarm Cowboys only 99 cents on Pre-Order 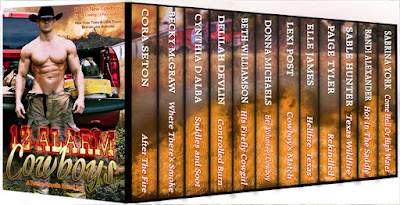 My contribution to this box set which is releasing in early August is Cowboy's Match which is the second in the Poker Flat Series. By the way, Poker Flat is a nudist resort. Just sayin' ;-) 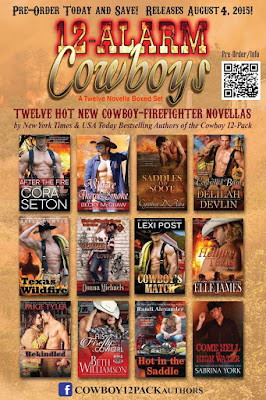 If you'd like to take advantage of this great price and pre-order the box set, here are the links:
Amazon
Barnes& Noble
iBooks
Kobo

And if you'd like a sneak peek of Cowboy's Match or cover reveals or special prizes, be sure to sign up for my Lexi Post Updates.

I hope you are ready for summer because it looks like it's going to be a hot one ;-) Stay cool!

New Romantic Suspense Release: Kiss the Killer (From the CIA 2)!

“Have you killed anyone?”  Swedish chemist Alina Runesson feared his answer.  Men have died for her.


“Not today.”  CIA Agent Vic Grant responded callously.  Women were not part of his agenda.


It’s hard to admit they have a connection called love and have to trust it’s not fatal.

That's what you'll find in the second of my series, From the CIA!  The ebook's release was yesterday, May 26, three weeks earlier than planned as, amazingly enough, the editing was right on.
The following discussion gives you a taste of the world my agents live in and the people they run into (or kill!) in Kiss the Killer (From the CIA 2).  The paperback is scheduled for July.  Read on to learn more about the spine tingling adventure of Alina Runesson and Vic Grant...

Chemist Alina Runesson lives in Sweden under the government’s witness protection program.  Her look-alike cousin is imprisoned in Baghdad and fiancé killed saving Alina from the same fate.  She cannot love a man because he will die for her, but she needs help to rescue her cousin.


CIA Agent Vic Grant escapes to Sweden to correct the illegal orders of his boss.  Vic plans to recover his agents left by the US to be buried with their assignments.  Sometimes the bad guy has to be killed along the way.  His life is not made for relationships.


Vic and Alina meet by chance and align their missions.


Tension, frustration, and sparks of passion guide Vic and Alina as they execute their personal goals.  Their itinerary is repeatedly changed according to assaults by double agents and terrorist.


He kills, she kills, and bodies are left on the side.


They have a connection called love and have to trust it’s not fatal.

Please read my book, please love my book, and let me know! 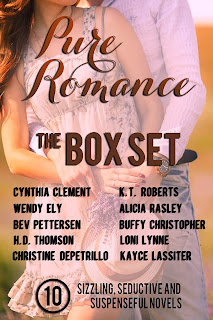 aHunter4Rescue - Cynthia Clement
A unit of elite alien warriors, known as Hunters, crash lands on earth. Fiona witnesses the collision and helps the wounded. Their leader, Ardal, is torn between getting his men to safety and protecting Fiona, the woman he has bonded with.

Dreaming of Him - Wendy Ely
Loneliness has clouded Amber Addaire's life for a while. It's only when she starts dreaming of a familiar man that she begins to feel better. Trace is a spirit stuck on earth long enough to let his childhood friend know how much she meant to him before he died. He can only communicate with her through her dreams and hopes she will realize who he is soon.

Studs and Stilettos - Bev Pettersen
An aspiring actress struggles to prove her worth on a Kentucky movie set shadowed by the mysterious disappearance of a groom twenty years ago. However, her hopes for redemption are threatened by a sexy horse trainer…and a stone-cold killer.

Protecting Katie – H. D. Thomson
Morgan Stone will do anything to keep his daughter, Katie. But would he steal? Lie? Cheat? Most definitely. Caught in the middle of a battle between two men, Kristin doesn’t know whom to trust. She finds herself falling for Morgan, her fiancé’s enemy. But when it comes to loving Kristen, will Morgan be willing to give up everything, even Katie?

More Than Cookies - Christine DePetrillo
Caterer Sage Stannard is sick of watching everyone else get served a happily ever after. When will it be her turn? Chainsaw artist Orion Finley is itching to carve a new life for himself with his daughter. How can he get custody back from his ruthless ex-wife? When Sage and Orion meet over a bloody couch, will they need more than cookies to sweeten each other and make their dreams come true?

Poetic Justice - Alicia Rasley
A renegade rare-books dealer and an heiress embark on a sham betrothal for a lofty literary aim–to prove Shakespeare really was Shakespeare. It would be the greatest acquisition of his checkered career–a play in Shakespeare's own hand. But between John and his prize is an obsessed villain. The heiress can lead him to his goal, but only if he'll risk his life, his freedom, and his loner's heart.

The Mating Moon - Buffy Christopher
Ivy knows that as a female Were-tiger, finding a mate is supposed to be her top priority. But when you can't control your animal side why does that matter? Add being traumatized by a recent violent attack from her past she feels like she can't win! How can she control her tiger during the full moon when she’s more concerned about being killed?

Immortal Heat - Loni Lynne
Book One in The Guardians of Dacia Series. Some legends are better left to folklore. Marilyn Reddlin refuses to take heed of a stranger’s warnings to leave Romania. Draylon Conier must save her from herself and the legend before they both succumb to Immortal Heat.

Loons of a Feather - Kayce Lassiter
Book One in The Delta Jane Series. One woman, two men, an inept fairy godfather in pink cowboy boots, a redneck fairy godmother on a Harley with lips tattooed on her ass, and a love-match in the making. What the hell can go wrong with that?