This is how the start of a conversation usually goes between me and my husband if I’m reading a romance novel. For some reason when I delve into a great romance, I don’t hear anything. Many people may not find this surprising, but for me, anything that requires concentration requires silence, pure, uninterrupted silence. Whether I’m writing, preparing class, or going over my budget, I need complete quiet, no music, no lawn mowers, no people talking in the background.

But when reading a romance novel, all bets are off. I can read in the airport, the doctor’s office, standing in line waiting to buy tickets to the ballet. I can even read in front of the television. I start off by reading during commercials and before I know it, I’ve missed the last half of the movie!

Does anyone else experience this complete shut out of the real world while reading a romance? Or is my experience just a little out of the norm? Please, do chime in on this. I’d love to hear if you find romance novels as riveting as I do.

A Place to Read 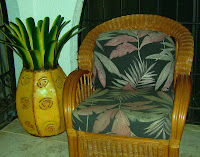 Having just moved, I find myself in a quandary as to where will be the most comfortable place to read. Of course, not everything is unpacked nor all the furniture in its place; however, that doesn’t preclude me from wishing to get comfortable with the next book from my “to be read” shelf.

I could always go outside and lay in the sun, but I have found over the years this is not a good idea. In addition to the obvious risks, I discovered I’m one of those people who can sit still for long periods of time. Yes, I’m a portrait artist’s dream. The only problem with this ability to remain motionless is it usually results in a very serious sunburn. It is one thing to get a burn while being active. It is a completely different experience to do so while remaining perfectly still!

So, where will my comfort area for curling up with a good book be? I don’t know, but I’m open for suggestions. Where is your favorite place to read? Do you have a comfy chair or is a lounge chair by the pool more your style? Let me know :-)

I just finished reading a Lisa Kleypas novel titled LOVE IN THE AFTERNOON. I was struck by how much the animals in the story added to the characters, the plot, and the suspense. Being an animal lover myself, I related to the heroine and her empathy for animals. However, her knowledge about them far eclipsed mine.

In this romance, the heroine, Beatrix, feels more at home roaming the forest and helping hurt animals than dressed in her gowns and conversing in drawing rooms. But it was more than the heroine’s character that was proven by the animals in the story. In fact, the hero, Christopher, inherited a terrier mutt during a battle and was at a loss on how to control the animal. But the dog, Albert, eventually becomes a war hero himself, letting the reader see a reflection of the hero in the mangy but honorable canine. The many animals including a mule named Hector, Albert, Lucky the three-legged cat, a wild horse, a hedgehog and a goat, all have special roles to play that move the plot along and unbelievably help the hero and heroine fall in love.

I started thinking back to other romances I had read that had animals. Perhaps because I am an animal lover, I found them to be additionally satisfying. Another I recall is entitled MY UNFAIR LADY by Kathryne Kennedy. In that romance, the heroine, Summer, is also a savior to animals, but having grown-up in early America, Summer’s personality is quite different from Beatrix’s. Summer’s constant companion is a Chihuahua named Chi-Chi. Chi-Chi manages to turn the tables on the hero at the first meeting, but also manages to help move the plot along while continuing to reveal Summer’s character.

I know I’ve read others through the years and I’m sure there are many I haven’t read. Do you have a romance you particularly like that includes animals that are important to the story? If you do, I’d love to know what they are. I’m in the mood for more romances with companionable animals of the heart :-) 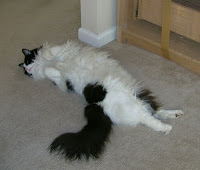 This cat knows how to relax. For him it means nothing more than an afternoon nap on his back, but for some of us two legged creatures, relaxing can be difficult, especially when under the stress of deadlines, jobs, family responsibilities, etc. Unfortunately, I’m not one who can meditate or enjoy a good massage; however, I can enjoy a good romance novel.

What I do to relax is take a day to read. I sit down with a great romance novel and read all day. I do nothing but read. Forget about the laundry, Monday’s lesson plan, or the bills that need to be reviewed and just relax with a good story. When I allow myself this indulgence (not often), I usually have the book finished by dinner. I always take a day to read whenever I have to work an event on the weekend or help a friend move. I take the only day of my true weekend and read. It’s as if I’ve been away from work a week. I feel completely refreshed by Monday. Of course, I’ve traveled back in time, gone to Scotland, and fell in love, so of course I feel as if I’ve been away from work for a long time.

We don’t often treat ourselves to a guilty pleasure, but it seems there are a lot more expensive and time consuming addictions than reading romance novels. Are there tasks you push aside when you want to read? I’d love to know I’m not alone in shirking my daily chores once in awhile for a good read. Do you ever take day and tell your loved ones not to bother you so you can read? Do tell.

Alexis
Posted by Alexis Walker at 10:38 AM No comments: