Firstly let me say a big thank you to Happily Ever After Thoughts for hosting me today. It’s such a thrill to be here!

My name is Grace Elliot and I lead a double life; as a veterinarian by day and author of historical romance by night. Like many authors I came to writing through my love of books, and I write what I love to read – historical romance.

Don’t get me wrong, I love being a veterinarian but it’s not all fluffy kittens and some days are hard, real hard, such as saying goodbye to a much loved pet – so what I need in a good read is escapism, and historical romance has that by the carriage load!

Curling up with a Regency romance, I find myself suspending disbelief. How much easier to believe my regency alter ego can waltz provocatively, or calm a bolting hunter, than my bumbling 21st century self.

Heck, I don’t want to read about the real world I’m trying to forget, take me back to when men rode stallions but couldn’t handle emotion.

Lord Ranulf denies his attraction. (From A Dead Man’s Debt.)

Every fiber of his body screamed to reach out and hold her hand, and yet he resisted. Never had he encountered a woman as dangerous as Celeste; her hair in a tousled plait and eyes all the colors of the sea. And yet it wasn’t her physical beauty but her honesty and trust that was bewitching. For the first time he could almost believe that he’d found a kindred spirit. His fingers tightened on the tumbler. He was staring and yet he couldn’t help himself. An inner voice warned him off. She deserved better than him.

And then there’s something about the Regency. Perhaps it those gowns, wonderfully impractical and yet so alluring with their tiny bodices and puff sleeves. And let’s not forget chaperones! How resourceful did the regency heroine need to be to snare her dark lord under the eye of a chaperone? And then of course there’s the bone tingling romance – how something long denied is so exciting….

Ranulf finds Celeste in his arms. (From A Dead Man’s Debt.)

But then she tipped her head back and he glimpsed the curiosity in her eyes. Acting purely out of animal instinct he tilted her chin to gaze deeper into those mossy eyes. Gladly she arched toward him, pressing the length of her body against his rising need. He brushed his thumb over her lips. With a soft groan she strained upwards, inviting the touch of his mouth against hers. He drew back, trying to distance himself from the responsive femininity pressed against his chest. That he desired Miss Armitage he did not doubt, and yet he held back and the reason puzzled him; more than propriety, more shocking than that… he liked her.

Ok, so if I’m totally honest, I’d hate to live in the Regency – I’m far too fond of hot and cold running water…but that’s where historicals come in: I can dream …and I hope you will to! 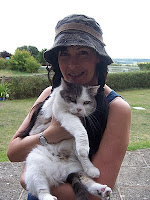 A Dead Man’s Debt by Grace Elliot.
- A story of sacrifice, pain and redeeming love, against a backdrop of blackmail and family duty.
‘Celeste Armitage has a plan…and that plan doesn’t include marriage.

After deliberately humiliating a suitor, Celeste’s despairing parents exile her to the country. But once there she discovers a sketch book of daring nude studies and is shaken to find the artist is her hostess’s eldest son, Lord Ranulf Charing. This darkly cynical lord is exactly the sort of dissipated rogue she despises most…if only her blood didn’t heat at the thought of him…

Nothing is as it seems. Lord Ranulf’s life is a façade. Only he can save the Charing’s from disgrace as a blackmailer tries to ruin his late brother’s reputation. But just as Ranulf dares to open his heart to Celeste, the fury of his nemesis is unleashed… facing him with the stark choice between true love and family duty. However when Celeste guesses the truth behind his rejection, Ranulf underestimates her resolve to clear his name and in so doing places the woman he loves in mortal danger….’

A Dead Man’s Debt is available from most eBook retailers, Amazon Kindle bookstore and http://www.solsticepublishing.com/products/a-dead-man%27s-debt.html

If you would like to know more about Grace Elliot and her work visit:
http://www.graceelliot.webs.com/

I love this book already and I haven’t even read it yet! Thank you, Grace, for sharing a little of yourself and your book with our readers. I hope you will come back and visit us again.

Alexis
Posted by Alexis Walker at 4:00 AM