Blame it on Fate - Pre-order Only 99¢ for 6 Romances for a Limited Time! 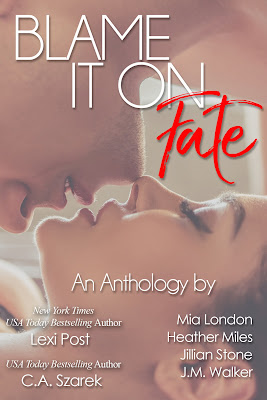 BLAME IT ON FATE

How great is the price of Fate?

Six stories about love, passion, and the role Fate plays in the lives of lovers. Six couples must decide whether to accept Fate or fight against it.

Temptations of Christmas Future (A Christmas Carol Book 3) by Lexi Post: When Joy, the Spirit of Christmas Future, is paired with a problem Spirit Guide, her positive outlook is tested beyond its limits. Will she persevere, or will Malcolm, the young widow they’re helping and her own outlook be the casualties of her weakness?

Highland Oath (Highland Treasure Book 1) by C.A. Szarek: Saving a life in the 17th century is hard enough for a time-traveling doctor, until Fate hands her heart to a Highlander.

Claiming Emerson by Heather Miles: My double life was a shell game I’d mastered long ago, a chosen fate. The art of illusion wasn’t just something I’d become proficient at, I lived it.

A Twist On Fate by Jillian Stone: “They say that you don’t meet people by accident, that you cross paths with strangers for a reason. But then memes about fate are for morons, right? Thing is—after what just happened—I’m not so sure anymore.”  —Skylar Fenstermaker

Undeniable Fate (Undeniable Series Book 1) by Mia London: Shocking is putting it mildly. When the stranger she’d met only twelve hours earlier suddenly walks into her hotel room, Lily can think of only one thing.