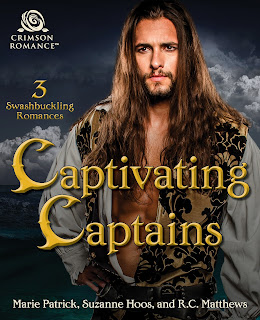 Hello, gentle readers!
Doing a bit of shameless promotion here. My publisher, Crimson Romance (I love them!) is releasing a box set called Captivating Captains and my story, A Treasure Worth Keeping is included (whooo-hoooo!).
Here’s your chance to meet Captain Trey, my hero. I pictured Hugh Jackman the entire time I wrote it. Do you remember the movie with him and Nicole Kidman? Most of the movie, Mr. Jackman is scruffy (unshaved, umkempt…you get the picture…love him like this!), but there is a scene where he cleans himself up—freshly shaved, hair slicked back, dressed in a white sport coat—that always makes me gasp no matter how many times I’ve seen it (hang on while I clean up my keyboard….I just drooled on it). Anyway, that’s how I picture Captain Trey.
Here’s what A Treasure Worth Keeping is about:
Caralyn McCreigh has always believed in three things: that her father, Daniel, would never force her into marriage; that she could have a storybook romance with a man who sweeps her off her feet and a loving marriage like the one her parents share; and that Queen Isabella’s legendary lost treasure, Izzy’s Fortune, exists. When her father tells her that her marriage has been arranged, all her beliefs are shattered, and she does exactly as he hopes she will - embarks on a quest to find Izzy’s Fortune. She believes that if she finds the treasure, she’ll be able to buy herself out of a marriage to a man she doesn’t know or love. And who better to help her than Captain Trey, the infamous treasure hunter?
Tristan Youngblood, captain of the Adventurer and future Earl of Winterbourne, would much rather sail the oceans and search for lost treasure than settle down and take over the reins of the Winterbourne estates. However, when he receives news that his future has been decided for him, he knows he has no choice. He has no qualms against marriage itself, except for what he witnessed in the misery of his parents' union. He does not desire the same for himself, but instead of rushing home to to court his future wife, Tristan accepts Caralyn’s proposal and embarks on one last grand adventure to search for Izzy’s Fortune.
Remember: Spread kindness wherever you go!