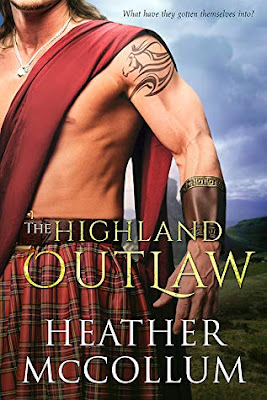 The Highland Outlaw
by
Heather McCollum

5 Stars
“Not much in this life is fair, lass.  What ye have seen and lived through has surely taught ye that.  We just make the best decisions we can in the moment and hope that fate falls in our favor…The marks mean that we survived something fierce and lived to carry the scars.  They show how strong we are.  ‘Tis not something to mourn but a testament to our endurance.”

Shaw Sinclair, Clan Chieftain of the Sinclair’s, is doing whatever it takes to see his clan restored to their lands.  Swearing an oath to see a wee babe transported to safety, Shaw discovers his mission may not be so easy to accomplish.  Desperate to fulfill his duties to his people, Shaw kidnaps Alana Campbell and makes a bargain with her—if she helps care for the babe until the journey is complete, he will help her rescue her mother in return.  But what he doesn’t bargain for is how his feelings for the lass change from ally to something much more…

Alana Campbell is no stranger to being trussed up and abused, but after being tossed into a deadly fire, she has vowed that no one will ever cause her harm without a fight.  From her teachings at the Highland Rose School, Alana is well versed in defending herself, and Chief Sinclair finds himself at the wrong end of her sgain dubh!  While putting up a fierce fight, Alana doesn’t gain her freedom but she does earn the respect of The Sinclair.  Offering her a tit for tat bargain, Alana and Shaw find themselves playing husband and wife to protect the life of an innocent babe…and Alana discovers that under all that rough exterior is a man she could grow to love.

The Highland Outlaw is the 4th installment to The Campbell series, but may be read stand alone.  Now let’s get to the smexxy highlander, Shaw.  He’s officially been added to my book boyfriend list!  I absolutely devoured Heather McCollum’s newest and I don’t think I could describe Shaw any better… “He tasted of whisky and sin, and she couldn’t get enough…”  Highly recommend this as well as the other books in the series! 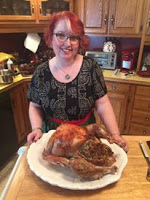 Sharing what I love,
Veronica
Posted by Lexi Post at 6:11 PM