The Winter Sea by Susanna Kearsley

Author Carrie McClelland finds a humble cottage to rent in Scotland where she plans to write an historical fiction novel of the nearby Slains Castle.

The owner of the cottage has two sons, one kind and helpful, the other both kind and helpful and a university history professor.  Not to mention, the second, Graham, the mutual attraction building through walks around the castle and horse rides. 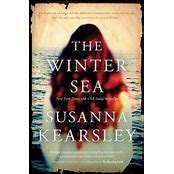 In the 1700's, Carrie's focus for her novel, the French and Scottish attempted to reclaim the exiled James Stewart crown.  She created in her mind the setting of the castle and the people involved.  Yet, it became apparent that her memory matched the history and she may be dealing with ancestral memory.

As Graham shows up at her cottage frequently, her connection to her character begins to cause problems in the current day.  She knows what really happened between the invasion and mysteries surrounding Slains Castle and the relation to her character and Graham's family.

The atmosphere of The Winter Sea is richly produced giving the reader a feeling of being in the present and the past along with Carrie.  The intensity between Carrie and Graham is spine tingling while you read to find out if the past will remain a problem with the present.