Anything But a Gentleman by Elisa Braden

The rules of London in the early eighteen hundreds don't favor women.

Augusta Windmore is determined to change that around for her sister, Phoebe.  Phoebe was promised a betrothal before the pregnancy, and the future groom has fled the situation. 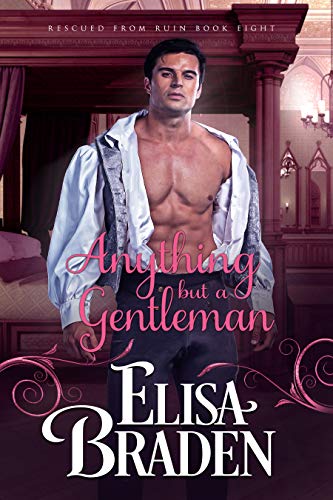 Doing anything for her younger sister, Augusta has one choice.  She needs to convince Sebastian Reaver, owner of the Men's Club, to help her.

In disguise as a maid, she gains access to Sebastian's private quarters.  And she won't budge regardless of his brutish candor.

Sebastian likes things simple and utilitarian.  The constant badgering by the spinster, Augusta, has thrown him for a loop and he's not quite sure what to do with her.

He makes an unconventional deal with her, sure she'll run, but an agreement confounds him.  Especially since they will be in close quarters for an extended time.  Time for them to realize or deny why they look forward to seeing each other.  Time to get a husband for Phoebe.  Will there be time for Sebastian and Augusta to lower their shields of pride and realize they aren't that different?

Read to find out if a double romance can survive an unconventional start!