The Sorbonne Affair by Mark Pryor

Mystery and love float among the Parisian cafe's while American author, Helen Hancock, has a secret admirer. More likely, not an admirer but someone who thinks it's necessary to hide cameras in her hotel room.

Helen is in the city to direct a small writing seminar and to work on her current romance novel.  After she finds the hidden cameras in her room at the Sorbonne Hotel, she reports them to the US Embassy. 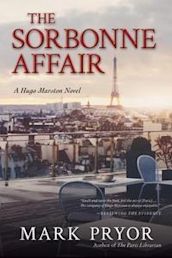 o investigate.  One video is highly embarrassing for Helen.  A triste with a student needs explanation, whether it's love or something else.

Soon, a simple camera investigation turns to murder.  Hugo teams up with a Parisian Lieutenant, Camille Lerens along with breaks to see his girlfriend, Claudia, a journalist.  More help comes in the form of a former colleague claiming the whole affair has something to do with a recently released felon.

Such a tragedy to solve a mystery of spying and murder on the lovely streets of Paris while contenders are eager to keep romance in the air.