Naomi and Penny, two women looking to start a new life with or without men. Preferably without.

Penny moved to Magnolia, RI and bought a newspaper with excitement to be her own editor.  She also wanted to reconnect with her daughter who owned a local hotel.

Naomi was forced to Magnolia after a car accident.  Her brother, Jackson, brought her to Magnolia to help her through the injury and another surprise her body revealed.

Penny's basement apartment flooded, urging her to rent a room from grumpy Spencer.  Spencer was a local that revealed very little about himself to the community.  She was determined to find out what he was about for a "get to know your neighbor" spread in her newly acclaimed newspaper. 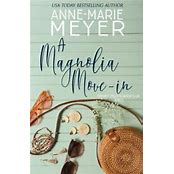 Naomi wondered where her unofficial fiancé was during her accident.  Jackson hated him and didn't want her fiancé around. Jackson's best friend seemed to have his eye on Naomi, which she thought about reciprocating until the fiancé contacted her.

Penny found an accidental loophole to get to know Spencer, and I can say that I like the direction they're going in.

Whereas, Naomi needs to stand up for herself and make a wise decision.  Not sure what she's going to do.

You may wonder what the Red Stiletto Book Club has to do with this.  The book club is a group of women who do read books and may chat about it, but their main goal is to help one another and to make everyone feel needed and loved.  What a great theory!  It's a cheery and warm story.