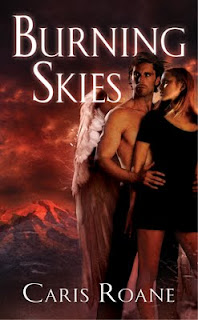 Alexis: Happy May Day everyone!  Our guest author today is Paranormal Romance writer Caris Roane and she's giving away two signed books, so be sure to leave a comment.

Hi Caris. Welcome to Happily Ever After Thoughts.  Thank you so much for coming.  You had a long career writing Regency Romances before you moved into the Paranormal realm. Can you tell us what, if anything, you have brought from your Regency days to your Paranormal work?


Caris:  I would have to say that I brought a love of world-building into my paranormal work.  When you write either a Regency or a Paranormal, it’s all about the world.
So, let me give you an example of my favorite part of any ‘world’ and how world-building helps with that:  SUPER HUNKY GORGEOUS MEN!  There…I’ve said it!

So you take a Regency buck and put him in a shoulder-fitting coat made of blue superfine (and naturally he has broad muscular shoulders) then you add a pair of snug buckskins and of course he’s lean, muscular, and fit from riding horses his entire life!  So…we’re talking Regency yummy, a hero fit for his Regency world!

Now, in a paranormal, you take a hunky vampire warrior and deck him out in a black leather kilt, black leather wrist guards spiked with silver studs, and a weapons harness.  Put a thirty-inch sword in his hand and let the battle fly.  He’s now fit for his paranormal world!

Voila—totally different genres but the same essential details necessary to building the world—or would that be man-building… *knees turning to water here*!


Alexis:  Oh, I much prefer man-building!
You have a new romance being released this month, Burning Skies. How does this book fit into the Guardians of Ascension Series?
Caris:  Burning Skies is book #2 in my Guardians of Ascension series.  The story develops the relationship between Warrior Marcus and his woman, Havily.  Both characters, and their intense attraction to each other, began in the first book, Ascension.  However, if you pick up Burning Skies first, don’t worry…this is a stand-alone read!

The overall idea behind the series—other than the super-hot romance of each novel—is that Second Earth, or the second dimension, has reached a point of crisis in which all may be lost if the ruler of the world, Endelle, and her elite band of warriors, fail to hold the villain at bay.

As for the storyline of Burning Skies, Havily experiences a sudden emergence of unusual preternatural power and because of this, the enemy decides she must be destroyed.  After she’s seriously attacked by a death vampire and could have been killed, our gorgeous vampire hero, Marcus, must make one of the toughest decisions of his life; should he leave behind the life he’s built for himself as an exile on Mortal Earth, or should he return to Second Earth to serve as Havily’s Guardian of Ascension?    In the process of battling the enemy, Marcus and Havily fall deeply in love and very deeply *ahem* into bed!

Alexis: I read the first book, Ascension.  Actually, I put my review of that book in my last post. I really can’t wait to see Marcus and Havily's story. Since she wasn’t too happy about him having abandoned Second Earth, I’m sure the sparks are going to fly. Where did you get the idea for this series?

Caris:   When I first read Sherrilyn Kenyon a few years ago, I was completely enchanted with her Dark Hunter series so I started toying with the idea of creating my own vampire warrior series.  Of course, I didn’t want to go the mythology route as Sherrilyn did, although I was seriously tempted, but I did want to create a world as big as the one Sherrilyn had constructed.  I thought if I could develop the concept of ascending dimensions, to which people were called through longings and through dreams, then we could possibly move through all six dimensions in the course of a very long series.  Will I actually get to do that?  I have noooo idea, although I’d love to.  I see this first part of the series on Second Earth going the length of ten books in order to create a final vanquishing of our super-villain—and yes, I already have these books planned out.  But after that, if the readers want more, I really want to go to Third Earth, with a whole new set of hunky warriors, new powers, and an even larger world-based conflict than the one on Second Earth.  And it would be soooo much fun!

Alexis: That sounds absolutely awesome, Caris!  I love a series that keeps going. I think it gives a reader a chance to get comfortable with a whole cast of characters. What are your favorite character traits, physical traits, powers, of Havily and Marcus?

Caris:  From early on, I had this image burned into my mind about Marcus, that he had this slash of eyebrows over light brown eyes.  He’s a very intense man, something he ought to be having lived on Second Earth 4,000 years and having created a financial empire on Mortal Earth.  As for Havily, she has a wonderful and very positive fashion sense.  She prefers Ralph Lauren and always has her make-up done perfectly.  These traits made her exactly right for Marcus, who basically has lived in the public eye for centuries, and as the story progresses this becomes even more significant.  But beyond all that, what ends up driving the story is her ability to do darkening work, to move through nether-space, and to do a split-self!  And by the way, all of those powers really begin to make sense as Burning Skies cooks along!

Alexis: Hmm, then what kind of research did you have to do for this novel?

Caris:  Fashion research for one because of Havily’s preferences, but that was a lot of fun.  I first got the idea by glancing through Vanity Fair.  I remember opening the cover and seeing an outfit and knowing that I was looking at something Havily would wear.  That was awesome.  It was a fairly simple leap after that, to put Marcus in Tom Ford.  BTW, some of the Tom Ford products have the sexiest ads ever, just sayin’.

Alexis: I’m not too in tune with the latest fashions, but I think I may just have to check out those ads J This series is so exciting! When can we expect the next book and do you have any other romance novels in the works that we can look forward to?

Caris:  Burning Skies was just released on April 26th!  Isn’t that fantastic!  With this series, St. Martin’s and I were committed from the beginning to bring three books a year to the marketplace.  My reason for three books was simple:  if the fans loved the series, I didn’t want them to have to wait that long for the next installment!!!  So far, it’s working out really well.  As a matter of fact, I just finished the fourth book, Born of Ashes, which will hit the shelves early next year.  The third book, Wings of Fire, is a September release.  I will also have a novella out sometime in May, based on the series, called, Brink of Eternity.

Alexis: We all know that writing is lonely, hard, committed work. What would say is your favorite part of being a Romance Novelist?

Caris:  I’m very fortunate, because in so many respects I’m extremely well-suited to being a novelist.  For one thing, I love being alone.  I gain a tremendous amount of nourishment from my alone time so in that respect writing has never been a hardship.  But my absolute favorite part about being a romance novelist is that I get to write the books I love the most, the ones, like your blog’s name, with the Happily Ever After.  Come on, what’s better than that?!?

Alexis: Good point J Thank you so much Caris, for visiting Happily Ever After Thoughts. We like talking about romance novels here and learning about the wonderful authors who write them.

Caris:  And thank you for having me!  I’ve really enjoyed sharing my thoughts with you and your readers today!


Something I always like to know from those readers who love paranormals is what power they’d like to have above all others…or even powers as in plural!  I’d love the power to heal, that would be awesome.  But I’d also love to be able to dematerialize from place to place.  Talk about saving on traveling costs!   So readers, what power would really turn you on!?!
Alexis: Be sure to comment for a chance to win a signed copy of one of Caris' books. She's giving away Ascension and Burning Skies.  Winner will be picked Wednesday morning.

If you want to learn more about Caris Roane and her fascinating series, go to http://www.carisroane.com
Posted by Alexis Walker at 7:00 AM