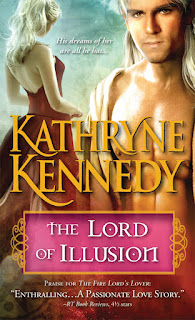 Today we are interviewing Kathryne Kennedy, Fantasy Romance author.
Alexis: Hi Kathryne, thank you for visiting Happily Ever After Thoughts :-)
I loved your RELICS OF MERLIN series with shape shifting heroes, precious jewels, and a magical hierarchy.  For those who have read that series, how would you say THE ELVEN LORDS series is different?
Kathryne: The RELICS OF MERLIN series (Enchanting the Lady, Double Enchantment, Enchanting the Beast, and coming soon: Everlasting Enchantment) takes place in a magical England altered by the magic in the blood of Merlin’s descendants. The characters are primarily shape-shifters—creatures created by one of Merlin’s experiments gone awry and immune to magic—and the world is a bit more lighthearted, more whimsical.
In THE ELVEN LORDS series, seven mad elven lords broke the barrier between worlds and conquered England, enslaving the people in their war games as if they were playing chess on a bloody scale. They passed their beauty and magic down to their half-human children, and these half-breeds became the only hope of freeing England. This series is a bit darker, with heroes and heroines challenged to overcome great obstacles.
Those are the primary differences, but between the RELICS OF MERLIN series and THE ELVEN LORDS series there are a thousand differences within the magical rules of the world, and the way in which each world was created.
Alexis: You create such wonderful worlds! Your latest release is the third in the Elven Lords series. Can you tell our readers a little bit about The Lord of Illusion?
Kathryne: It’s about a half-breed scholar, Drystan Hawkes, who must become a warrior to rescue a girl who may be England’s final hope for freedom. It’s about Camille Ashton, a girl enslaved in Dreamhame palace, a place of glamour and illusion, where nothing is at it seems. And it’s about the final confrontation between good and evil, and the great love and sacrifice of Drystan and Camille. 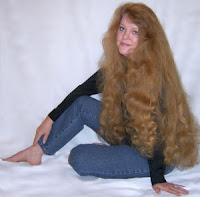 Alexis: I can't wait to read this one! Where did you get the idea for this story?
Kathryne: The world was inspired by Legolas in The Lord of the Rings. I fell in love with his character in the movie, and knew I wanted to create a world with these beautiful, deadly beings. This particular story in the series developed through the overall plot of the book, and the characters shaped themselves within the context of that story.
Alexis: There was something so attractive, honorable and yet heartless about the Tolkein elves, wasn't there. What would you say are your favorite character traits of Camille and Drystan?
Kathryne: Wonderful question. I admire Camille’s courage. She fails again and again, but still rises to her feet to fight some more. And Drystan…he’s such a fascinating combination of gentleness and stubborn fury.
Alexis: Drystan sounds intriguing to me.
Personally, I know what a sweetheart you are. It is hard to imagine you creating such villainous characters. What do you use for that evil inspiration?
Kathryne: Very kind of you to say, Alexis. It’s different for every character, but I use an altered point-of-view to create my villains. For the seven elven lords, they are considered mad by their own people (I often view immorality as a sort of madness) and they think of human beings as nothing more than animals. In their minds, there is nothing really wrong with what they’re doing. They are supreme beings, and would crush a human with as much thought as we would give to stomping on a bug.
Alexis: Hmm, I see, so you project what the thoughts would be of someone with those particular beliefs.Makes sense.
What can we expect next from you? Do you have any new releases coming or perhaps a new series?
Kathryne: I’m returning to the RELICS OF MERLIN series with Everlasting Enchantment, and although I have a book in THE ELVEN LORDS series rolling around in my head, I’m starting to get that excitement that comes with creating a new world. I have this idea about four sisters who have been cursed with fractured magic, and another world populated with demons on a collision course with our own…

Alexis: I'm very excited about Everlasting Enchantment and your four sisters idea has got me thinking that we will be in for another magical ride! Thank you so much for sharing your magical romances with us. It's great fun having you visit!
Kathryne: It’s been a pleasure, Alexis! I have truly enjoyed answering your questions.
Alexis: For a chance to win The Lord of Illusion, be sure to leave a comment for Kathryne.  If I have contact information, I will let you know when you win, otherwise, check the side column for your name on Wednesday under WINNERS :-) (US and Canada shipping addresses only.)
For more information on Kathryne’s Romances go http://www.kathrynekennedy.com/
Check out this excerpt from The Lord of Illusion.
Excerpt:
With a speed that rivaled even his own, she drew his pistol from his belt and aimed the barrel at him. “Get back.”
Drystan obliged, although more from surprise than anything else. “Damn, woman. I just saved your life.”
The naturally sweet tone of her voice contrasted sharply with her surly growl. “Unfortunately, they would not have killed me. And I’ll be damned if I shall let you touch me any more than I would allow them to.”
“Touch you? Have you looked in a mirror lately? Have you smelled—do not flatter yourself, lady.”
“I am not a lady. I am a slave.” She spit out the last word. “And now that you have proven yourself a gallant, kindly allow me to leave.”
Damn, she was starting to annoy him. “And go where? Back to your quarters to shoot another soldier or two? I think not. Give me the gun.”
Her lips firmed and she planted her feet, hands steady on the pistol.
Drystan had reached his limit. He should have listened to Giles when he warned him about reading poetry. About gilding his visions of England. Nothing had been what he expected. Magic produced too many horrors and not enough beauty. Battle consisted of little more than hacking your opponent before he had a chance to hack you. And Drystan’s own magic had proven too weak for him to master.
Now he had rescued his beloved, and she not only refused to thank him and fall into his arms with gratitude, but stood there pointing his own gun at him with every intention of killing him on the spot.
THE LORD OF ILLUSION BY KATHRYNE KENNEDY—IN STORES FEBRUARY 2012
He'll do anything to save her...
Rebel Lord Drystan Hawkes dreams of fighting for England's freedom. He gets his chance when he finds a clue to opening the magic portal to Elfhame, and he must race to find the slave girl who holds the key to the mystery. But even as Drystan rescues Camille Ashton from Dreamhame Palace, it becomes unclear exactly who is saving whom.

For the fate of humankind lies with Camille...
Enslaved for years in a realm where illusion and glamour reign, Camille has learned to trust nothing and no one. But she's truly spellbound when she meets Drystan--a man different from any she's ever known, and the force of their passion may yet be strong enough to banish the Elven Lords from this world forever.
“The world sings with vivid imagery and fantastic magic, and all the previous characters join forces in a thrilling final fight for humankind.”~Publishers Weekly STARRED review
“The hero and heroine are also out of the ordinary, and while this novel remains true to romance-genre mores, Kennedy infuses it with unexpected plot twists that will keep fantasy readers enthralled, too.”~Booklist STARRED review
“Superb writing and a fast-moving plot combined with magical passion make this a real page-turner!”~RT BOOKReviews Top Rating and TOP PICK
Amazon
Barnes and Noble
Sourcebooks
BooksAMillion
Chapters/Indigo
Kathryne’s Bookseller Directory
ABOUT THE AUTHOR
Kathryne Kennedy is a critically acclaimed, best-selling, award-winning author of magical romances. She welcomes readers to visit her website where she has ongoing contests at www.kathrynekennedy.com. She’s lived in Guam, Okinawa, and several states in the U.S., and currently lives with her wonderful family in Arizona, where she is working on the next book in her Relics of Merlin series, Everlasting Enchantment.
Alexis: Don't forget to leave a comment for a chance to win The Lord of Illusion.
Posted by Alexis Walker at 8:00 AM