Today we are interviewing Paranormal Romance Writer Deena Remiel. She is giving away a signed, limited edition, THE BOOK WAITRESS apron.

Alexis: Hi Deena, thank you for visiting Happily Ever After Thoughts. Can you start by telling us the first romance you ever read?

Deena: Wow, the FIRST romance? I think it was a Victoria Holt book, actually. I’d gotten a 3 book set and just ate them up!

Alexis: Oh yes, who can forget Victoria. We've come a long way haven't we, especially in the paranormal realm. Can you tell us about your latest release, THE BOOK WAITRESS?

Deena: Satan is determined to seize control of this human realm. And he’s determined to claim Camille Dutton as his own. But she won’t give up without a fight. Although the portal to Hell has been opened, she and Derek Galloway, an investigative reporter, are searching for how to close it and what they can do to rid the world of the creatures that have already passed through. While their budding relationship grows, Satan gets closer and closer to acquiring his bounty, Camille.

Alexis: Yikes, this is serious stuff! Where did you get the idea for this story? 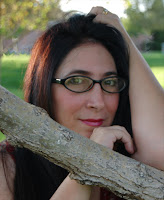 Deena: I used to love watching Buffy, Angel, and Charmed on TV. I adore the constant battle between good and evil. I’d already begun my foray into that realm with my Brethren series and wanted to have a series where average human beings are called to action. Then I recalled people’s stories of near death experiences and asked myself, what if it wasn’t God or angels that greeted you, but Satan instead?!

Alexis: Wow, I don't want to even think about it, unless of course I can read it in your book :-) What are your favorite character traits of Camille and Derek?

Deena: I love their quirky natures. Camille can’t stand people, and when she’s uncomfortable in a situation, random facts usually start flowing freely form her mouth. Derek just doesn’t know his way around women and is forever putting his foot in his mouth. Together, they are adorable. So, socially awkward is the trait that is most prevalent here. Could be the two together cancel each other out.

Alexis: Sounds like fun for the reader. So what type of writer are you? Nighttime or morning? Panster or Plotter? Silence or music?

Deena: I have learned this past year that I am decidedly NOT a plotter. I will come up with a series outline, a book outline, but that’s as far as I can go. Plotting too much shuts me down. So I’m a panster with some plotting tendencies. Ha ha  I can write any time of day now, however, it used to be early morning or late at night. I used to need total silence, still do for hardcore laying down of words, but these days I can write with some noise around me. As long as it’s not music that’s familiar to me.

Alexis: What can we expect next from you? Do you have any new releases coming or a work in progress?

Alexis: Excellent! So we have lots to look forward to (and catch up on). Thank you so much for sharing your stories with us. It's a pleasure having you visit.

Deena: Alexis, it’s been great spending time with you today!

Alexis: For a chance to win a signed limited edition THE BOOK WAITRESS apron, be sure to leave a comment for Deena. If I have contact information, I will let you know when you win, otherwise, check the side column for your name on Wednesday under WINNERS.

For more information on Deena and her books, go to http://deenar116.wordpress.com/

Alexis: Check out this excerpt from THE BOOK WAITRESS.

“Watch your step there, young lady.” A deep, raspy voice broke through Camille Dutton’s frantic mind. “Just up those stairs to the upper deck. It’ll be about eight minutes to the island once we shove off. Enjoy your trip.”

“Thank you.” Eight minutes? It might as well be eight years! Ignoring the nausea threatening to erupt and drown the ferry before it even left the dock, she smiled graciously. The weather-beaten gentleman, the deckhand, she supposed, nodded at her with a crinkled smile and ushered the next person onboard. With every step she climbed up the steep metal stairs, she repeated a mantra to soothe unsettled nerves.

It’s not forever. It’s not forever. Finding an opening at the bow of the ferry, she took up temporary residence against the railing, and dropped the heavily laden backpack from her shoulder to the deck. The churning clouds mirrored her dark mood and hovered dangerously low over the expanse of water. Eight minutes of deep, dark wetness would now separate her from the life Camille had known for twenty-four years. She’d never been further than eighty miles from her home. She didn’t need to travel far; not when she had thousands of books at her disposal to take her wherever she wanted to go.

Her involuntary transfer to the Shelter Island Library, or forced exile as she preferred to call it, would last only as long as it took to find a permanent librarian. Her boss had promised, and she vowed to hold him to it. With her parents’ recently passed, she longed to stay in the house where they’d infused her life with cherished moments. This upheaval at work made their absence all the more painful to bear.

Shelter Island seemed the antithesis of its name. Camille had been lovingly sheltered by her parents and insulated within the comforting walls of her town’s library. She’d read all of the books repeatedly, from cover to cover. Going to this unknown town, living in a strange home, and working at an unfamiliar library left her feeling exposed to more than just the elements. It invited all manner of creature born to lay siege on her well-constructed fortress of solitude.

The ferry’s whistle blew as its engines kicked on and thrust the boat into the Sound. She gasped and closed her eyes, pressing fingers against the cold steel that kept her from jumping ship. A gusty breeze whipped her ponytail into a frenzy of curls that slapped at her neck and cheeks. Eyes smarted and watered as a rush of air assaulted her face. She couldn’t bear to watch as her life receded into the horizon. Looking forward was just as painful, and she pondered what lay ahead.

Alexis: Don't forget to leave a comment for a chance to win THE BOOK WAITRESS apron :-)