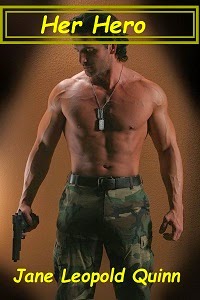 The inspiration for this hot story was something not very "hot" at all. It was winter and cough medications were advertised on TV. One particular commercial caught my eye. A unattractive fellow coughed all day long, irritating his co-workers. Someone offered him a cough drop and poof!, he turned into a non-coughing hunk. A story popped/poofed! into my head. An ugly, bearded, beat up looking man rescues a beautiful woman from danger. Hint: he cleans up nicely :-)

Here's the blurb to Her Hero:  Rowdy Pierce-warrior. Sara Stewart-artist. Macho mercenary rescues posh jewelry designer. Their lives collide in an spectacular rescue and escape across the Egyptian desert. Sara falls for her sexy, body-to-die-for hero and makes the first move. Rowdy, fascinated by the luscious, sweet-bodied, free-spirited woman he saved, takes what Sara offers. He doesn’t expect to lose his heart. Will their lust turn to something deeper back in the real world?

Her nails dug into his shoulders, she opened her mouth to cry out, and suddenly his lips covered hers again. At first, the short, intense sweeps of his tongue, matched by hers, were a powerful massage on sensitive lips. Then, they collided in an explosion so hard their teeth clashed. Passionate, voracious, insatiable emotions became a wild rush of desperate, frustrated craving.
More, more!
A tremendous noise battered her ears.
"Fuck." His guttural exclamation was short and foul. "Show time, baby," he rumbled in her ear.
It was the only way to be heard, the thwapping of the helicopter blades deafened her.
He gave her one final, deep, penetrating kiss, sipping and nipping at her mouth. "My real name is Peter."
He brushed a thumb over her lips, her eyebrows, concentrating his passionate gaze on the separate parts of her face as if to memorize the whole. An ache, deeply embedded inside her, would destroy her if she didn't push it back down. If only the helicopter hadn't come. If only they'd met somewhere else, somewhere civilized. If only this weren't over.
***
Rowdy's heart felt ripped in two. There were a hundred things he wanted to say to her, to hear from her, but they'd run out of time. He allowed himself another final, private look at her beautiful face and devastating blue eyes before he kissed her for the last time, touched her eyelids, the tip of her nose, the crest of her cheek bones, and finally her lips. How could he let her go?
In his business, there was always another job to do. Time to put her on the helo and move on. He pulled her through the tent opening and led her toward the military helicopter, just landed but poised and ready for takeoff at a moment's notice.
No time left. The ache, snaking and swelling through his body, wasn't just from his unrequited lust. She wanted him as much as he wanted her. He clasped his arm protectively around her waist as they ran straight into the noise and dust kicked up by the spinning rotors. Sweeping her into his arms, he tucked her head against his chest to shield her eyes and almost fell to his knees with the powerful hunger for the sweet, luscious, quivering woman clinging tightly to his neck, breathing hotly against his skin.
No time left. He thrust her into the yawning opening, and as soon as her knees landed on the metal flooring, she scrabbled like a baby further inside. A crewman grabbed her under the arms, pushed her into a seat, and buckled a shoulder harness and seatbelt around her. She was handed a helmet, and before putting it on, with tears rolling down her cheeks, she met his gaze through the wide door of the helo.
No, he mouthed, shook his head. Don't cry.
He should be happy this was over and that a large amount of money would be deposited into his bank account. She was grateful, and he'd become too involved. But a healthy jolt of lust connected them when they touched. Hell, just looking at her turned his balls molten. He was a mercenary, and she was an artist from Chicago. They were worlds apart.
Christ, man. You're an idiot.
The helo rose, hovered. He saw bewilderment, then panic in her eyes. Her mouth moved. He heard her voice in his head.
"Thank you, Peter Pierce."
Acting more cocky than he felt, he tapped his forehead in a mock salute, and mouthed back, "You're welcome, Sara Stewart." He watched until the helo was out of sight, a long time in the clear, bright sky. Thoughts of home blindsided him. He'd hated the small Kansas town he grew up in and couldn't wait to leave, couldn't wait to get out in the world and do something important. Now he just felt abandoned, as alone as he'd felt for years. His father died when he was in college, and his mother lived in a nursing home now. He wondered if he'd ever have a chance at a normal life. As normal as it could be for a guy who knew ten different ways to kill a man, and had used them all.
Goodbye, Sara Stewart. The words lingered in his head for a long time before he thought to get out of the hot, desert sun.

Her Hero is available for sale here - http://amzn.com/B00TKXN6KO 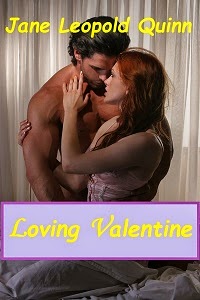 Loving Valentine was the first short story I ever wrote. A critique group I was a member of had a challenge on Valentine's Day to write a snippet based around a red satin, heart shaped pillow. Some of the others wrote a scene like a couple floating in a canoe down a scenic river, the heroine's head resting on the satin pillow. I wrote what became the opening scene of Valentine's Day, as it was titled when first published in 2006.

And that's how Rafe ended up in Valentine's bed having the best sex of his life.
"Ryan doesn't have to know anything about this. No one needs to know." Val lay on her back, head turned toward him.
God, she was spectacular. Rafe had watched her grow up, had seen her develop. He'd always liked her. Knew she had a crush on him. What he hadn't known until tonight was how much he must have always wanted her.
When Rafe and Ryan had gone away to college, he'd put thoughts of Val on the back burner. Then he'd met and married Sybil. They tried to make it work, but there was no real passion. She resembled Val. Maybe that was it.
Rafe put these depressing musings on another back burner and climbed out of bed.
"Oh."
He turned back to Val. Her eyes were full of hurt. He couldn't stand to see her like that, like he disappointed her.
"I'm certainly not going to tell him, Rafe," she said defensively.
Damn, I'm sorry I mentioned Ryan. "Let me get rid of this, honey." He'd brushed the condom off his cock and held the wet mass gingerly in one hand. "Do you have any more?"
"Yeah."
Oh, Christ. Thank God.
When Rafe returned to the bedroom, he was treated to the sight of Valentine lying naked with a box of condoms balanced on her belly. "Oh, baby, you are the answer to a guy's prayers," he groaned the words as he plucked the box off, put it on the bedside table, and drew one out.
Before he could make his move, Val sat up, her expression intent, straddled his waist, and pushed him down on the bed by the shoulders. Then she just held him there. As if he couldn't break her hold. As if he wanted to.
"It's just you and me, buster. I've been waiting long enough for this, and I intend to take my time and enjoy you." She caressed his shoulders, then smoothed down over his biceps, his forearms.
He started to reach for her, but she shut that down.
"No," she whispered reverently. "I just want to look at you. Touch you."
With that, she trailed her fingers back up his arms, fingers light as feathers, tracing the veins and ridges of muscles. He felt his chest, then his face, heat up. Felt his cock stir and blew out a "whew."
"I used to watch you at the pool. I lusted after you all those years. Wanted to feel your hard chest against mine."
"Yours sure isn't hard, sweetheart." He started to lift his hands to touch her, his lips lifted on one side at his joke.
"No, not yet. I'm not at all finished with you."

You can imagine the shock of some of the group's members. I don't think they expected something so raw. At first I was kind of embarrassed, but then I grew to be pretty proud of the imagery I'd created. The scene sat in limbo for a year or so. I sure didn't know what to do with it.

Shortly after my first novel was accepted by Whiskey Creek Press Torrid, I had a chance to contribute to a series of shorts in Torrid Teasers. Here's the blurb of the expanded story:  Valentine, her brother Ryan and his best friend Rafe, ran wild when they were kids. Val's crush on Rafe started early and never died. Recovering from his divorce, Rafe reunites with Val at Ryan's wedding and is thoroughly turned on by the stunning woman she's become. Sparks fly, and their mutual fascination turns to lust. Val and Rafe's lifelong fantasies are fulfilled in one night of breathtaking sensuality. Can this ecstatic reunion turn to love?

One guess as to whether their reunion turns to love :-) I have now re-published this book, changed the title to Loving Valentine, and gave it a new cover.

Besides loving these two stories, I've discovered the pleasures of making my own covers. The Jimmy Thomas site romancenovelcovers.com has been a gold mine of possibilities for me. I've used pre-made covers from that site, and now I've begun buying stock images and adding my own title and author name. I've also used iStock.com and periodimages.com. My covers are simple, but I think pretty effective. Her Hero's cover is downright scorching hot ;-) My eyeballs are smiling.

Sensual fantasies were locked in my mind for years until a friend said, "Why don't you write them down?" Why not, indeed? One spiral notebook, a pen and the unleashing of my imagination later, and here I am with more than a dozen books published. The craft of writing erotic romance has become my passion and my niche in life. I love every part of the creative process—developing characters, designing the plot, even drawing the layout of physical spaces from my stories. My careers have been varied—third grade school teacher, bookkeeper, secretary—none of which gave me a bit of inspiration. But now I'm lucky enough to write romance full time—the best job in the universe! And I'm fortunate enough to have found my own happily ever after husband.
Jane Leopold Quinn
My Romance:  Love With a Scorching Sensuality
http://janeleopoldquinn.BlogSpot.com
https://twitter.com/jelquinnauthor
Amazon Author Page http://amzn.to/1DfiXkP
***
My Books

Ellora's Cave
Lost and Found
The Real Deal
Indie
Loving Valentine
His, Hers & His
The Keeper
Soldier, Come Home
Winning Violetta
A Promise at Dawn
Jake and Ivy
Wooing the Librarian
Home to Stay
The Long Road to You
Her Hero
Siren
I'll Be Your Last