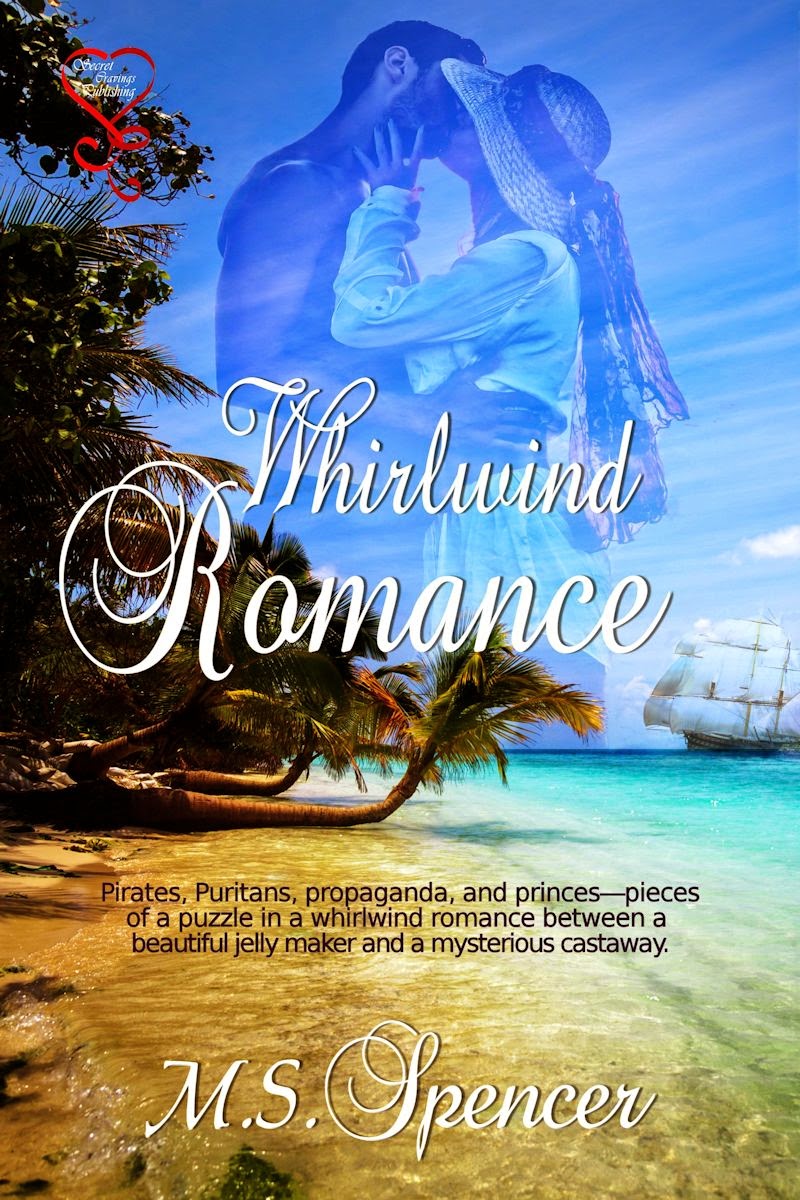 What do pirates, princes, Puritans, and propaganda have in common? Lacey Delahaye, forager and jelly maker, finds out in this romantic suspense set in the western Caribbean.

Up until my thirties, I traveled a great deal, living in many countries with amenities that many would consider below standard. So it wasn't until I married and settled down in an old farmhouse with an acre of land that I could indulge my fantasy growing my own food. We planted apple, plum, peach, fig, hazelnut, and cherry trees; gooseberries, strawberries, blueberries, and raspberries; all kinds of vegetables, including an ill-fated attempt to grow artichokes; and finally, lots and lots of herbs. I built a formal herb garden and planted thyme, lovage, rosemary, chives, tarragon, sage, and lemon balm. The one thing I couldn't get to grow was mint. Yes, the gardeners among you will scoff, but it took me years to get a plot to flourish. When it did, I had to do something or it would take over the entire acre.

So I called upon my sister-in-law, to whom Whirlwind Romance is dedicated. She directed me to an old recipe for mint jelly. Once the mint invasion was under control and I'd mastered the technique, I spent whole summers working up recipes for herb jellies. It was great fun. Despite the fact that I'm not really fond of jelly, they made excellent Christmas gifts.

As I started Whirlwind Romance, I thought about what my heroine, Lacey Delahaye, would do for a living. She lives alone in Florida, her one son grown. What could she do? I thought of the innumerable ecosystems in Florida, from pine uplands, to coastal plains, to palm hammocks—all of which are host to many wild fruits, most of which can be made into jelly. Ah hah! She'd be a jelly maker.

For fun, I added the recipes to each chapter. I hope you enjoy them as much as you do Lacey and Armand's love story.
***
Excerpt  Whirlwind Romance: Slipping briskly into an intimacy
The full moon shone through the window, illuminating Lacey’s nodding head. Armand touched her cheek. “Time for bed.”
Stung, she shot back, “I’m taking care of you, remember?”
He held up a hand. “Sorry! I’d forgotten.” After a moment, he asked, his tone diffident, “Can you help me up?”
Lacey put an arm around his back and together they limped to Crispin’s room. She took his pants and shirt off and folded them neatly. As she turned to leave, he touched her arm. “Stay a minute?”
How could she admit she had to get out of there quickly or she wouldn’t be able to go at all? His handsome face—the strong chin covered with stubble, the pearly teeth contrasting with his tan skin, not to mention the long, graceful fingers he held out to her—all conspired to lure her closer. Her heart led the way, propelling her to his side. She sat down. “What is it?”
“Lacey…um.”
Her body tensed as desire fought to get out and she fought just as hard to keep it in. I have to go. I have to…go. “What?”
His words came out in a rush. “Lacey, the other day—the first night—when you rescued me. When we…we…”
Don’t say it. Don’t say it. Christ.
“I…uh…want you to know I don’t do that on a regular basis.”
His air of  shy ambivalence gave her courage. “I see. You don’t have sex on a regular basis?”
“No, no, it’s not that.” He stopped, flustered. “Or, I mean…er…I don’t sleep with women indiscriminately.”
Should she let him off the hook? Nah. “But you do sleep with a lot of women?”
“No! Lacey, you’re being difficult on purpose. I meant, that I didn’t mean to…you know. It just happened. Forgive me?”
“I—”
Armand interrupted her. “Not that it wasn’t enjoyable.” He seemed distracted, running a finger down her arm. “Wonderful. Fantastic. Too short.” He peered at her. “Lacey, you must know how beautiful you are. You have the most perfect cheekbones I’ve ever seen.”
“Cheekbones?” What the hell is he talking about?
“I’m an amateur photographer. Those cheekbones could belong to a supermodel. Perfectly sculpted. And your nose—” he tapped the tip, “a little pixie nose—it even turns up slightly. Your long, fine hair is the russet-gold of burnished copper pots I once saw piled high in a shop on Martinique. Your eyes…” He closed his. “Your eyes are the blue-green of a freshly mowed cricket field, of the emeralds that grow deep in the mountains, of the lagoon near my home on a blustery day.” He touched her hand. “Then there’s your body—as I remember it—a soft, comfortable, pillowy—”
“Hey!” Lacey shook her head to break the spell. “I think you’ve said enough. Get some sleep.”
She tried to rise, but he slipped his arms around her and drew her close. She wanted to struggle. She tried to struggle. It was no use. The long kiss filled her with a warmth that matched a fire on a cold night, a cup of cocoa, or a hot bath. As he pulled away, the warmth turned to blazing passion. The power of it frightened her. I’ve got to go. She ran out of the room before he could stop her.
***
Buy links:
SCP
Amazon
Barnes and Noble
ARe
Bookstrand
Smashwords
Overdrive
Kobo
Scribd
Amazon Print
Createspace
Inktera
Versent

Starting at the age of four, I have lived or traveled in five continents. I’ve flown the length of the Colorado River to visit dams and ridden a stallion under the nose of the Sphinx. I sailed across the Atlantic on the Queen Mary, and watched the sunset color the Amazon in fiery reds and purples.

After more than  a decade spent in academic pursuits (Middle East studies, Anthropology, Library Science), I finally settled down to work and marriage. I’ve been a librarian,  speechwriter, editor, and non-profit director. I’ve worked for the Senate, for the Department of the Interior, and for both private and public libraries All of this has insinuated itself into my work.

When I’m not writing, I love bird watching, kayaking, swimming, and needlepoint.  I have two fabulous grown children and one perfect granddaughter, and currently divide my time between the Gulf coast of Florida and a tiny village in Maine.
My first full-length book sold in 2009 and I haven’t slowed since. I have published nine romantic suspense/mystery novels. Six—LosersKeepers, Triptych, ArtfulDodging: The Torpedo Factory Murders, MaiTais and Mayhem: Murder at Mote Marine (a Sarasota Romance, Lapses of Memory, the Mason's Mark and WhirlwindRomance were published by Secret Cravings. The Penhallow Train Incident will be released in June 2015.