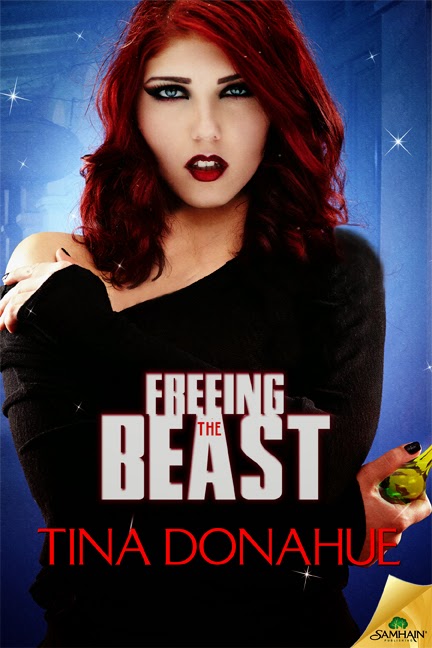 Blurb: No more Mr. Nice Guy Magic is Becca Salt’s business, but it ain’t happening in her bedroom. The half-witch proprietress of From Crud to Stud performs miracle makeovers for paranormal creatures. Once she’s done with them, they’re out the door hunting for hot babes, not hanging around for a too-curvy, plain Jane like her. Her newest client is hot, hung, mouthwatering perfection. What could she possibly improve upon? Eric Diletto. Descendant of Cupid, bred for courtship, courtesy, and all that other gentlemanly junk. What has it gotten him? Dumped time and again for bad boys. He needs Becca’s help for an entirely different reason—regression therapy to release his inner beast. Grrrr. Two potions later, they’re crawling all over each other. Becca aches for a man who loves her as she is, not because he’s under the influence. But Eric isn’t as impaired as she thinks. And he intends to take Becca here, there, and everywhere—anything to convince her his desire isn’t just the potions talking.

Product Warnings A witchdoctor’s nightmare. Contains potions with weird side effects, a sorceress with limited magical skills and a yearning heart, plus a minor god who wants to get down and dirty. Bad, bad boy!

About Tina:
(You know you want to know!): I’m an award-winning, bestselling novelist in erotic, paranormal, contemporary and historical romance for Samhain Publishing, Ellora’s Cave, Siren Publishing, Booktrope, and Kensington. Yay! Booklist, Publisher’s Weekly, Romantic Times and numerous online sites have praised my work, and trust me, I’m forever grateful for that. I’ve had my books reach finals in the EPIC competition, one title was named Book of the Year at a review site, and others have won awards in RWA-sponsored contests. I’m actually featured in the 2012 Novel & Short Story Writer’s Market. Talk about feeling like a freaking star. Before my writing career, I was the editor of an award–winning Midwestern newspaper and worked in Story Direction for a Hollywood production company. Outside of being an admitted and unrepentant chocoholic, I’ve flown a single-engine plane (scary stuff), rewired an old house using an electricity for dummies book, and have been known to moan like Meg Ryan in When Harry Met Sally whenever I’m eating anything Mexican or Italian. Yeah, I like to eat (burp). You can check me out here – yes, I am everywhere!
FB Fanpage: http://on.fb.me/1ChWdD7
Email: tina@tinadonahue.com
Website: http://bit.ly/15Xy6LI
Blog: http://bit.ly/1yRB9k9
Goodreads: http://bit.ly/1wFmIu6
Twitter: http://bit.ly/1ziy4IU
Facebook: http://on.fb.me/1Dl8DHy
Triberr: http://bit.ly/1CE2ec7
Pinterest: http://bit.ly/1yFLeMx
Amazon author page: http://amzn.to/1ChWFkO
My page at TRR: http://bit.ly/1vb7eEc
EC Author Page: http://bit.ly/1Dh9wor
Samhain Author Page: http://bit.ly/1Bvw6mL
Sweet ‘n Sexy Divas: http://bit.ly/1ChWN3K
Romance Books 4 US: http://bit.ly/1JPtfeS