I'm thrilled to announce the newest addition to the Nadia Wolf series: Pocketful of Diamonds. It's a romantic suspense that takes place in the heart of Sierra Leone, known for it's conflict diamonds. Take a look at the book trailer (below)! 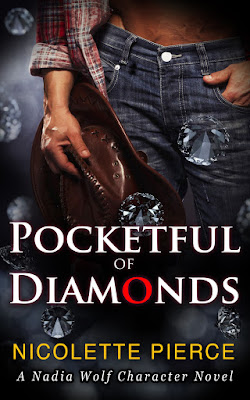 One unforgettable night. Two hearts in tatters. Three foes about to strike.


An award-winning novel from Nicolette Pierce, Pocketful of Diamonds is a continuation of the Nadia Wolf character series.

After Gwen steals from Ian twice, endangering not only his life but that of his family, he relentlessly pursues her for months. But soon after he finds her, outside forces threaten to destroy everything he’s worked for. His diamond mine in Sierra Leone is targeted once again by the feuding government and rebels, bringing war to the small village he has been trying to save. While he fights to keep the villagers safe, sparks ignite when Gwen returns, entwining their fate and revealing a secret she has kept for too long.


Gwen never meant to hurt Ian. It was her job to steal, and she did it well. But when she stumbled upon him a year before, she was struck by his kindness, his unwavering love for the village and its people. He was everything that she couldn’t have but desperately craved. She didn’t think their past night together would cause harm, but it did. She carried the memory and guilt with her, vowing to someday make it up to Ian. But the future didn’t belong to her. So when she was sent to the little village once again, she knew it wouldn’t end well. There would be no hope for forgiveness this time.


As Ian and Gwen are thrust into a brewing diamond war, they have to rely on each other. But that requires mutual trust, something neither are willing to give. They can’t hold out forever. Too much is at stake, including their hearts.

Find out more at NicolettePierce.com
Posted by Nicolette at 8:00 AM