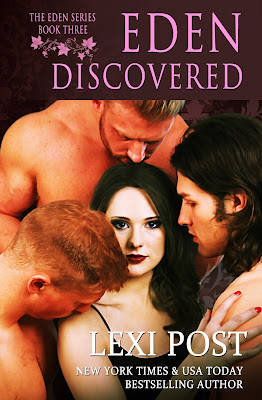 Animal lover Jaelene Upton doesn’t expect to lose sight of her sister when she follows her through a bizarre travel portal, but that’s exactly what happens when she’s distracted by a cute baby porcupine. Lost, she asks for directions, only to be nearly assaulted by one naked man before being saved by another. Her best guess is she’s landed among a native tribe in the middle of a jungle….but odd reflections and energy sources have her questioning even that assumption.

Theron misses his home in Loraleaf and the brothers of his heart, Konala and Rekah. His new home, a lonely cave, is his escape from seeing the woman he loves happily bonded to Loraleaf’s leaders. When he saves Jaelene from lawbreakers, he finds himself drawn to her intoxicating curiosity and despite his best efforts, he falls for her. But no matter what his heart wants, he can’t offer her anything but safety and a reunion with her sister. Unless…

If Theron can interest Konala in Jaelene as well, then he would only have two more obstacles to conquer, Rekah and Jaelene herself. But Rekah, hurt by Theron’s betrayal, wants nothing to do with Jaelene, and when she discovers Theron’s past love, she refuses to be his consolation price. As the battle with the lawbreakers grows near, Theron realizes this time, he may well lose more than his heart.

Excerpt from Eden Discovered:
Jaelene didn’t know whether to laugh or cry to find herself escaping from one naked man intent on rape only to run into the arms of another naked man who wanted who knew what.
“Shhh, we must be quiet if we don’t want him to find you.”
The soothing baritone voice did more to slow her panic than his actual words. She nodded against his arm and he lifted his hand away.
“So in other words, don’t scream.” She raised her head to look at the face of the man that held her and sucked in her breath. His eyes were the deepest brown she’d ever seen. They reminded her of dark chocolate, one of her biggest weaknesses. His cheek bones were prominent and his lips full. The only imperfection was a small bump on his nose.
Those lips lifted slightly. “Yes.”
Wow, she needed to focus. She didn’t know this man any more than the blond one.
His hold on her loosened. “We need to leave here. He will soon tire of chasing my reflection and come looking for you.”
“Your reflection?”
“Later. Can you run?”
“If you mean fast, then no. I think I have small lungs, but if you need help lifting something…” her gaze moved to his arms. “Never mind.”
He turned his back to her as he grinned.
He found her amusing, but she was used to that. No one took her seriously except her sister and her boss.
He bent his knees, and spoke over his shoulder. “Jump on my back. I’ll carry you.”
She looked at his broad back, the muscles tensed for her weight. A glance below it showed a hard rounded butt and thighs the size of her head. Oh, the man was built. “Are you sure?” Now that was a dumb question.
“Yes.”
She glanced back where she’d last seen the blond man headed into the jungle. What choice did she have? At least this man was nice. And seriously hot.


For a chance to win this hand-decorated Venetian mask made in Italy, be sure to enter the Rafflecopter below. Good luck! 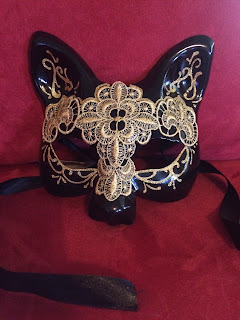