Smile For The Birdie!

Hey guys, good to see ya’all.  Hope everyone is staying cool.  It’s hotter than nine kinds of hell in Phoenix this week, so those of you in cooler places should count your blessings!

Okay, so I have an update on Little Bird…remember him?  He’s the dove my neighbor rescued and hand-raised.  Well, he’s still the neighborhood party boy and still comes to visit.  (And he’s been asking me where the Butterscotch Martini Girls have been lately.)  LOL

Anyway, the other day my neighbor came over to visit a bit and she and I were sitting out on the back patio talking.  Suddenly, there is a big flutter outside the screened in porch and it’s Little Bird swooping back and forth.  He can hear us chatting on the patio and he’s upset that he can’t get to us.

So we continue to talk, thinking he will light somewhere and calm down.  Uh…nooo.  The longer we talk, the higher his stress level soars.  Within ten minutes, he’s flying back and forth looking for a way through the screen.  He tries to land on the screen, but can’t get hold of it. 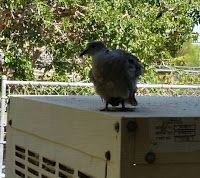 Then he lands on the big cooler that we use to cool the patio, and is craning his neck to see us.  As you can see, he's all puffed up because he's getting mad.  Then he goes back to swooping back and forth.  Occasionally, he will land on the ground and pace back and forth, but he’s soon airborne again. 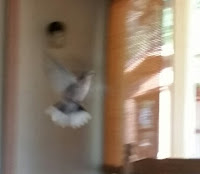 Finally, we tire of teasing him and we are finding it harder and harder to visit over the sound of his flapping wings and frantic cooing.  So I go and push the patio door open.  I’m barely back in my seat before he spots the open door and swoosh, he swoops in the door, almost knocks himself out on the big patio heater, banks, and comes to a not-so-smooth landing on my neighbor’s head. 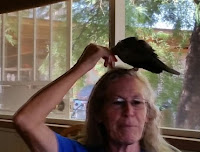 Now he’s pissed that he couldn’t get in earlier, so when she tries to pet him, he won’t let her.  Instead, he is trying to bite her.  Fortunately, a dove’s beak is shaped in such a way that it’s sort of like being bitten by a toothless puppy.  So Dawn leaves him to stew while we try to continue visiting.

Because it’s freaking hard to talk to a woman with a bird on her head! 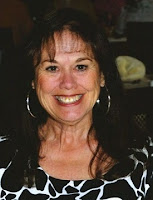