The best place to murder someone starts in the Cascade Range of Oregon.  Although the main target stayed alive, others died along the way.


A blizzard filled the mountains with snow and ice, closing roads, and cutting off communication.


This is when Chris Jacobs checks the smell of smoke a distance from his own cabin.  He finds Gianna Trask and her teenage daughter hiding out in their vehicle near a burnt out cabin.


Naturally, he takes them to his cabin, Chris and Gianna exchange glances of interest and arousal, and they’re stuck together for a few days. 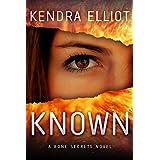 I enjoyed the suspense part of the story as people kept getting murdered by a killer who couldn’t do his job very well –in other words, he still hadn’t gotten his main target, Gianna.


I was all for Gianna and Chris getting it on since they didn’t have a lot else to do in a cabin with a fireplace and beautiful snow tumbled over the forested range outside their  windows, but I felt I didn’t “know” them very well.  Gianna had a flat personality and Chris was too quiet.


I’ve decided quiet characters aren’t given the best opportunity to express themselves.  Chris is chivalrous, though, in saving the ladies and taking care of them until the killer is discovered.  I’ll give him that.


Known is the fifth story of the series Bone Secrets.  If anyone has read any of the other novels of the series, I’d love to hear what you think!