CATCH THE RAIN by Paty Jager and a whole Cowboy Six Pack! 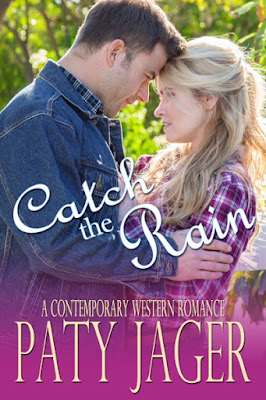 Thank you for having me here today, Lexi!

My novella in the Cowboy Six Pack Anthology is Catch the Rain.  While the title doesn’t sound like a western romance, when you read the story and understand the meaning of the words, and how Zach helps Kitty “catch the rain”, you understand the unconditional love he is giving her. Not to give too much away, but Kitty feels she is unworthy of love and a job any better than a stable hand.  She was dumped in foster home after foster home and finally ran away at the age of 14 and landed a job as a stable hand at a horse training facility.

Lucky for her, Zach ignores the things other people say about Kitty and connects with her while they are singing karaoke. Her voice and eyes haunt him. When he meets her in her own element, he discovers she deserves better than the life she has settled for.

Catch the Rain
By Paty Jager

Running from her past, Kitty Baxter catches a glimpse of her future—if she’s brave enough to believe in herself and the kind-hearted stranger who claims she deserves love.
Focused on setting up his new veterinarian practice, Zach MacDonald becomes sidetracked by a karaoke singing beauty with a secret. He sees what others don’t, and becomes determined to make Kitty see that anyone can learn to catch the rain.

Excerpt:
Kitty’s heart soared as she blended her voice with the man’s. He had a beautiful baritone. She stared into his eyes. The warmth and acceptance she saw in their depths started her belly quivering. She’d avoided men, except for two disastrous dates, ever since school and the bullies that had harassed her for being unable to read and having ratty clothes. She’d been an easy target. But she’d shown everyone. She’d run off at fourteen and found a place to live, and she enjoyed the work she did.
The glint of challenge in the man’s eyes had her embellishing more at the end. She held onto the note and finished with a flourish. The music stopped, and she peered into his eyes.
A roar of voices and thundering applause, reminded her she stood on a stage staring into a stranger’s eyes.
She ran off the stage, dropping the microphone on the table. On her way past her table, she snagged her jacket, before running out the back door of the Sidewinder. She didn’t catch her breath or stop her momentum until she sat behind the wheel of her 1960 Ford pickup.  Her heart raced, not from her hurried departure, but from the memory of the man’s eyes.

Here are the blurbs from the other five books in the Cowboy Six Pack Box set. 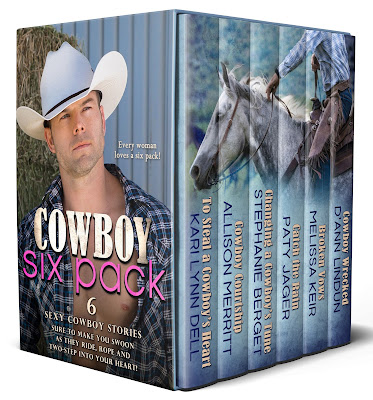 Every woman loves a six-pack! Six sexy cowboy stories sure to make you swoon as they ride, rope and two-step into your heart!

To Steal a Cowboy’s Heart
by Kari Lynn Dell

Shannon McKenzie is one of the best investigators the Montana Department of Livestock can sic on cattle and horse thieves, and her definition of undercover has always been strictly professional. Hotshot rodeo announcer Tyler Jernigan was a dangerous exception…one she nearly paid for with her life.

Over a year later Tyler is still recovering from the devastation of being caught in Shannon's net--both as a lover and a suspect. Her sting operation left his brother in prison, Jernigan Livestock Auction closed for good, and Tyler convinced that the Shannon who’d thrown him for a loop and then disappeared never actually existed.

Now Shannon and Tyler have come face to face once more, this time on the rodeo circuit. She knows he’ll never forgive her for destroying his family, but she’ll have to get close enough to persuade him not to blow her cover. Does he dare trust the master pretender and risk letting her steal his heart…again?

Dean Trulove, a third-generation owner of Trulove Cattle Company and Stockyard, has waited for the day he’d inherit the business. Unfortunately, it comes at the cost of his mother’s heart problems and his dad’s sudden retirement. To relieve some of the pressure, he attempts to pick up a damsel in distress at the local watering hole. Even when he discovers she’s his new employee, he can’t flip the off switch on his object of desire. All the warnings in the world from his old-fashioned father won’t wrestle him away from a woman as skittish as any unbroken horse that’s passed through the stockyard pens.

London Bingham is in a bind—she’s got an unexpected bundle of joy on the way, but luckily, she accepts a new job with an understanding boss. Her only problem is, her sexy boss’s dad, a formidable man with an ages-old stick up his derriere about unmarried mothers in the workplace makes for an uncomfortable situation. As much as she’d like to give in to her persuasive boss and build a relationship, it’s causing work-place trauma and domestic drama.

To Dean, it’s clear that London needs a good ol’ cowboy to show her that she can have it all—a family, a career, and a man with a heart wider than the Arkansas River to remind her that even a woman from the wrong side of the tracks can find the happiness she deserves.

When her fiancé demands Mavis abandon her goal of barrel racing at the National Finals Rodeo, she chooses to follow her dream and loses the man she adores.

Dex wants nothing more than to marry the woman he loves and build a future on his family’s ranch, but when he pushes her to settle into life as a mother and rancher's wife, she bolts.
Years apart haven’t dampened their desire, but can they see past their own dreams for the future and invent a life they both love?

Rick and Julie Tyler are happily married ranchers, who raise and train horses. When money becomes tight, Rick becomes a firefighter in order to make ends meet but he’s forced to move out of state if he wants more money and a chance as a station chief.

Distance causes problems for the happy couple and turns their world upside down. When Julie puts her foot down, will Rick decide to make the right choice or will their vows break?

There’s nothing Rayanne Whitfield wants more than a family to call her own. Top bull rider Luke Greer is badly injured in a riding accident, leaving him unable to sire children. Can these two find a way to build a life together?