THE TOUCHSTONE OF RAVEN HOLLOW by Bette Bolte 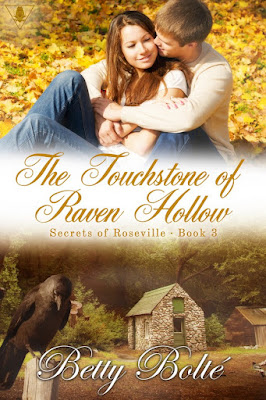 Thanks so much for inviting me to stop by today to share my new release, The Touchstone of Raven Hollow (Secrets of Roseville Book 3)! Set in the small town of Roseville and an enchanted valley in southern Tennessee, this story was such a fun one to write and I hope you’ll enjoy reading.

Once I chose to use ravens in the title, and then in the story as a symbol and allusion to Edgar Allan Poe’s poem “The Raven,” suddenly ravens were everywhere! One day, while writing Touchstone, an email popped into my inbox from the Audubon Society. Now, I’m not a member and did not subscribe to their mailings, so this was rather surprising to me. Even more so was the fact that the lead article included how to tell the difference between crows and ravens! Naturally, I had to go find out what they had to say, and they even had the sound of the raven’s croak. If you’re curious, you can listen to the difference yourself here. Useful details for my story!

When I settled on the title of The Touchstone of Raven Hollow I didn’t think about whether the state park where the story is set on the Cumberland Plateau in Tennessee would have a population of ravens. I figured I’d have to make one up as part of the enchantment of the hollow. But then when I was researching the wildlife and birds of thestate, I came across the fact that ravens do live there. And in the area of the plateau where Grant takes Tara hiking. How cool, right? I thought I’d have to invent an “unkindness” or flock of ravens living up there. But nope! The coincidences were and still are very interesting to think about. Have you had any similar experiences?
Thanks again for inviting me! Please feel free to connect with me at any of the social media sites below. I love to hear from my readers! I hope you enjoy The Touchstone of Raven Hollow!

Blurb for The Touchstone of Raven Hollow:

He dug for the truth and found her magic.

Tara Golden has hidden her healing power all her life. But occasionally, she uses her abilities on people passing through town, sure they’d never figure out what saved them. Now a tall, sexy geologist is asking questions she doesn’t want to face, and he isn’t going to take no for an answer. There’s no way she would reveal her abilities and her gifted sisters for a fling.
The latest medical tests divulge geologist Grant Markel’s fatal condition is cured, but the scientist within him won't accept it's a miracle. When he meets the sexy, mystical witch who may hold the answer to his quest, he’s determined to prove she’s full of smoke and mirrors despite their mutual attraction.
When they are trapped in an enchanted valley, Tara must choose between her magical truth or his scientific beliefs. Can she step from the shadows to claim her true powers before it’s too late?

Buy Links for The Touchstone of Raven Hollow:

Betty Bolté writes both historical and contemporary stories featuring strong, loving women and brave, compassionate men. No matter whether the stories are set in the past or the present, she loves to include a touch of the paranormal. In addition to her romantic fiction, she’s the author of several nonfiction books and earned a Master’s in English in 2008. She is a member of Romance Writers of America, the Historical Novel Society, the Women’s Fiction Writers Association, and the Authors Guild. Get to know her at www.bettybolte.com.