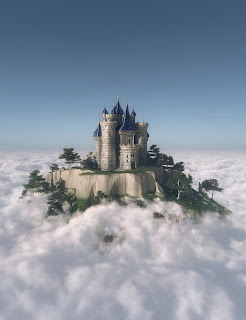 Hello, gentle readers!
My home is my castle. I’m sure you’ve heard that expression before. I know I have, but in my case, it’s true. My home is my sanctuary, the place I go to when the day has been hard and frustrating. I know, when I walk through the door, I will be welcomed.
Granted, it’s not the newest house on the street (in fact, it is the oldest). It’s not the grandest, either. It’s actually rather small compared to the newer houses that went up on either side of me. Still, it’s mine (well, mine and the mortgage company). I’ve been here for twenty-three years and I have no desire to leave. Not yet anyway.
Like any grand lady who is beginning to show her age, mine recently needed a little “face-lift”. We had an awning in the back that was, quite frankly, falling down (the posts had been sunk into dirt and well…the wood was rotting and sinking). I was convinced a stiff wind would take it, as well as half my house so we, the DH and I, decided to do something about it. We took it down.
Unfortunately, when we did so, all the siding from the awning up to the eave of the roof came down as well (no one had any idea the awning had been glued to the siding…yes, I said glued). What a mess! We also had no idea what was behind the siding. As I said, what a mess! Life is certainly full of little surprises!
Did I cry when I saw what was behind the siding? No, I didn’t, but I sure as heck wanted to! They say any kind of home remodel is the stuff of nightmares. We’ve all heard the stories. Visions of dollar signs flashed through my head on what it would cost to fix this mess I had helped to create, not to mention how long it would take. Would it rain and do more damage before I could find someone (yes, it did rain, but thankfully, there was no more damage).
It’s amazing how fast something can get done when you’re desperate! The phone calls, the repair guys coming out to give me estimates, etc. And honestly, it didn’t take as long as I thought (again, thankfully…I sure didn’t like being that stressed!) I wasn’t even able to work on my latest story during this time, my usual way of dealing with stress).
As of this writing, though, it’s all done. A concrete pad has been poured, the siding has been fixed, and I now have a new awning that’s beautiful and sturdy and won’t fall down the next time the wind blows.
And it’s lovely. A beautiful place to sit and relax as the sun is going down and think about what I’m going to write about next. To all those who helped me keep my sanity, a heart-felt Thank You!