Alexis: Good point! So, what is your new release Mistletoe about?

Amber: Mistletoe is about the first Christmas of Calla and Scott from my novella Dragos: Burned.

Something’s not right. Calla can't seem to stop the emotional rollercoaster taking over her emotions. But when she finally finds out why, she's going to celebrate by making Scott her own personal body buffet.

Alexis: Was it difficult writing a sequel to a Romance that already had a happy ending? How did you come up with a new conflict? Or had you planned this sequel all along?

Amber: Oh wow. Was it hard. There’s four books planned in the Dragos series with Calla’s brothers, but that’s different because it takes new characters and conflicts. This sequel, trying to come up with the idea seemed almost impossible at first. Here Calla and Scott were, happy and ready to stay together. Once I found my idea, writing wasn’t too hard. This was my first attempt at a short story with previous characters. I finished and sent it to my critique partners. Then buried my head in the sand when the comments came back. With a strong cup of coffee in hand, I rewrote parts so that first time readers would get to know Calla and Scott if they’d never read Burned. I hadn’t realized while writing that I wrote the short story as a continuation of the book, rather than a stand alone. It works better now :) 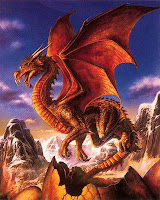 Alexis: I can imagine that was very difficult. Dragons seem to be coming into their own. Are there special powers your dragons have, limitations? How did you decide on the “rules” for your creatures?

Amber: Well, my dragons are based on different mythos’ from around the world, with a bit of imagination thrown in. Most can shift with their clothes on. Breathing fire, for women, is a product of the Dragon Burn, once they find their destined mate. The dragons are different colors. They can heal fast, like other shapeshifters, but it takes a lot of energy. I wanted other magical creatures in my stories, so I devised a way different types could mate. Most children take on the powers of their mother, and some have no powers at all.

Alexis: Sounds complicated, but very fun! What prompted that first germ of an idea for you to write Dragos: Burned?

Amber: I’ve always loved dragons. A few years ago, I was thinking about what would happen if a dragon fell in love with a fireman. When I sat down to write it, I knew I wanted to write spicy and short, so I outlined for a novella -- and well, there you go. Since Calla has seven brothers and sisters, I figured for a series.

Alexis: Seven? That will make for a nice long series. I bet your readers are thrilled. I see that Calla and Scott are your first couple. What are your favorite character traits of each of them?

Amber: I love Calla’s spunkiness. My friends call me Snarky, which I guess is nicer than smartass :) With her overprotective father and brothers, she’s ready to throw off the restraints and prove herself no matter what. I always pictured Scott as a fun-loving mix of alpha and beta, but a man who never lets anything interfere with his responsibilities. Plus, he’s sexy. Their relationship was a blast to write about.

Alexis: Hmm, I think I married a Scott :-) Can you tell us a little more about the Dragos clan?

Amber: Ah. The Dragos clan. Well, there’s eight siblings. Their mother was a dragon and their father is a water elemental. None of my Dragos men curse because their mother taught them not to. The men are very protective of their sisters and their mates. Even though they’ve been through some hard times, and they squabble like all siblings do, they’re always there for each other.

Alexis: Sounds like the typical Dragon family ;-) What can we expect next from you? Do you have any new releases coming out or a work in progress?

Amber: I do :) I have a ton. My next release is Dragos 2: Scorched in January 2011, and it’s the story of Calla’s older brother, Garreth. I’m really glad because I’ve had a lot of requests from readers for his story. There are two more stories in the series. I’m currently writing Dragos 3: Blazed, with Calla’s younger brother Ty and Bree, the fire nymph he falls in love with.

I have a short story coming out with Ravenous Romance, in their Fairy Tales Retold 2 Anthology, Alice (M/F/M Ménage). Alice takes a break from College and wakes up in Wonderland once more. But this time, the Mad Hatter and the Cheshire Cat, in his human shift form, are ready to show Alice exactly the type of men they are.
I’m also hoping to soon place my novel length erotic romance Tiger Princess, which is about tiger shifters. Tiger shifter Valaria Darkolos must find her runaway betrothed and either convince or con him to return home, before her crown is lost to family who wants nothing less than to see them both dead.

Alexis: Wow, you do have a lot coming up. That’s great news! Thank you so much for taking a moment to visit Happily Ever After Thoughts. We really enjoyed learning more about your stories :-)

Amber: Thank you so much for having me, and letting me go on and on :) Have you noticed yet I love to talk. Happy holidays to all.

Everyone can also get 5% off any of my books from Changeling Press using the coupon code AK_Birthday from 12/6 to 12/19 as a present from me to you.

Alexis: Yeah, a bonus! For a chance to win Amber’s Mistletoe, be sure to leave a comment for her. Winner will be announced on Wednesday. Check the side column for your name and email me. And if you don’t win, you will still have time to buy her book with the special 5% off rate she is giving to Happily Ever After Thoughts readers. Don’t miss this chance!

For more on Amber and all her books, go to www.AmberKallyn.com

Alexis
Posted by Alexis Walker at 4:00 AM