First of all, I’d like to thank Alexis, Dawn and Marie for guesting me on their lovely blog. It’s so nice to be here today, ladies, and visit your cyber home.

And for one intrepid reader who makes their way to the end of this monster post and leaves a comment – I’ll give a digital (pdf) copy of BEYOND A HIGHLAND WHISPER. Jasper (my writing partner) will select the winner on Wednesday morning and the winner will be announced on my blog as well as contacted via email.

I adore writing paranormal romances. I get home from the day job, fire up the laptop and disappear into my worlds. *happy, contented sigh* I admit it. I’m addicted to writing and one of the reasons is because it’s a safe, solitary process. You guessed it. I’m painfully introverted. A people watcher. One of those who keeps to the shadows and takes in everything all around them.

So, imagine my horror when the following scene played out: It’s the end of a long day. I stumble into the house with my over-stuffed purse and lunch bag falling off my shoulder and the mail sliding out of my grasp. I make it to the kitchen island and throw everything onto the counter before it hits the floor. Finally. I’m home. Safe in my nest. The kitchen smells great. Hubby’s at the stove stirring a pot but something’s not right. He’s got “that look” on his face.

We’ve been married over thirty-one years. I recognize “that look” in a heartbeat. “What have you done?”

The “look” blossoms into a mischievous grin. “I’ve been busy today calling all the newspapers, TV and radio stations in the area. I’ve got you all kinds of contacts lined up. Look at the notepad over there.”

My heart stops beating and falls like a chunk of ice into the now roiling pit of my stomach. “You did what?”

He returns the lid to the pot he’s been stirring (I know – ironic, huh?) and turns to tap excitedly on the notepad. “Look! All you have to do is send press releases to all these places. They said they’d love to know more about you and your book since you’re a local author. I bet they’ll even want to talk to you. This one radio station does interviews all the time.” 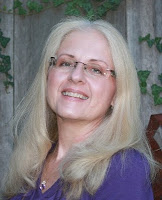 “What?” I squeaked when I found my voice. “I can’t do that. I don’t know how to write a press release. I can’t TALK on the radio. Out loud. To people.”

Then he turns into understanding, supportive psychoanalyst husband. I hate it when he does that. “Yes. You CAN do this. Look at all you’ve already done. You’ve come so far. The girls and I believe in you. It’s time you believed in yourself.”

Damn him. Don’t you hate it when they’re right? Grrrr. So, with the help of Google and some priceless advice and guidance from my wonderful “Roses” at The Wild Rose Press, here’s the press release I wrote:

Contact Information: Maeve Greyson (You need to include your email address and phone numbers here. I deleted them for this post. I’m sure you understand.)

Which will triumph? The vengeful wrath of a cruel witch or a love spanning across time?

The last time Latharn MacKay walked among his kinsman was in Scotland of 1410. Sensuous and charismatic, all the women wanted him, but none captured his heart. Latharn's charm became his curse when a wicked sorceress didn’t accept his rejection. She snared his soul into a crystal globe until the one woman destined to be his love whispers his release. Now all Latharn has to do is find her and convince Nessa to break the curse without speaking a word to tell her how.

One of the youngest archeologists in St Louis of 2010, Nessa credits one thing for this achievement: the recurring dream of a heart-stopping Highlander since the summer she turned eighteen years old. Little does she know, he's not some fantasy cooked up by her subconscious. He’s a trapped soul determined for Nessa to end his six centuries in hell. Can love prevail over the dark magic of a woman scorned?

About the author:
Maeve Greyson writes paranormal romances with a Celtic twist from her cozy little home not too far from Kentucky Lake. Tucked away in the middle of nowhere, she pours her daydreams into the keyboard while her husband of over thirty-one years and Jasper the dog keep the household running.

Her debut novel, BEYOND A HIGHLAND WHISPER, releases from The Wild Rose Press on February 18, 2011. She just contracted a second book, THE HIGHLANDER’S FURY, also with The Wild Rose Press. Maeve is a finalist out of 500 writers entered in the Kensington Brava and RT Book Reviews Writing with the Stars Contest. Her paranormal romance, ETERNITY’S MARK is one of three remaining entries in the final round for a publishing contract from Kensington.

For more info about Maeve and her books: Website: http://www.maevegreyson.com/

---------
I’ll let you know if anything comes of my little press release. All I can say is God help them if they ignore it because Hubby still has all their numbers.

And if you’d like to give a poor shy author a little love and vote for Eternity’s Mark in the FINAL round of Writing With the Stars –please click below, and it will take you to the voting link for the final round. Thank you EVER so much!

The rest of Maeve’s links:

Beyond a Highland Whisper excerpt:

However, tonight Latharn was different. He didn’t go any further then the hungry possession of her mouth or the desperate, crushing embrace. Nessa sensed he needed this night to be different. His body tensed beneath her touch, he restrained his caress as if he wanted her to reason rather than just shatter into mindless bliss.

He raised his head and gazed into her eyes. Nessa flinched at the depths of pain and frustration etched in his face. He struggled, trying to communicate, to connect with her deepest emotions without the use of words. He took his palm, flattened it against his heart then placed it upon her chest. His brows drawn together in a questioning frown, he tilted his head and waited for a sign that she understood.

Her lower lip quivered at the very obvious gesture. Nessa whispered and covered his hand with hers. “Are you telling me you love me?” Her whisper caught in her throat.

One corner of his mouth pulled up into a relieved smile as Latharn nodded and brushed his lips across hers. He took a deep breath as though steeling himself against his own deepest fears. He took her hand and repeated the heart touching gesture from her chest to his. Then he raised a brow and awaited her answer, anxiety filling his eyes.

A lone tear escaped down her cheek as Nessa stared at her hand splayed upon his broad chest. “You know I love you,” she murmured with a moan. “I just wish that you were real.”

He squeezed his eyes shut, pulling her into his arms to cradle her against his chest. Holding her close, he stroked her hair as she gave way to tears.

If you liked this, don't forget to comment for a chance to win BEYOND A HIGHLAND WHISPER :-)
Posted by Alexis Walker at 8:00 AM

Email ThisBlogThis!Share to TwitterShare to FacebookShare to Pinterest
Labels: Alexis Walker, Beyond A Highland Whisper, Meave Greyson, The Highlander's Fury