Driving on the Left in St. Croix. 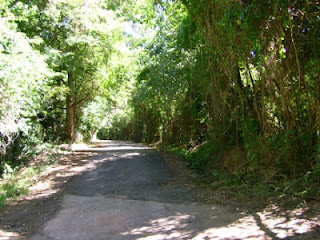 My adventures living on a Caribbean island. Welcome to my monthly, or not so monthly adventures. We try not to commit too soon here on island :-)

When visitors come to St. Croix, they are often nervous about renting a car because here we drive on the left. Having driven in Scotland though, I had no problem adjusting. It is easy to remember which lane to be in because the driver is always closest to the side of the road, not the center. However, it can be nerve wracking for passengers because they are facing head-on traffic and are not in control of the vehicle. This can be especially scary around curves because for some reason, people here seem to forget about the center line on the road when taking a curve, and a passenger finds him or herself facing a car head-on in the middle of the road. My fellow blogger, Marie Patrick, had this to say when she came for a visit.

It’s been a couple months since I’ve returned from my vacation in paradise (ie. St Croix), but I’m still having a few flashbacks about driving on the “wrong” side of the road. Cars coming at me was a little hard for me to take, but you know, it only takes a day or so before you become used to it (and find yourself trying to drive on the “wrong” side at home).

My husband, bless him, saw the whole thing as an adventure. He LOVED driving on the wrong side of the road and did really well with it. Nope, didn’t seem to bother him at all and I think he rather enjoyed seeing the expression on my face when another car came too close (I couldn’t help myself). We had no mishaps (well, only one, where he went through a stop sign, but we forgive him for that) and if I’m not mistaken, he can’t wait to go back to St Croix and do it again! 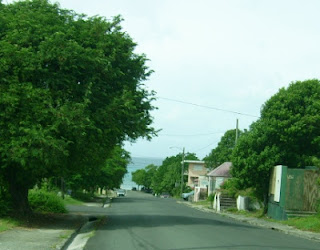 See, not so bad. Actually, there are far more pluses than minuses to driving in St. Croix. First, people are generally polite, more so than on the mainland. Here, cars on the main roads will stop and let others enter the traffic flow from side roads and driveways.  In addition, people will stop the main traffic to allow a person to take a right turn (across traffic). Believe it or not, this actually makes traffic flow better.  Since the speed limits are between 30-40 miles an hour and there is only one lane of traffic in both directions (except on our one highway), slowing down to allow someone into traffic doesn't really hold up the flow.  And a quick toot on the horn tells drivers to "go ahead" and a return horn blow is "thank you." 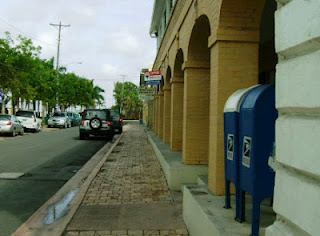 While it may not seem like an advantage to be moving so slow, it actually is because it gives a driver the chance to avoid the potholes, and in some instances, a blown-out tire. It is generally accepted that drivers will drive on the grass or dirt on the side of the road to avoid potholes, or in many cases, into the oncoming lane of traffic.  However, this is done with caution, and on occasion it is necessary to stop before the traffic is clear so that the oncoming traffic lane can be used to avoid a pothole. This is tolerated by the drives behind because they don't want to hit the hole either. And besides, they are used to stopping on the road because if someone sees someone they know out in his or her yard, and it is not a main road, it is common for a driver to simply stop and yell out. On the main roads, however, a simple horn toot to say "hi" is acceptable because to not acknowledge someone is the epitome of rudeness, even if one is driving and the other is doing yard work. 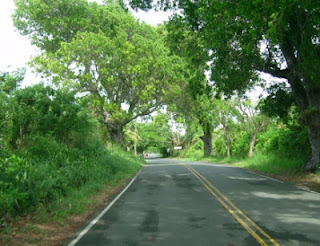 The last advantage to the slow pace of the roads here is that it allows a driver to avoid killing animals, most often goats, dogs, and chickens.  Though in my case, there is one stretch that I am very careful on because I often come around a bend to find anywhere from 2 to 9 horses hanging out in the middle of the road. In fact, I like the slow pace so much, I tend to avoid the one highway we have here with two lanes on each side of the divider and a 55mph speed limit. It just seems too fast for this island girl and just because it is a highway doesn't mean it doesn't have potholes! Besides, the highway doesn't even cover half of this almost 30 miles-long island.

Lesson #4
While driving in St. Croix maybe a different experience, it is definitely an enjoyable and positive one. Having just returned from a trip to Phoenix, Arizona, I can honestly say, I much prefer driving here at on St. Croix :-)