Today we are interviewing Cynthia Racette, who writes women's fiction with romantic elements. She is giving away two copies of her book WINDSWEPT.

Alexis: Hi Cynthia, thank you for visiting Happily Ever After Thoughts :-) Why did you decide to write women's fiction?

Cynthia: A woman's life consists of her entire family, kids and all and I think they should all be part of her story. Also, there are many dramatic romances that emerge after the wedding that make for great fiction. There are deaths, divorces, infidelities, emotional ennui and all kinds of things.

Alexis: Very true. I understand your debut novel, WINDSWEPT, just came out. Can you tell us a little about it?

Cynthia: WINDSWEPT is about a sailboat and the family that owns it. The boat has been part of their lives since the wedding and has been the scene of many happy family events and glorious sunny days. When the husband is unfaithful, the family is thrown into turmoil, with our heroine having to learn independence and the hero trying to come to grips with what he did. Other people and events conspire to impede their progress towards repairing their family but Mother Nature might have the final say.

Alexis: Oh, I like that :-) Where did you get the idea for this story? 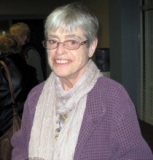 Cynthia: My husband and I love sailing and I got the idea to create what is essentially an allegory around a sailboat. I wanted, too, to show that when something like unfaithfulness happens, both parties are at fault and both suffer. There's no good guy or bad guy.

Alexis: Really? Interesting. What are your favorite character traits of Caroline and David?

Cynthia: Caroline is very loving and very loyal to her family and that's why David's betrayal hurts her so much. David is very passionate and intelligent with strong scruples and that makes it difficult for him to reconcile his actions.

Do you have a particular writing schedule you stay with or do you write when the muse strikes?

Cynthia: I generally write in the mornings and early afternoon but, if the muse taps me on the shoulder, I'll work through supper and bedtime.

Alexis: So what can we expect next from you? Do you have any new releases coming or a work in progress?

Cynthia: I have a WIP about a young family devastated when the father is killed in an accident. The young boy believes it's his fault the father is killed and his teenage sister acts out with shoplifting and drugs. The detective who arrests her becomes attracted to the young widow, which makes for conflict between her and her daughter.

Daughter: "I can't believe you're going out with him. It's his fault I got arrested."
Mother: "It wasn't his fault. It was your fault."

Alexis: Yes, that is good conflict.  Thank you so much for sharing your story with us. It's a pleasure having you visit.

Cynthia: I enjoyed it Alexis. Thank you for having me. Kisses!

Alexis: For a chance to win WINDSWEPT, be sure to leave a comment for her. If I have contact information, I will let you know when you win, otherwise, check the side column for your name on Wednesday under WINNERS :-)

For more information on Cynthia’s books go to http://cynthiaracette.com/Home.php

Alexis: Don't forget, for a chance to win a copy of this book, be sure to leave Cynthia a comment :-)
Posted by Alexis Walker at 12:30 PM