Today we are interviewing Cate Masters, paranormal romance author, who is giving away a copy of THE MAGIC OF LAVENDER.

Alexis: Hi Cate, thank you for visiting Happily Ever After Thoughts :-) You have a series called The Goddess Connection. I love the name and the ties to Greek Mythology. What is this series about?

Cate: Hi Alexis! Thanks so much for having me at Happily Ever After Thoughts! I’ve always loved mythology, too, and I love tying it to present day with an urban fantasy feel. The premise of The Goddess Connection series is: Every woman should embrace her inner goddess. What’s your connection?  I now have finished two, with several more novels in this series in mind to follow. In each, the heroine will be somehow connected to a goddess. Her lifelong quirks will become strengths once she finds her true place in the world, and accepts herself for who she really is.

But we don’t actually need to be related to a goddess to celebrate our unique powers. We all deserve to be treated like goddesses, don’t we? :)

THE MAGIC OF LAVENDER launched the series, and I’m thrilled that it’s received wonderful reviews and was a Night Owl Reviews Top Pick. You can view the book video, read the reviews, an excerpt and the first chapter on my blog: http://catemasters.blogspot.com/2009/05/magic-of-lavender-contemporary.html
Alexis: The premise is perfect! Of course, we should all be treated like goddesses, but I have a feeling that includes having certain responsibilities as well :-} Now the second book in the series, DANCING WITH THE DEVIL, was recently released. Can you tell our readers a little about it?

Cate: The myth of Persephone and Hades always intrigued me. Hades is the worst villain of all, yet somehow he won Persephone’s heart, which meant he had to have some redeeming qualities. I wanted to explore that a bit, and tie my heroine, Lily, to the goddess Persephone.

Lily MacInnis has the luck of the Irish – against her. All her life, she never could catch a break. But now, something’s about to catch her, and dump her suitcase of secrets on the floor. Some secrets, even Lily hadn’t known. Like her father’s an angel, and her mother escaped from Hell. Literally. And now Hades and Persephone – her grandparents – want her to return to the Underworld. Lily is The Destined One, promised to Zeveriah, Archduke of Section Six, and Hades’ up and coming CFO.

Not in Lily’s plans – she’s fallen for Bodie, the Ruling Angel of the Sixth Heaven.

Bodie can’t let Lily fulfill that destiny. But will Bodie risk losing everything to keep his promise to ensure Lily stays safe?

Part goddess, part angel, part demon, can Lily summon the powers she never knew she had to free herself and make her own destiny? 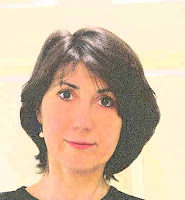 Alexis: Wow, where did you get the idea for this story?

Cate: This is an example of how story ideas can come in strange ways, lol. My sisters had visited Ireland and brought me back a keychain explaining the origin of my hubby’s last name. According to the keychain, it literally meant “descendant of angels.” (I already knew that, lol) So Lily’s last name is the Irish version. I thought it would be interesting for Lily to have Persephone and Hades as grandparents, but an angel for her father, making her torn between two worlds.

Alexis: That's a great idea! I love that it started with a keychain :-) What are your favorite character traits of Lily and Bodie?

Cate: Lily’s goddess material but doesn’t recognize it until the situation puts her to the test, and then, of course, she shows her true strengths.

Bodie’s an angel – what’s not to like? :) He falls in love with Lily and risks everything for her. True hero material.

Stories usually play like movies in my head while I write, providing a strong image of the characters, and a few years ago I started a blog series called Casting Call. I’d love for you to check out DANCING WITH THE DEVIL'S Casting Call: http://catemasters.blogspot.com/2012/03/casting-call-dancing-with-devil.html
Another blog series, Story Elements, is linked here, along with reviews and more: http://catemasters.blogspot.com/2011/03/dancing-with-devil-dark-paranormal-with.html
Alexis: Very interesting. You also write contemporary romances. How do you decide which type of romance to write next? Do you prefer one over the other?

Cate: Ideas will grab me, and if they’re strong enough, I’ll follow through. I also write historical, women’s fiction, and mainstream stories. For me, it’s less about genre than just telling a great story.

Alexis: I completely understand that.  You are a very busy lady. What can we expect next from you? Do you have any new releases coming or a work in progress?

Cate: The WIP list is neverending! Decadent Publishing will soon release another fun paranormal novella based on mythology, DEATH IS A BITCH. A ghost story, In the Midnight Hour, is now finished, and I took a break from romance with a series of interrelated literary short stories called Wild Life. I’m working on another paranormal novella now and after that will start on the next Goddess Connection story, based on an Egyptian goddess.

Alexis: It sounds like your readers have a lot to look forward to :-) Thank you so much for sharing your magical stories with us. It's a pleasure having you visit.

Cate: Thanks so much for having me, Alexis! I’m always happy to share my stories. :)

Alexis: For a chance to win the first book in The Goddess Connection series, THE MAGIC OF LAVENDER, be sure to leave a comment for Cate. If I have contact information, I will let you know when you win, otherwise, check the side column for your name on Wednesday under WINNERS :-)

For more information on Cate’s romances go to http://catemasters.blogspot.com/
Alexis: Check out this excerpt from DANCING WITH THE DEVIL

Excerpt:
What had he done? By all that was sacred, Bodie knew better than to lie with her. Since the first night he’d spoken to her, he’d had trouble restraining himself. Her every movement, every word, seared into him at his greatest depth, filled him with yearning for something forbidden.

Her lips moving against his unleashed emotions that had stayed dormant for millennia. He was in it, deep. Already he spiraled out of control, and he hadn’t allowed himself to move, not even a finger. Not a slide of his lips, not a slip of his tongue into what must be a warm, tantalizing place. Once he did, that one tiny step would trigger an avalanche of desire, already building with volcano force.

To clear such thoughts from his mind, he turned his head to break away. Never should have closed his eyes; it only intensified the tactile senses. The fluttering of her breath as she followed, her kisses now moving up his neck, her fingers splayed lightly against his cheek as her mouth found the edge of his mouth.

Her knee grazed his thigh as she straddled him. “Are you sure?”

A shudder wracked his body, and he clenched the cushions to keep from reaching for her. “I don’t mean it’s a physical impossibility. And I’d love to, believe me. But it’s not exactly condoned by my superiors.”

He risked a look at her. A mistake. Tawny hair framed her heart-shaped face in tumbling waves. He locked the muscles in his rising arm and forced it down before he could touch her.

A teasing smile lit her face. He hadn’t needed to answer her. She lifted the bottom of her shirt up and over her head, revealing a black lace bra, lush dark peach rosettes pebbled beneath.

Her warm hand closed around his, and drew it upward to press against her breast and hold it there.

Everything in him screamed No! and Yes! at the same time. With an animal sound, his torso rushed up to meet hers. Somehow he stayed his desire. Lips barely brushing hers, he drew back enough that her breath flowed into his mouth as he spoke. “They’ll reassign me, Lily. I’d love to make love to you. I’ve wanted to for longer than you know. But I don’t want one night to have to last an eternity as a memory. We’d have tonight. Then I’d never see you again. Is that what you want? Tell me now. Quickly.”

Sadness tightened her lips. “No.”

As she curled into him, her muffled words soothed the tension threatening to burst through his skin. “I want to be with you, Bodie. Hold me.”

His body quivered, whether from denial or relief, he couldn’t say. He relaxed into her embrace and closed his eyes. “Always.” If only he could keep her here, safe from their reach.

But how safe was she from him?

He couldn’t let his feelings for her compromise the mission.

With a sharp intake of breath, she pulled away. “I’m not like this. I don’t seduce men. I haven’t even…” Hair hid her face when she dipped her chin to her chest.

He tilted his head to catch her attention. “I know.” It won him a tentative glance. “You don’t need to explain, Lily. Ever.” He knew she’d let men touch her, a few with whom she’d been infatuated, maybe even loved. None had taken her virginity.

Yet she’d offered it to him. Tenderness washed over him as she searched his face, wary and confused. Distrustful. How terrible for her, not to believe herself worthy of complete love and devotion. The same worship any goddess deserved. Someday he’d prove to her she was a true goddess.

Alexis: Don't forget, for a chance to win the first book in this series, THE MAGIC OF LAVENDER, leave a comment for Cate :-)