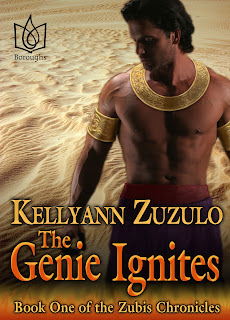 Today we are interviewing Paranormal Romance Writer Kellyann Zuzulo. She is giving away a $20 Amazon Gift Card.

Alexis: Hi Kellyann, thank you for visiting Happily Ever After Thoughts. Can you start by telling us why you decided to write stories about Genies?

Kellyann: Hi Alexis! Thanks for hosting me today. I’ve always been fascinated by the paranormal and how much of it is imagination and how much is based in truth. I’m also a journalist. When I worked for the Saudi embassy as a writer, I learned about belief in the race of jinn. So I started out by asking, “What is this belief based in? Are they real? What would a world with jinn be like?”

Alexis: Talk about a job with great opportunities. It must have been fun learning about the jinn. What is THE GENIE IGNITES about?

Kellyann:
THE GENIE IGNITES is a love story about the genie Zubis and a human woman, Bethany O’Brien. Bethany is an editor living in Washington, DC, when she meets Zubis at an embassy reception. There is an immediate attraction between them and yet she is cautioned by an innate sense of danger. She thinks he is a Saudi minister, but he is a jinni. Born of flame, he was an emissary of the jinn in Solomon’s temple when she was a priestess in that previous lifetime. They were lovers. He has never forgotten her and continues to love her. But she needs to be convinced that their ongoing connection won’t be her destruction. Her search for truth leads across three continents to a world of magic and mystery, of treachery and tears, of seduction and devotion. She’ll find out just how durable love is.

Alexis: I know I'm being redundant, but that sounds so romantic

Kellyann: I rubbed my magic lamp. ; )

Alexis: Really? I think I need one of those. What are your favorite character traits of Bethany and Zubis?

Kellyann: Bethany is inquisitive, honest, passionate and as cynical as any urban 21-st century woman will be. But she’s open to possibility. I like that about her. Zubis is loyal. And that’s one of the most important traits to me. Plus, he has a sexy charisma and is absolutely fearless.

Alexis: Ah, loyalty is my weakness too. You don't only write romances though. Toy write thrillers too. Are these completely different genres for you, or do you see overlap?

Kellyann: Well, with romantic suspense, which I think applies to THE GENIE IGNITES (as well as it being a paranormal), there are a lot of similarities to a thriller. The author not only has to establish a relationship between characters but build of sense of urgency around a particular situation. I think you’ll find that sense in many romances and, of course, in thrillers.

Alexis: That makes sense. So what can we expect next from you? Do you have any new releases coming or a work in progress?

Kellyann: I’ve already submitted book two of the Zubis Chronicles to Boroughs Publishing Group. That book is called THE GENIE SMOLDERS and continues the love story between Zubis and Bethany, amidst a particularly compelling peril (there’s that thriller sense). I’m currently working on another novel about an American archaeologist who uncovers—guess what—a genie in the desert outside of Jordan. He has to return with her to the United States and convince her to free him. And I have a completed thriller about a genetically altered coyote that terrorizes a Long Island community.

Alexis: Wow, you have some great story lines! We can't wait to read these :-) Thank you so much for sharing your stories with us. It's a pleasure having you visit.

Kellyann: Thanks for letting me share my jinn with you. Best wishes to you!

Alexis: For a chance to win a $20 Amazon gift card, be sure to leave a comment for Kellyann. If I have contact information, I will let you know when you win, otherwise, check the side column for your name on Wednesday under WINNERS (under the Blog Hop)

For more information on Kellyann's books, go to http://www.kfzuzulo.com/the_books

Alexis: Check out this excerpt from THE GENIE IGNITES.

Excerpt:
A sucking sound like a jar of sauce being twisted open snapped Bethany to attention. She spun around to face the front of the stall. Wiping at the steam fogging the door, she saw the gray silhouette of someone standing outside the shower. Derek must have come in. He stood still, arms slightly raised from the sides of his body. If this were one of Bethany’s yoga classes, she could say he executed a classic mountain pose.
“Son of a …” Working up to a flurry of curses she grabbed for the stall door. The handle slipped from her grip as he pulled the door open. The chrome trim rattled.
“What the hell do you think you’re doing?” Irritation spat out her words. “If you think …” The mist swirled around his body and against his neck. Despite the dense steam, Bethany felt a chill of recognition and froze.
He was naked, his chest broad and hairless. His eyes, barely visible through the vapor, were golden. Eyes she’d imagined just now when looking at Derek, but not like Derek’s eyes at all. He lifted a foot over the lip of the shower door, his motion pushing her back into the stall. The door snapped shut behind him. Moving with quick grace, he cupped the full weight of one of her breasts. His touch was exhilarating, the movement familiar.
For reasons that seemed idiotic - her body telling her she knew him, had enjoyed the caress of his hands before - she didn’t scream, but flattened her palm on his chest and pushed.
Firm, pliant skin coursed beneath her fingers, feeling real and solid. “Hold on.” She brought her gaze up to his eyes and her heart flipped in her chest.
An urge to run - to push past him and flee out of the room and out of all knowledge of who this man was and why she felt that he had a right to be standing before her, imposing and expectant - flashed and faded.
Anticipation held her immobile. From the moment she had seen Minister Zubis at the embassy, she knew it would come to this. Maybe not a rusty shower stall in Italy, but a face-to-face liaison that may or may not include clothes.

Alexis: Don't forget, for a chance to win a $20 Amazon Gift card, leave a comment for Kellyann!