Alexis: Hi Liz, thank you for visiting Happily Ever After Thoughts. Can you start by telling us why you decided to write erotica?

Liz: Sure! When I was 14, my girlfriend and I found a dirty newspaper in the bushes. She and I returned to her house and giggled over the pictures of naked women. But when she read aloud some of the letters of men's fantasies, more than just my face got hot! She was gracious enough to let me keep the paper. That is, I pulled it out of her trash can when she wasn't looking. When I think back on it, she made such a show of throwing it away, she was probably going to retrieve it from the trash herself after I left! Anyhow, I really wore that newspaper down as I read those letters over and over. I finally tried writing out my own fantasies when I was 16. About a year later, I sent one to Penthouse Forum and it was published! I was so excited, I decided to work hard at improving my writing so I took up creative writing in UCLA.

Alexis: Wow, I guess one man's trash is another one's treasure, especially in your case. So what is AMY "RED" RIDING's HOOD about?

Liz: It’s adult fairy tale erotica meets Romeo and Juliet, where the love between a young woman and a werewolf is forbidden. Amy “Red” Riding is tired of being a virgin. Her best bet is a lycan named Sean. He’s perfect. Crystal blue eyes, dimpled smile, buff chest, and wicked bulge! But being in a community that frowns upon human-lycan relationships makes loving Sean more challenging than she ever imagined. I had one reviewer say how refreshing it was to read about a couple fighting for their love instead of against it. 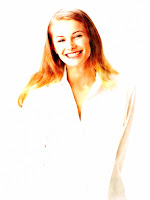 Alexis: That is a great comment from the reviewer. Where did you get the idea for this story?

Liz: I copied every other word from the original story, then inserted sexy words in the missing spots (heh, heh). Actually, the main characters and story line came from the original Red Riding Hood, of course. Then, when faced with characters that weren’t sexy, like the grandmother and the lupus (the wolf), I changed the characters to be more enticing. When it came to the forbidden love between Amy and Sean, I pictured the American attitude for love between a white woman and a black man before the civil rights movement. I asked my family what the common excuses were back then for why blacks had to be treated the way they were treated. I then incorporated those expressions like “everyone has their own place, blacks have their place, whites have theirs” into my fiction.

Alexis: Interesting research. I can see why you liken it to a Romeo and Juliet story. What are your favorite character traits of Amy and Sean?

Liz: I love how Amy is ready to fight the established bigotry against the lycan community. She is able to rise above the common mistreatment of lycans and look into her heart to learn what’s true. I also love her daring nature and challenging questions, like when she asks Sean, “What’s the one secret you don’t want me to know about?” Talk about chutzpah!

As for Sean, I admire how he wants the best for Amy, even if it means respecting her parents’ bigoted views of lycans. Since he’s the wolf in the Red Riding Hood story, I thought it necessary to have him be an alpha male. His final treatment of Amy went further than I have ever gone before in the realm of dominance in a sexual relationship. Whew! It was hot writing that scene! I had so much fun editing the scene, you can bet you’ll be reading well-polished writing!

Alexis: A well written scene is always a pleasure ;-) What is it about fairy tales that draws you to write with them at the center of your work?

Alexis: Very true. What can we expect next from you? Do you have any new releases coming or a work in progress?

Liz: I actually have many new releases coming out soon. I’m very excited about the audio book versions of Amy “Red” Riding’s Hood, and Alice’s Sexual Discovery in a Wonderful Land, and the two of them combined as a special bundled deal. Those should be released by the end of September, 2012. I’ve also just put out the bundled deal as an ebook on Amazon.

Alexis: Wow! You have a lot on your plate which I'm sure makes your readers very happy :-) Thank you so much for sharing your story with us. It's a pleasure having you visit.

Liz: And thank you, Alexis!

Alexis: For a chance to win a a PDF copy of AMY "RED" RIDING's HOOD, be sure to leave a comment for Liz. If I have contact information, I will let you know when you win, otherwise, check the side column for your name on Wednesday under WINNERS.

For more information on Liz and her books, go to http://www.facebook.com/Liz.Adams.Author

Alexis: Check out this excerpt from
AMY "RED" RIDING's HOOD

Amy floated back up to the surface. Her eyes opened. She saw Sean’s head above hers. Where was she? In her bed. In her bedroom.
Sean smiled and said, “That was amazing.”
Amy tried to remember what happened. “Did I fall asleep?”
“You passed out,” Sean said. Dark heavens, his dimples were gorgeous. “I always heard stories of how lycans can make humans pass out with their tongue. I wasn’t sure it was true until now.”
“Come here,” Amy said. She pulled him down into a hug. She loved his weight solid upon her. She really passed out from his oral skills? So the rumors were true. Lycans were great lovers and now she had her own.
“I can’t wait for my parents to meet you,” she said.
Sean snorted, “I’m sure they’ll be overjoyed to know I feasted twixt the thighs of their daughter.”
Amy pushed back to look up into his eyes. “I’m serious.”
He rolled off Amy and stood up from the bed. “Red, you know how much they hate lycans.”
“But once they get to know you....”
Sean charged to her closet to retrieve his coat. “You’re dreaming.”
“They’re not that dimwitted. Why won’t you give them a chance?”
After punching his arms through the sleeves of his coat, Sean buttoned it hastily. “Because I know them well enough to know they won’t give any lycan a chance.” He stormed to the window.
Amy huffed. “Well, if that’s true, why don’t you be the better person and confront them about it? What are you afraid of?”
He stopped at the window and sighed. “I just don’t think it’s a good idea, okay?”
“So, what then? You want us to see each other in hiding for the rest of our lives?”
He looked at her with defeated eyes, opened the window, and started to climb out.
Blazing skies. Amy called out, “Sean.”
He turned to look at her. Amy bit her lip. She said at last, “I’m going to Aunt Carmen’s tomorrow.”
Sean nodded. “Meet me in the woods.” He looked down, as though planning his descent at the exterior of the cottage.
“Sean.”
“What?”
She thought about the woods. Isolated. Romantic. She was ready. “The woods are a great place.” She smirked.
“For what?”
“For our first time?”
Sean fell off the windowsill and Amy heard a crunch of bushes outside. She rushed to the window. Sean lay in the bushes with a huge grin.
She laughed, relieved. “Are you okay?”
“Are you kidding? I don’t think I’ve felt this good in years.” He stood up and brushed himself off. “In fact, it’s too beautiful a night to walk home.” He took off his coat and threw it up to her. She managed to catch it and her eyes popped wide as she watched his nimble fingers unbutton his shirt.
Was he out of his mind? “What are you doing?”
“My clothes don’t fit me when I turn. Promise to keep them folded in a neat pile for me.” Revealing his entire rippling bare chest, Sean threw his shirt up to Amy. She let his coat drop to the floor and caught his shirt at her face, inhaling his sweet scent.
Bundling the shirt in her hands, she said, “Are you craz—”
His trousers caught her in the face. She dropped his clothes on the floor and saw him in just his drawers. Thunder and lightning! She wanted to taste every inch of that muscular chest.
“Promise!” he said.
“Shh!” For sure, he’d wake her parents.
“Promise,” he repeated with a forced whisper.
“Promise what?” Promise that I’ll claw your sculpted back as you plow into me? Sure! I’ll promise that.
“Promise you’ll fold my clothes.”
“Oh. Yeah.” She placed a palm on her breast and felt the pounding of her heart. Lycans were said to have acute hearing. Could he hear her beating heart?
“Good.” He yanked down his drawers.
Thunderballs! Amy covered her eyes. No, that was not a sausage she just saw. He was big!
Thinking about him made her tongue swirl. She bit her lip and peeked through her fingers, just in time to see the drawers being flung at her. She caught them.
“You sure you’re ready?” He asked. “You want tomorrow to be the day?”
Amy laughed nervously. Her eyes darted back and forth between looking inside her room and at Sean. How do you talk to a naked man? Where are you supposed to look? He wanted to know if she were ready to end her virginity tomorrow? Seeing his tall neck, broad shoulders, thick pecs, spectacular abs, and huge…biceps. Thunder and lightning, yes! She was ready to call him back up and hammer that lovely rod of his into her aching core now.
“I’m ready.”
“I’ll see you tomorrow, then,” Sean said in all his naked glory.
He turned – snout bursting from his face, fur frothing from his skin, arms and legs bending to all fours – and pounced away into the inky night.
Amy brought his drawers to her face and drew in his musky scent. It was going to be a long night.
Alexis: Don't forget to comment for your chance to win AMY "RED" RIDING's HOOD.