PASSION’S POISON Released and a Giveaway! 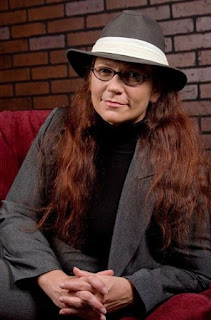 Now, I am sure that I'm not poking fun, but rather honoring them by providing a new story, birthed from their phenomenal work. No, mine will not be studied in the college classroom, maybe the college dorm ;-) but not in the classroom. However, I do hope mine will be enjoyed by many on Kindles, Nooks, and other ereaders, inventions these classic writers never even envisioned. So I’m proud that I can take the focus of great classic literature and create a new story from it, one that ends happily, not sadly like so much of great literature does.

Do you know who else is proud? My mom. Yup, she is.  She tells everyone about me and my books. After Masque came out, another author said that she guessed I had written a book my mom wouldn’t read. When I told my mom that, she said, “You tell her that it was a red, hot love affair that produced you!” Go Mom!

So I hope that those who enjoyed my first venture into the hotness that is erotic romance will enjoy Passion’s Poison as well. It was birthed from Nathaniel Hawthorne’s story “Rappaccini’s Daughter” and has as its heroine a descendent of that original character. Both Hawthorne’s, and my, Beatrice Rappaccini are poisonous. The difference is that mine, in order to stay alive, must release her poisons through sexual intercourse with men, who then become very ill. This makes Bea’s life quite complicated when she falls for Zach Woodman, a former logger turned chainsaw artist. Of course, Bea’s 6 fathers, hippie mother and outspoken grandmother already made her life interesting, but now she has this hot hunk she likes, a cop who wants her, an old high school boyfriend still in love with her, and a person writing anonymous letters telling her to stay away from Zach. But I promise, she does get her happily ever after, it just takes a bit of doing :-}

To celebrate this release, I will be giving away an ecopy of Passion’s Poison to one lucky commenter.  Comment on whatever you wish. I’m always thrilled to hear from readers.

Here’s a little preview of Passion’s Poison. I hope you enjoy :-) 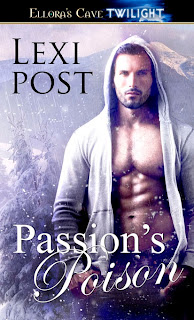 Zach Woodman was too local to be her lover.

Beatrice Rappaccini reminded herself of that fact as she drank in the sight of the shirtless man using a chainsaw in the forest clearing. The stark muscles in his arms and back danced with the movements of the machine as he angled it through a massive log standing on its end. His jeans stretched against straining thigh muscles braced in a slightly bent position, his construction boots encased in mud.

Bea tried to breathe, but the heat infusing her flesh overwhelmed her. What was happening? She had released her body poisons less than two nights ago down in the city, but this desire making her heart beat as fast as a hummingbird’s wings felt different. This couldn’t be good.

She gulped in air, desperate to control her breathing even as her high-heeled boots sank deep into the mud of the forest floor.

Zach moved to the side of the log and carved out a deep groove. Bea watched his pectorals tense under the layer of dirt covering his chest as he held the machine steady.

Mesmerized, she tried to take a deep breath but her lungs constricted, refusing to allow in the cool forest air. Her head spun as darkness encroached on her peripheral vision. Oh damn. She pulled her feet from the muck and sat down hard on a stump nearby. Dropping her head between her knees, she closed her eyes and focused her attention on inhaling.

As oxygen flowed into her lungs, the clearing grew quiet and unease replaced her near panic. She opened her eyes to find two boots standing in front of her. Silently, she wished she could crawl under the granite rock lying between those feet.

Since that wasn’t an option, she lifted her head. Zach’s sweat-streaked six-pack abs came into view above the edge of his blue jeans. Her stomach clenched. It tightened even more as his muscled chest, complete with wood shavings caught among the short, dark hairs, seized her attention. She took another calming breath, ignoring the growing warmth between her legs, thankful she remained seated.

Her gaze reached his angular face, where she found he had taken off his goggles. His green eyes, filled with curiosity, stared at her. His mouth quirked. “Are you okay?”

She shivered as his baritone voice slid through her like an otter through water, leaving ripples of weakness suffusing her body. She swallowed a groan. Mentally, she reached for the hospitality professional she’d trained to be. “Yes, I just need a moment.” The breathy answer was anything but professional.

His scrutiny didn’t leave her face. “Can I get you something? A bottle of water? A beer?”

She nodded, not trusting her voice.

His grin pulled the corners of his dark lips, moving the stubble of his unshaven face to form black arcs around the sides of his mouth. He turned and strode toward the log cabin she’d come upon at the end of the dirt driveway, his confident swagger demanding her attention.

She wrenched her gaze from his tight ass to give her body a chance to cool. She was here on business and her libido had to behave. Her body’s attraction to this man didn’t make sense. She had released her debilitating sexual toxins in a one-night stand on Saturday and had reached orgasm three times. It was only Monday. She should have a whole week of relief. Somehow, she had to gain control of herself.

By the time Zach returned with water and a beer, she hoped she appeared normal. He silently held out both. She accepted the water bottle while he opened the Bud Light and took a couple gulps. She stared as his Adam’s apple bobbed along the corded muscles of his neck. Desperate to dampen the heat in her body, she raised her drink and sipped.

He gestured toward her with the half-empty beer. “Feeling better?”

She swallowed the cool water and cleared her throat. “Yes, thank you. I’m not sure what happened. I probably should’ve had breakfast this morning.”

He looked at the sky before returning his attention to her. “Breakfast? It has to be about lunchtime.”

She tried a slight smile but feared it came across more as a grimace, so she offered her hand. “I’m Beatrice Rappaccini from the Lakeside Inn in Meriden.”

He grasped her hand in a strong grip, causing fire to shoot through her arm, across her body and straight to the juncture of her thighs. She almost squeaked in surprise.

“I’m Zach Woodman, but I imagine you already figured that out. What can I do for you, Ms. Rappaccini?”

Oh, the possibilities were endless. She looked at the zipper of his jeans and wished it open. He could strip and push his hard cock into her hungry body and make her come until she screamed. She’d never screamed before, but she had a feeling she could with him.

She started and pulled her gaze from his crotch. Had she seen a bulge growing there or was it her imagination? What was happening to her? “Please, call me Bea.” Oh that sounded way too husky. She really needed to get a hold of herself.

She stood, wavering a bit in her heels. He grasped her arm and steadied her, getting wood shavings on the sleeve of her green dress, but she didn’t think he noticed. Did he notice anything about her, such as the fact her body reacted to him like wildfire to wind? With the constant smirk on his face, it was hard to know.

She tried to find a semblance of composure as she removed her arm from his grip. “I’m here to commission a carving for one of the Larsens’ inns, specifically, the Lakeside. The Larsens would like something unique.”

He took another swig of beer, but his gaze never left her. “Hmm, something unique, as in abstract, or just different from my other carvings?”

Bea shook her head. “Definitely not abstract. The Larsens prefer rustic to fit in with the environment. I wandered through your shop,” she pointed back toward the log cabin with the sign “Zach’s” burned into it, “but nothing there is quite right.”

He wiped his forehead with the beer bottle as he contemplated, staring at her with his brows drawn together in concentration.

Did he think about the carving or her? She blushed. Since when couldn’t she read a man? Her very survival depended on her ability to find men who were attracted to her. So why was he different? And why was she so affected?

He drained his beer and smirked. “I think this will take some time and I need to wash up. Would you mind staying for lunch while we work on it? You could use some food and I need a break.”

She shrugged. “Sure, I’d be happy to.” She’d be happy to do whatever he wished, take off her clothes, sit on that log, let him—ugh. She had to stop this.

He turned away from her. “Great. This way.”