Hey there, how ya’all been?  Good, I hope!  I’m doing better now…now that Murphy has been evicted from our couch!  Okay, I know none of you have any idea what I’m babbling on about, so let me back up and fill you in on what’s happened.  I’m currently on an extended road trip from Arizona to Pennsylvania, and back again by way of the scenic route.  In short, I think we are going to hit about 25 states by the time we are done.  All right, maybe not quite that many…but close!

Anyway, this trip has been a real learning experience for me and the toughest part was learning to drive a 30’ motor home.  Driving 5000 miles isn’t a problem.  Staying away from home for 3 weeks isn’t a problem.  Traveling with a woman I’ve met only once before isn’t a problem.  But getting this stinking house on wheels down the road seems to be a life-altering challenge.  I kept thinking if others could do it, I can.  But I might have been wrong.  LOL

Okay, here’s the deal.  Within the first week on the road, I’d broken 2 pairs of reading glasses and a pair of flip flops.  Then I broke the motor home.  Okay, I’m getting ahead of myself here.  Remember Stupid Girl—my alter-ego that does all the stupid crap…or at least takes the wrap for it?  Well, she’s along on the trip too.  I tried to make her stay at home, but the bitch jumped in the RV and refused to get out…so I had no choice but to take her along.  Who knew she was going to insist on driving?!  And who knew she'd invited Murphy to tag along too.

Well, the second or third night out, we pulled into a gas station in Oklahoma (with Stupid Girl behind the wheel).  We had been either behind or ahead of the tornadoes the entire way through Texas and Oklahoma, so she was a little on edge and still trying to get the hang of missing curbs.  Well, there was this stupid ‘ol curb at the gas station…one of those things that sticks way out in everybody’s way for no logical reason at all and serving no purpose?  Yeah…you got it…Stupid Girl hit the damn thing and the RV momentarily became airborne.  Woo Hoo!  Who knew she’d need a pilot’s license to drive the damn thing?!  We all got out and walked around the RV and looked it over and all was well…only a little curb, nothing damaged, we’re good.  We get gas and we head on down the road.  It was a huge relief to finally get to the RV park without having the RV picked up and blown into Kansas like a flying cow.  So we parked and got out, hooked up the utilities, and then noticed one of the 4 tires on the back was flat as a pancake.  Crap!  Stupid Girl!  So we call the RV rental place and they dispatch a fix-it guy to the RV park.  I’m imagining a long night going from place to place trying to get the tire fixed.  But we lucked out.  We got a smart guy who realized the absence of a hubcap on that wheel meant the valve extender thingies were hanging outside the rim.  So when Stupid Girl hit the curb, she took a little chip out of the rubber valve and all the stinking air leaked out.  Voile…flat!  So our clever fix-it guy just pulled the valve extender off, put air in the tire, and we were good as new.  Yeah for smart fix-it guys! 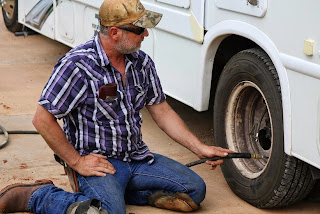 Now, you might think that was the extent of Stupid Girl’s idiocy…but you would be dead wrong.  She got us to Pennsylvania right on schedule and we picked up our third passenger and set about visiting family.  Now, anyone who has ever driven in Pennsylvania knows the roads this time of year are either crap or under construction.  They are rutted and torn up everywhere.  It’s a mess!  So here comes Stupid Girl still learning to drive a 30’ RV into a town with teeny tiny narrow streets that go up hills and down hills and the straight roads only have 6 curves per half mile.  Holy hell…we need Batman to drive these roads and all we’ve got is Stupid Girl.

So…first couple of days she does good.  She makes every turn, doesn’t hit anything going forward or backward, and life is good.  Then we head to the park for a picnic and this is where Stupid Girl really earns her reputation.  We make it down the incline on a very rutted dirt road into the park just fine.  No problem.  Then it’s time to go home.  Uh-Oh!  Going down the incline wasn’t a problem…crawl and take the bumps very slow.  Going up is a different story because you have to go at least fast enough to maintain upward motion.  So she is doing good until we come to the big hole where the entire RV seems to be swallowed up and spit out like we’d fallen into the belly of a whale.  The motion causes all of the upper cupboard doors in the RV to fly open and the little gremlins that were hiding in the cupboards started throwing everything across the RV.  This is where the flying vodka comes in.  Now…just to be clear…no one had had a drop to drink.  This was a totally teetotaler picnic.  The vodka was just inappropriately stored in an upper cupboard and the little gremlin living in that cupboard had a terrific arm.  Because he hurled the damn vodka bottle across the interior of the RV.  Stupid Girl heard the pans hit the floor and the horrific thud of the vodka bottle.  So she stopped dead on the incline which now looked like Mount Everest!

Everyone else in the RV scrambled to make sure no one had been hit and to retrieve all of the projectiles from the floor and stow them safely in the lower cupboards.  When everything was once again stowed, Stupid Girl was still shaking from the commotion that had scared her half out of her wits.  So when she started to again pull out of the park and onto the teeny tiny little street made for mice pulling garden carts, she didn’t see the curb on the passenger side.  In her defense, she was sitting with the front end pointed in the air and she was shook up from the near-miss with the flying Smirnoff.  So imagine her surprise when she hears the bottom of the RV scrape the curb!  Maybe it only scraped the bottom, huh?  Noooo.  Then someone says, “I think you caught a post.”  Noooo!!!  Okay, let’s stop right where we are and let’s get out and see what happened.

It is not pretty.  We get out and look and there we are…we are off the curb and there are no steps to get into the RV.  Huh?  That’s not right.  What’s all that metal crap hanging down under the RV?  Oh crap…those are the steps?  Maybe we can just straighten them out, but first we gotta get out of the road.  So Stupid Girl jumps back in the RV and pulls it straight across the highway onto a side street where we can better assess the damages.  Then we get out again and this time we notice the odor.  Definitely not good!  Sewage is now spilling from the bottom of the RV onto the street.  I think I actually recognized last night’s dinner as it floated past us on the street.  We stared, dumbfounded, as our black water tank emptied itself on the streets of Wrightsville, Pennsylvania.  Residents of Wrightsville…we are soooo sorry!

Now what?  Let’s open the door and see how badly damaged the steps are.   No…let’s not!  We open the door and there is a 2’x2’ hole in the floor.  Where there used to be steps inside the entry door, there is now a drop to the pavement.  That’s not good.  Oh, and under the steps…that’s where the 2 house batteries are stored.  We are screwed!  We have a 2 foot hole where our steps used to be, the batteries are wedged in sideways about 6 inches off the pavement, sewage is pouring out of our black water tank, and the broken pipe is hanging about 3 inches off the ground.  Holy Crap!

But, Thank God, we are not without resources.  We have a wonderful friend named Debbie who manages to come up with a pair of pliers and some wire.  She fearlessly crawls under the RV and manages to wire the pipe up so we have a good 6 inches of clearance now.  Yeah, what a woman!  We have called every RV repair shop in the county and no one is willing to come out and look at it.  Did I mention this all happened at 4pm on a Friday afternoon?  Well, of course it did…because Stupid Girl was driving!!! 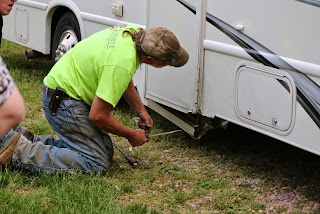 Long story short, we limp back to our camp in the next town over where my friend’s 3 wonderful, amazing, resourceful brothers all show up with blow torches and hazmat suits…okay, maybe a slight exaggeration.  But they did show up with tools and know-how and they took the steps out, found the backup shutoff valve for the black water tank, put a temporary patch over the 2 foot hole in the floor of the RV, and straightened the door out enough that we could open it in case of a real emergency.  Then the next morning we make more phone calls and find a wonderful repair guy in Dover, PA who comes up with an ingenious temporary way to put another fitting on the black water tank so we can use the toilet and dump it at the parks.  Yeah again for smart fix-it guys and good family!!! 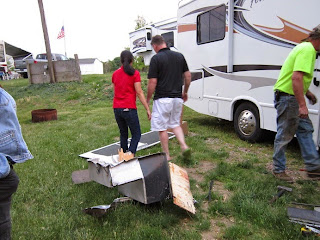 (those were our steps) 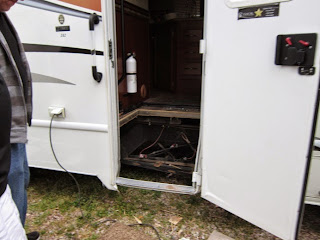 (that's where the steps used to be)

So how, you ask, are we doing now?  Well, we can’t use the door so we have to enter/exit the RV through the cab by climbing over the seats.  But we can use the toilet.  Yeah!!!  We have to crawl under the RV to dump it and often have to get creative on where/how to park so the drain tube will reach, but we’re getting pretty good at that.  Stupid Girl seems to have finally figured out how to miss the curbs, so life’s been pretty good for a few days.  Now we just have to deal with the rental place when we return the unit.  Of course, we have been good doobies and kept them appraised of the events and progress, but I’m certain they are sitting there holding their breath and expecting Stupid Girl to return their RV as a convertible.  It could happen, ya know.  We have 3 more days to go, so cross your fingers that Stupid Girl is done being…well, STUPID.

(Thanks to Peg for the pictures...check out some of her pics and quotes on Facebook at "Humans I Meet".)
Posted by Kayce Lassiter at 3:00 AM