Serial murders in Atlanta are something new, but the fact that the victims are prostitutes and low in social ranking typically are not high on the police radar.


This changes idea with Officer Angie Polaski.  Angie is a beautiful and tough cop and considers the atrocities done on the victims inexcusable.


Another officer, Mike Ormewood, doesn’t see the problem as one needing high priority.  He has other problems of his own.


The Georgia Bureau of Investigation sends their man, Agent Will Trent.  Trent has a steady and hidden personality, a tough nut for Angie to crack. 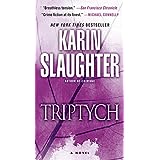 In walks the next most important person, Jon Shelley, in the solving of the murders.  Actually, he walks out of the state prison after paying his dues for a murder.


Jon develops a crush on Angie, Mike hates Jon, Trent has a conflict with Mike’s personality, and Angie’s curiosity about Trent leads to a deep interest.


What a dilemma.  It’s nearly as much a mystery to solve the murders as it is who will end up dating who.


I loved this story.  It had a unique development of the plot and the characters mixed in turbulence similar to a blender.  The only thing I didn’t like was the title of the story.  Triptych?  I looked up the title and found it to define an artistic picture split into three frames.  I seriously did not want to think hard and figure the meaning and how it related to the story other than a character having a triptych on their wall, which ultimately was mentioned once and had little to do with the novel.  Choosing this story had only to do with the fact that the author has always given me a great read!