Woo Hoo!!!  I am celebrating my butt off at this end because I have a new story coming out in Volume 2 of the Butterscotch Martini Shots series.  This box set is titled, BodyGuard, and contains four stories from four of the BMGs.  Can you say “Yeah?!”

The anchor story in this box set is a previously published, and wildly popular, story from the amazing Jennifer Ashley—titled BodyGuard.  I know…awesome how that worked out, right?  LOL
So here’s the new cover… 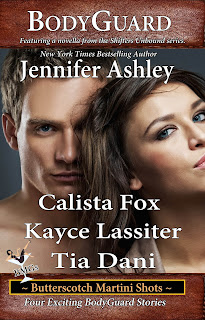 …created by yours truly.  Uh-huh!  Hope you love it as much as I do.

The four authors in this set are Jennifer Ashley, Calista Fox, Tia Dani, and me, and I am ecstatic to be running in such incredible company—what talent!

The story officially releases on September 20th, but it is...

The pre-order link is finally live, so go order your copy now—and it will ship on September 20th.  And while you are there, you will want to order a copy of Volume 1 – Roses and Rodeo, if you haven’t already got a copy.


Oh, and I almost forgot...You are invited to our Book Release Party on Saturday.  You can search Facebook for Butterscotch Martini Girls LET'S PARTY Spectacular!  Or you can try this link...who knows, it might work.  LOL  And if all else fails, send me a note and I'll send you an invitation.  Have I mentioned it's been a very strange day full of strange glitches?

Below are some quick story blurbs on the four stories included in this set, followed by an excerpt from my story, Witch’s Pass.  For those of you who have read my Delta Jane Series, you will find this series to be very similar, in that it is light and humorous.  But this time we have fun witches instead of a fun fairy godmother.  Witch’s Pass is a novella-length story that introduces some of the quirky characters you will learn more about in the full-length novels scheduled to begin coming out in 2017.

Jennifer Ashley
BodyGuard (Shifters Unbound Series)
Elizabeth Chapman is saved from an armed robber by a giant Kodiak bear who shifts
into a large, well-muscled, and fully naked human male. Ronan, the Bear Shifter, takes
her to Shiftertown for safety, where Elizabeth learns that the mateless Ronan, alone in
the world, takes care of Shifters who have also been left on their own. Now, Ronan will
only let Elizabeth leave the confines of Shiftertown if he becomes her 24/7 bodyguard.

Calista Fox
Rise of the Damned (Forever Mine Series)
For centuries, Kage Deville has sworn to protect the mortal soul of Taelyn Abrams—even
though it means watching her die. He’s a demon fighting to keep two worlds from clashing
and she’s a human slayer summoned to life when the threat to the mortals becomes too
great. But something has gone wrong with the resurrection and unless Taelyn's memory
of her true mission returns, a world will be doomed and she will be forever lost to Kage…

Kayce Lassiter
Witch‘s Pass (SpellMaker Series)
Witch princess, Quayk SpellMaker, is in a battle of wills with her father over an
“arranged” marriage to a man she hates. Does she settle for a loveless marriage? Or
risk being without a mate and alone forever?  Gargoyle shifter, Alex McCall, is assigned
to guard Quayk and make sure she marries. But the more time he spends ensuring
Quayk marries another, the more he is drawn to the beautiful, quirky witch.

Tia Dani
Next To Die
Amanda Jackson relocates to Arizona with her new husband. Despite warnings
from a girlfriend, she can’t believe an obsessed psychopath is after her. Until she
sees her name and the words…next to die. To appease his sister, bodyguard Rick
DeLuca reluctantly agrees to keep an eye on Amanda. The dangerous mess he
uncovers reveals an ugly truth. Her perfect husband isn’t who he pretends to be.


“Yes, you idiot.  Get moving or put me down before you kill both of us.”  She bucked again, but he held tight.
Posted by Kayce Lassiter at 3:00 AM