The Unknowns of Eastern Europe…

I recently returned with jet lag from a tour of Eastern Europe, Germany, Czech Republic, Slovakia (home of the handsome professional cyclist, Peter Sagan), Hungary, and Austria.  It was a fantastic trip, all the history, sites, food, and culture.  We all know that’s what can be enjoyable in a foreign tour.


The fields in the northern countries are covered with corn, sunflowers, and solar panels.

The toilet paper is like a strip of Bounty…not soft.


Prague and other cities have a scooper person following the horse carriages.


Wine is served with all meals!


Hot men own wineries.  Their favorite wine is red.

Eating and drinking on a river boat in Budapest (pronounced Budapesht) after the sun retreats is phenomenal.  Buda is on one side of the Danube River and Pest on the other.

Dogs can go into restaurants and water closets.


Coffee is served per half-cup.  Plenty of room for cream and sugar (I don’t use those).


Brie cheese was included with every morning breakfast.  I acquired a taste for cheese with breakfast.


There are armed guards in front of palaces and around the Hungarian jeweled crown, which had been guarded in the US for many years.

Vienna is paradise.  Time to pour a glass of wine.


You can walk the streets at night and feel safe in all of our locations…yet watch out for pick pockets.  My husband and I outsmarted the group of three studying us.  Yeah!


The Hapsburgs ruled all of Bavaria (all these countries and more) for 640 years.  The summer cottage is smaller than the winter palace.  They’re both palaces and I find that funny…the summer palace has about 1400 rooms.


A Viennese symphony concert in the king’s palace is outstanding.


By the way, does anyone read or write about the Hapsburg reign?  I bought a book and it remains somewhere in Eastern Europe.   Along with the bookmark. 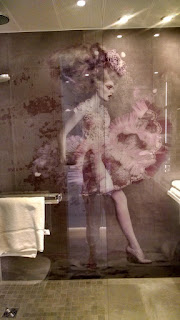 The shower in the Vienna hotel, the Renaissance, had a Renaissance print on the whole wall of the shower.  If I ever remodel my shower, I know what it will look like!


Austrian Alps are magnificent.  The lower mountains have not had snow on the caps for the last twelve years during summer.  First time in recorded history.

The Kleinstanhaus, Eagle’s Nest as named by American soldiers, is on top of a mountain and former home of Hitler.  An amazing piece of architecture and history.


I must say that the funny and fantastic local guide for Austria, Natasha, told us that the “N” word (Nazi) must never be used and never raise the arm in “Heil Hitler.”  You will be pummeled.


Hell, let’s have some more wine!


I think long distance flying sucks.  I’m not afraid and I don’t get sick.  It’s really hard to sit in one place for so long.  Alcohol affects me greatly, but I still can never sleep.  Each end of the trip resulted in being wide awake for 22-24 hours.  Bring a book or three.

I must leave this on a good note.  I love men with a European accent.  It makes them all sexy.  I think that’s part of the requirements for the waiters.  I have a picture of one.  Actually, I have 664 other pictures, but I won’t bore you as I did my mother.

This trip has given me a "total feel" of writing books located in these countries.  I can't wait to get to them!


I’m sure I left a lot out, but I hope you enjoyed my virtual tour!