Hey gang, how ya’all doin’?  Hope you are all fine as frog hair split three ways!!!  So, this week, I’m back on my favorite topic…Stupidity.  There just ain’t nuthin’ that gets me spun up like an overdose of stupid on the hoof.

While researching “stupidity” on the internet, I ran across a fabulous saying that fits this week’s story PERFECTLY!  It was a meme with my favorite actor—Sam Elliot—depicted with the saying, “When you’re dead, you don’t know that you’re dead.  All of the pain is felt by others.  The same thing happens when you are stupid.”

So, here’s my stupid story for the month…it happened one day last week at the bank.  I was rushing to make a hair appointment, and it was an absolute emergency.  Between vacation and a sinus infection, I was a week-and-a-half overdue to have the gray washed away—EMERGENCY of major proportions!  I had rescheduled this appointment twice, and couldn’t risk pissing off my hairdresser by being late.

Think about it…he’s got the color of my hair in his hands.  Piss him off and I could walk out of there looking like this! 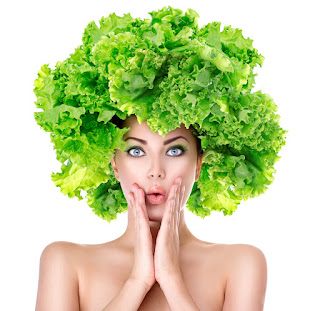 So, I’m on my way, with about ten minutes to spare—most excellent.  Then I realize I don’t have any money to pay him with and he prefers not to take credit cards.  Uh-Oh.  Okay, nothing I can’t handle…there’s a bank one-half mile from the salon.  No problem…I got this.

I drive to the bank and pull into the drive-thru teller line.  Yeah…only one car in front of me.  Everything is going great—so far.  J  I wait for a minute or two for the guy in front of me to finish his transaction.  That’s when I notice something isn’t right.  He’s punching buttons way too fast…no one can read numbers that quickly.  I begin to focus on what he’s doing.  Good, he’s done—his card comes out, and I’m putting my truck in gear to pull forward as soon as he moves.

He stares at his card for a moment, then inserts it again.

We’ve all been there, right?  The person who enters wrong information, forgets to do everything in one transaction, or the bank that lets you see your balance, but you have to log in all over again if you want to withdraw any money—then there’s the guy who doesn’t know what his balance is, so he guesses at how much money he can get from the machine…several times.  Yeah, that’s the guy I’m behind.

I’m getting steamed as I watch the seconds tick by.  I have 7 minutes to get to the hairdresser or I walk out looking like a head of lettuce, and this guy puts his card in a second time, hits all the buttons with the speed of a chipmunk on amphetamines.  He stares at the machine for a moment, raps it on the side, hits more buttons, and out comes his card again. 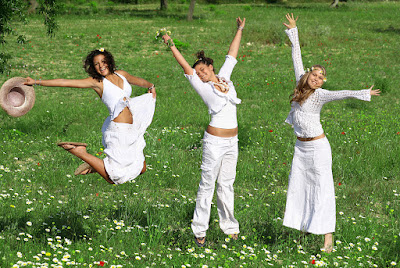 I really don’t care that he hasn’t gotten his money.  I just want him gone.  I put my truck in drive again and inch forward, as does the car behind me.

The guy at the machine licks his card and wipes it on his sleeve, inserts it back into the machine a third time, and starts punching numbers like a maniac.

ARE YOU FREAKING KIDDING ME?

What the hell is this idiot doing?  Is he making that many mistakes?  Is he looking for twice the money he has in his account?  How does it take three tries to get money out of the teller machine?  Ask the damn machine for your balance, idjit!  And who licks his freaking card?

He stares at the machine, again hits it on the side, and again punches numbers like Mayweather in a boxing ring.

I am steaming as I watch the seconds continue to tick by.  I now have four minutes to rescue my hair.

His card exits the machine one more time.

Again, I put my truck in drive and inch forward, as the idjit inserts his card a fourth time.  I shriek, “You have no money, a-hole, give it up!”  Fortunately, my window is up, or it mighta got real ugly.  He might have been stupid, but he wasn’t small.  LOL  I think I heard the guy in the car behind me yell something, too.  J

Time to give up and leave.  I scan my rearview mirrors.  No way.  I’ve inched within three feet of the idjit at the machine, and the guy behind me is so close that I can’t see his car over the tailgate of my truck…but when I lean to the right, I can see his back bumper in my side view mirror.  He’s there, and I ain’t going nowhere.

This is when I begin exercising my entire vocabulary of cuss words, calling the guy in front of me everything but smart.

The guy performs the same routine—insert card, hit buttons furiously, stare at the machine, hit it on the side, eject your card.

This time, I’m taking action.  I’m rolling down my window to tell him to get the hell out of line.  I now have two minutes to get to the hairdresser, and I am definitely feeling the pain of this guy’s stupid. 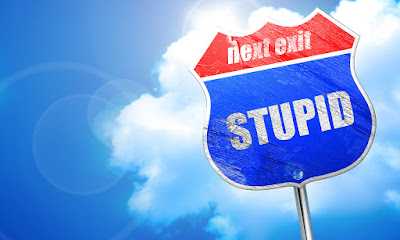 The guy must have, at long last, exhausted his entire supply of stupid because he finally, blessedly, put his card away and drove off—before I could scream obscenities at him or go to jail for maiming him for life.

I pull up to the machine and squint.  It looks broke.  The screen isn’t black, it’s blue.  So, yes, I exercise my right to be stupid, too.  I insert my card and the screen doesn’t change.  No words, no pretty banking pictures, no on-screen keyboard—just solid blue screen.  Okay, I have stupid moments, but I’m not a complete idjit.  I’m happy to say I drove off after only inserting my card one time.

But I had to wonder…how tough is life for someone who inserts his card into a machine that is clearly broken and displaying the blue screen of death?  Not once, not twice, not three times, but four!!!!  Then it occurred to me that he was there when I arrived.  Is it possible I’d missed the first two times?  Or twenty?  That’s absolutely terrifying.

John Wayne has been credited with saying, “Life is tough.  It’s tougher if you’re stupid.”  I was actually feeling very sorry for the guy at the bank by the time I arrived at my hairdresser seven minutes late, but with money in my hand.  And, no, I did not leave looking like a head of lettuce—because I have a very understanding hairdresser…and did I mention I had money in my hand?  J 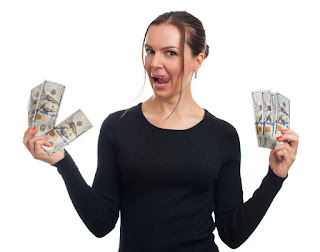 
Kayce
Posted by Kayce Lassiter at 3:00 AM