BELLA and the BEAST by Izzy Szyn and a Giveaway!

Giveaway- Izzy will be giving away an ebook of Wendi and Tink, the first book in the Scandalous Fairy Tales series, to one lucky person on each stop during the tour. All you have to do for your chance to win is leave a comment for Izzy to let her know what Fairy Tale you would like to see re-told Izzy Szyn Style. To increase your chances of winning be sure to visit the other tour stops. You may find those locations here.
BLURB: 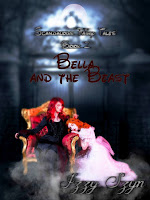 You only thought you knew the story of Beauty and the Beast.When Bella's father runs into the woman known as the Beast, she agrees to take his place as a prisoner for the next six months. Plenty of time to get out of her pending marriage to the son of the village's wealthiest family.When Bella is sent a list of demands and rules, one rule stood out: DON'T FALL IN LOVE.That seemed simple enough, for who could fall in love with a Beast?
Amazon Buy Link
~*~*~*~*~*~*~ Excerpt:
“You mean she’s real?” gasped Bella . Bella had heard tales of a woman that people in her village called The Beast. Anna Baste lived in a big house just outside of the village. She’d not been seen since the curse that disfigured her with scars. People said she was evil , sadistic, seducing young women, who claim they were tortured. “Yes,” confirmed Maurice. “Very.” Bella, being very curious about the rumors researched what she’d heard. She watched videos of women with other women . Instead of finding it sick and perverted, Bella thought it was erotic, finding herself wishing she could be seduced like that. Recently her friend from school Wendi, became involved in a dominant relationship with her boss, Miss Belle. Wendi told her of the things that she was made to do with Miss Belle. Things that made Bella envious , things that she knew her friend well enough to know that Wendi loved every minute of being with Miss Belle. “Is she going to help you?” asked Bella. “Yes, for a price,” Maurice answered. “How much money is she asking for?”“It isn’t money she wants,” sighed Maurice. “She wants you.”
~*~*~*~*~*~*~ About the Author:

New York Times Bestselling Author Izzy Szyn was born in May of 2014 when a friend dared her to write. Born and raised in Detroit, Mi. Izzy now lives in Oklahoma City with her furchild Misty, the friendliest Chihuahua/Terrier you will ever meet. Currently works in a call center, where she writes in between phone calls. Izzy loves to keep in touch with her readers. Email her at izzyszyn@gmail.com.