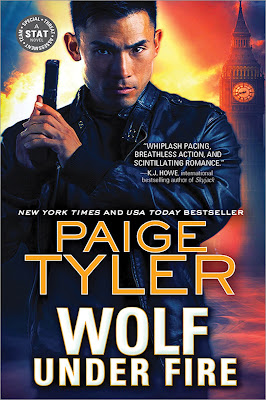 Wolf Under Fire
by
Paige Tyler

For the cases no one else can solve, they send in the Special Threat Assessment Team

Supernatural creatures are no longer keeping their existence secret from humans, causing panic around the globe. To investigate, monitor, and―when necessary―take down dangerous supernatural offenders, an international task force was established: The Special Threat Assessment Team.

STAT agent Jestina Ridley is in London with her team investigating a suspicious kidnapping. Over her radio, Jes hears her teammates being savagely attacked. She runs to help, but she's too late. The only survivor, Jes calls for backup and gets former Navy SEAL and alpha werewolf Jake Huang and his new pack. Convinced that the creature who butchered her teammates was a werewolf, Jes doesn't trust them. But if they're going to uncover the facts and make it back home alive, she'll need Jake's help. And with everything on the line, Jes will have to accept Jake for who he is, or lose the partner she never expected to find...

Jes sprinted down the hall without giving it a second thought. Grabbing the last man through the door by the collar of his jacket, she yanked him backward, flipping him over her hip and slamming him to the floor before he knew what was happening.
Balling her hand into a fist, she punched him in the throat hard enough to stun him, then ripped his pistol out of his grasp while he was gasping for air. Refusing to think about the brutality of the situation, she placed the barrel of the large-caliber automatic against the man’s chest and squeezed the trigger. In this position, the recoil of the big weapon was ferocious, but she ignored it—and the resulting blood—focusing instead on snagging the extra magazine from the man’s underarm holster.

Paige Tyler is a New York Times and USA Today Bestselling Author of sexy, romantic suspense and paranormal romance. She and her very own military hero (also known as her husband) live on the beautiful Florida coast with their adorable fur baby (also known as their dog). Paige graduated with a degree in education, but decided to pursue her passion and write books about hunky alpha males and the kick-butt heroines who fall in love with them.

She is represented by Courtney Miller-Callihan.