New Release ~ SCOUNDREL OF MY HEART by Lorraine Heath 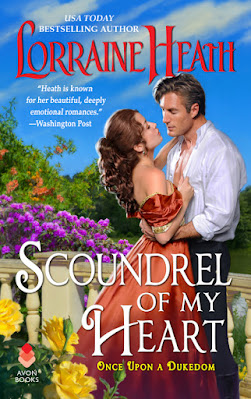 Scoundrel of My Heart

Once Upon a Dukedom Book 1

Lorraine Heath begins an exciting new series with a breathtaking romance about a young woman who must marry a titled gentleman to obtain her inheritance and the unsuitable man she begins to fall madly in love with.

She is desperate to wed a duke…

Lady Kathryn Lambert must marry a titled gentleman to claim her inheritance and has finally gained the attention of a duke. Yet she is unable to forget the scandalous second son who aided in her achievement—or his betrayal.

He wants what he can never possess…

Lord Griffith Stanwick is tormented by the bitter truth that as a “spare,” he will never be able to give Kathryn what she yearns to possess. But when his father is found guilty of treason, Griff detours into the dark and dangerous corners of London, haunted by memories of the woman lost to him forever.

Love not to be denied…

As the duke’s courtship intensifies, Kathryn discovers Griff has become a man to be reckoned with. When old passions flare and new desires ignite, she must decide if sacrificing her legacy is worth a lifetime shared with the scoundrel of her heart.

- Excerpt: Scoundrel of My Heart -

Sitting in the front parlor, the escritoire on her lap, almost forgotten, Kathryn cursed Lord Griffith Stanwick for the hundredth time. His words had put salacious thoughts in her head that she could not seem to be rid of. Hands gliding over her bared shoulders and lower, to places they ought not. Blast him!

Then, to insinuate that she’d been lying when she’d claimed not to have ever had improper musings—the cur. Of course, she had, but it had been bad form on his part to insist she confess it. A lady of genteel breeding should not harbor lurid reflections and most certainly should not admit to it, especially when they often involved her dearest friend’s obnoxious brother doing terribly wicked things to her, running a finger over her décolletage where silk met flesh or kissing the inside of her wrist where she always put a dab of perfume just in case. She cursed him again.

To make matters worse, he’d used that awful moniker he’d bestowed upon her when she’d met him at the age of twelve, Freckles. Ghastly name, that. The brown spots had always been the bane of her existence. Wearing bonnets that she loathed and rubbing all sorts of magical creams on her face had caused the spots to fade, but the barest of shadows remained, which gave her a rather blotchy appearance when she blushed. Which for some reason Lord Griffith Stanwick caused to happen with regular frequency whenever he was near.

Since she was presently staying with her dearest friend, Lady Althea, crossing paths with Griff—as his sister called him and Kathryn secretly did as well—had become a regular part of her day . . . and sometimes her night.

She fought not to give in to guilt because she was the one responsible for his having awakened near the hedgerows. Having difficulty sleeping the evening before, she’d been on her way to the library to fetch a book and had just reached the foyer, when she spotted the front door opening. Then he had stumbled in, only a fraction, enough to press himself against the jamb without releasing his hold on the latch. His disheveled state had been appalling. His neckcloth was unknotted and his hat missing. His hair stood at odd angles as though a dozen women had run their fingers through it, which they no doubt had. When his gaze landed on her, one corner of his mouth had hitched up. “Hello, Freckles.”

She’d hated seeing him in such disarray, behaving like her Uncle George—her father’s brother. The man drank too much, played rather than worked, and constantly came to her father because he was in need of funds to support his gambling habits. He argued that he was owed because her father had inherited the titles and estates while he’d been left with nothing. Although, eventually he would inherit because her father had no son with whom to leave everything. It hadn’t helped her opinion regarding Uncle George when his own mother was so disappointed in him. “Never marry a second son,” her grandmother had advised her numerous times when he’d shown up at a family function three sheets to the wind. He cared about only himself, no one else. Not his wife or his own son, who had taken after him in every regard, even going so far as to hold out his hand to her father. “It’ll all be mine eventually. Might as well give me a bit now.”

And it seemed Lord Griffith Stanwick was cut of the same cloth. She shouldn’t care, but she did, damn him. Although for the life of her, she couldn’t figure out why. But she just wanted him to be better than he was. Therefore, last night\ when the opportunity had presented itself, she’d decided to bring him some misery and had hurried over to him.

“I hear your father coming. He mustn’t see you in this state. Go round to the back. I’ll let you in there.” His father hadn’t been coming. The duke wasn’t even at home. He spent more nights away from the residence than he spent in it. It was a well-known secret that he had a mistress and preferred her company to that of his duchess.

But Griff, in his inebriated state, hadn’t the presence of mind to question her lie, had steadfastly believed her, and had made haste to exit through the door he’d just entered. She’d pocketed his key from where he’d left it in the keyhole, shut the door, and locked it. After scurrying to the servants’ entrance, she made certain that door was locked as well. In delight, she had stood there listening as the daft lord knocked and knocked and knocked.

Then he’d called for her. “Freckles! Come on, Freckles, open the door. Be a good girl.” Only she hadn’t wanted to be a good girl. Had wanted him to stop calling her that ridiculous name, had wanted him to be different from the two men who were causing such heartache for her family.

Finally, all had gone quiet. After she’d gathered enough courage to open the door and peer out, the lord was nowhere to be seen. A momentary panic struck her until she heard him singing some ditty about a woman with bowlegs. She’d watched his silhouette weaving through the garden until he finally disappeared behind the hedgerows. All had gone silent for a couple of minutes before she’d heard the snores and decided he deserved the uncomfortable bed. Although now, she felt badly about it because she had determined that afternoon to ask a favor of him. But finding any time alone with him in order to broach the subject of her request had proven impossible, which was part of the reason Kathryn had sought solitude in the front parlor while Althea and her mother had adjourned to the duchess’s favorite drawing room for a bit of tea following dinner.

Kathryn had eaten numerous times with the family, but only tonight had she noticed that the duke, sitting at the head of the table, only addressed his elder son, Marcus, who sat to his right. Never the younger who sat to his left.

From Scoundrel of my Heart by Lorraine Heath, published by Avon Books. Copyright © 2021 by Jan Nowasky. Reprinted courtesy of HarperCollinsPublishers. 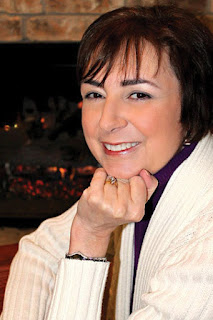 Lorraine Heath always dreamed of being a writer. After graduating from the University of Texas, she wrote training manuals, press releases, articles, and computer code, but something was always missing. When she read a romance novel, she not only became hooked on the genre, but quickly realized what her writing lacked: rebels, scoundrels, and rogues. She’s been writing about them ever since. Her novels have been recognized with numerous industry awards and appeared on the USA Today and New York Times bestseller lists.