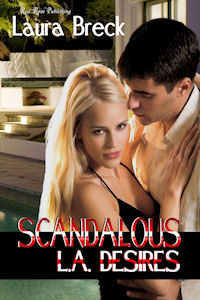 What kind of book do you like? Sweet? Sexy? Mysterious? Glamorous? Or do you like a combination?
I will be giving away one e-copy of Secret Vegas Lives (Book 1 of the series) to a lucky commenter. Thank you for coming by today, and I look forward to hearing your ideas on genre mash-ups!
Laura
LauraBreck.com
Scandalous L.A. Desires
Secret Vegas Lives
both available from Red Rose Publishing
Posted by Alexis Walker at 7:00 AM