First of all, I want to thank Alexis, Dawn, and Marie for letting me come visit their blog today. It’s always a pleasure to connect with readers, and I’m honored when people take time from their busy day to chat with me.
When did you know you wanted to be an author?
For me the writing bug bit early. I spent most of my childhood in my world of make believe, and not much has changed. I still prefer the stories in my head to those of the real world.
What is your favorite book from childhood?
My favorite book as a child was Judy Blume’s, Super Fudge. As a teenager I was a ferocious reader, so I can’t remember them all. But the one that stands out for me is the classic Gone With the Wind. I loved that Scarlett was a heroine that you could love and hate at the same time.

What inspires your writing? 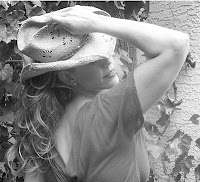 My ideas come to me at odd times and from random things. I could come up with an entire novel based on a lyric from a song or a movie clip. Most of my ideas come to me when I am outside jogging or just before I drift off to sleep. The last one is a hazard of being an author, since I stay up late to find out how the story ends and pay for it the next morning.

What character "spoke" to you first before writing this book?
I would definitely have to say the hero in this book. ConRad had such a strong presence in my head that I had to create a whole world based around him.

What genre of books do you love to read?
I write dark so I love to escape into fun and easy reads. Historicals are my go-to books, but I am getting drawn into more gritty series like the Hunger Games and Game of Thrones. 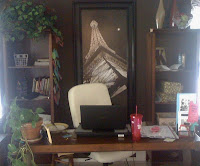 My writing space is in the middle of my dining room. I lost my office when my daughters started to balk about sharing a room. Now I depend on noise canceling headphones and an iron will to get my writing done. In the spirit of full disclosure, I posted a pic of my writing space.

Can you tell me about your latest release?
I would love to. Here is my back cover blurb.
Awakened in the middle of the night by a future version of herself, Kris Davenport is given a mission: go forward in time to save the world—and His life. Of course, her future self doesn't tell her who he is, just sends her into an abyss and straight into an alien invasion.
He turns out to be ConRad Smith, the callous, untrusting Commander of Earth’s army and the world’s last defense. There’s only one way to know for sure if this strange woman is an alien spy—slice her throat. Except, he didn’t anticipate the heat he would feel as he interrogates the hot-tempered, warm-blooded woman. For a man whose sole focus has been survival, she's more temptation than he can handle. But a world on the brink of destruction leaves no room for love…and time is running out.

Is there anything you would like to say to readers?
Just I hope readers will enjoy DARK FUTURE. To encourage people to try a new author I would like to give away a free copy of my ebook. For a chance to enter please leave a comment and tell me what type of stories you’d like to see more of. I am always willing to connect with readers. You can find me on twitter @kckleinbooks and on Facebook AuthorKCKlein and check out my website for any upcoming news http://kckleinbooks.com
Thanks so much!
Excerpt from Dark Future:
“Mmm, you taste human. Like salt or more like … warm sunshine?” He pinned me with his gaze. His eyes spoke a primal language. Desire warred with anger; need against punishment.
I looked away. Embarrassed. Violated. His body crushed mine, suffocating in its nearness. I couldn’t move. I couldn’t even breathe without crushing my breasts against him. I always considered myself strong and physically fit, but he subdued me with barely any effort. Heart racing, I panicked.
The feeling of no control would break me—complete powerlessness always did. I used whatever weapon was available; whatever maneuvers would give me a fighting chance. This was no different. I turned my head, opened my mouth against his neck, and … sunk my teeth in.
He cursed. Grabbed hold of my shirt, picked me up, and slammed me back against the wall.
A painful whoosh came from my lungs. My vision rocked—brain swished inside my skull.
“You bit me.” He sounded shocked.
My head hurt so bad I had to blink hard to keep my eyes in their sockets. “You licked me,” I shouted back.
He assessed me, aqua blue eyes hooded with thick, long eyelashes, for what seemed like an eternity. “I will ask you one more time. Who are you?”
“I’ve told you everything.” My voice sounded desperate, tired, even to me. “I went running and fell into the dark … I’m a doctor at a hospital. If you don’t believe me, just call them. I’ve worked there for years.”
He stood still, his body hard against mine, creating an insurmountable barrier. His face so close I could see his pupils enlarge, almost hiding the hard blue of his irises. The rage in him lived and breathed. One hand ran along my scalp in a mock caress, grabbed hold of my hair and pulled.
“Liar,” his voice barely a whisper, the knife was back … shaking at my very exposed, very vulnerable artery. “There hasn’t been a hospital anywhere on Earth since the year 2075.” And in one efficient movement, he drew the knife across my throat.