Thank you for having me as your guest today. Meander Scar is a story about a forty-something woman who is the process of getting her life together after the disappearance of her husband. She meets a younger man from her past who offers to help her settle her husband's estate while trying to convince that he truly loves her. When she learns what happened to her husband, she must decide how to handle it.

The title is a geographical term relating to the curve of a river. I always liked the sound of the words and the idea that even after healing from our hurts, or curves in life, there’s an after-effect, like a scar. Both Ann and Mark had past issues to deal with – don’t we all? – and realized that even though there were a lot of reasons they shouldn’t be together, they were better as a couple than as two lost souls trying to figure out what to do on their own.

I hope readers will enjoy the story, a lot of romance, some mystery and intrigue, a lot of soul-searching, and realize that love doesn't have to come in a pre-defined package; that not all fictional romances have to be tween twenty-somethings just starting out fresh and that telling the truth is a choice with consequences. 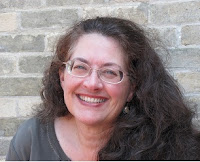 Lisa Lickel is a Wisconsin writer who lives with her husband in a hundred and sixty-year-old house built by a Great Lakes ship captain. Surrounded by books and dragons, she writes inspiring fiction. Her novels include mystery and romance, all with a twist of grace. She has penned dozens of feature newspaper stories, short stories, magazine articles and radio theater. She is the editor in chief of Creative Wisconsin Magazine and of OtherSheep, a Christian sci fi/fantasy magazine. She loves to encourage new authors. Find her at LisaLickel.com.
Title: Meander Scar, publisher: BlackLyon
c. 2010
Excerpt:
On the Friday Ann invited Mark for dinner, minutes inched. When she returned to her desk after delivering the stock inventory report of one of their holdings in Japan, her message light flashed. Absentmindedly, she pressed the button while clicking her computer screen back to life.
“Annie, it’s Mark. I just want you to know that I’ll be a little late tonight. I have to catch up on some research. It shouldn’t take that long, just a half-hour, forty-five minutes. I’ll see you later.”
Annie! Nobody called her that. She hated it. She had not even let her mother call her that and whenever Rachel tried, Ann had pulled her sister’s hair or punched her.
Annie.
She waited for the usual passion to stir up. Annie Oakley. Annie, Annie, pants on fire. Annie, Annie, all come free! Annie Banannie. Annie Bo-mannie.
Annie.
Mark’s voice sent a trill of pleasure up her neck, even if he called her…Annie.
Could she be an Annie? Could she become that kind of woman Annie represented? Annie was a baby name, a nickname for a person who was…what, carefree? Unconcerned. Young at heart? Annie—Any, anyone. Ann never wanted to be just anyone. She was Ann, mistress of her own life. Well, that’s what she had, the past seven years. Her own life. The woman who was Alone. A woman who took naps in the middle of the afternoon. The woman who waited, as if occupying one of those benches on the shores of the Wisconsin River at the retirement home.
She knew, then, that she didn’t need to be Ann anymore. Straight laced, alone, too secure, too demure, waiting for something to happen to her, waiting for someone to come and fix her problems for her. Gene’s absence was problem number one. After she dealt with putting his memory to rest, she could find someone to have fun with. She would show everyone that she was more than just plain old mopey Ann. She could be fun Annie, the woman who could have a good time. Maybe she would even get herself a boyfriend. Her palms turned clammy as she thought of touching a man again, feeling warm smooth skin under her palms. A man who had muscled forearms like Mark’s, whose strength she could lean against in a crowd and know he would keep her safe.
Gretchen Tomlin, Howie Gorman’s assistant, stopped at Ann’s desk. “Howie’s looking for…Ann, are you all right? Not getting one of your headaches, are you?”
“Oh, no, I’m fine. Here’s the report.” Ann handed her the folder and began to roll back to her desk. She stopped. “Gretchen, just a sec.” The other woman’s eyes widened in her surprise. “Do you think I look like…an Ann? Or could I be an Annie?”
Gretchen folded her arms, the report clutched in one hand, while she tilted her head and pretended to study Ann through twinkling eyes and a mock frown. Gretchen, who had known Ann since she married Gene, could not hold back her wide smile for long. “Ann, woman, you can be whatever you want. You don’t need anyone’s permission.”
To win a copy of Meander Scar, leave a comment for Lisa :-) Winner will be announced Wednesday in the side column.
Posted by Alexis Walker at 8:00 AM