Today we are interviewing Romantic Suspense author Nancy Kay. She is giving away DEADLY REFLECTION.

Alexis: Hi Nancy, thank you for visiting Happily Ever After Thoughts. Why did you choose to write Romantic Suspense over other types of romance?

Nancy: Hello, Alexis. Thanks for inviting me. Romantic Suspense ratchets up conflict, tension, and apprehension, while providing a healthy dose of anticipation - the anticipation being tied to a hero and heroine's quest for love. Why I write the genre may have something to do with the real life former Marine/ Pennsylvania State Trooper I've been married to for forty-seven years! Obviously, I'm drawn to men in uniform. Tapping my in-house resource provides unlimited situations and great technical advice. He's always shared, the good and the bad, giving me wonderful perspective. Romance in the face of danger intrigues me, excites me. Writing about the conflicts that arise as love struggles amidst danger in order to reach a happy ending is challenging, and in the end, enormously fulfilling.

Alexis: That makes a whole lot of sense! Your latest release is DEADLY ENCOUNTER. What is this novel about?

Nancy: DEADLY ENCOUNTER is the final book in a three book series, The Deadly Triad. The characters in DEADLY ENCOUNTER were introduced in the first book as secondary characters. In book two, they're also present. Obvious tension and conflict between them prompted readers to ask me when I was going to tell Lanie and T.J.'s story.

DEADLY ENCOUNTER is Lanie and T.J.'s story. Thrown together by a raging blizzard and a multi-car pile up, feisty Lanie and Trooper T.J. McGraw go head to head when Lanie insists she wasn't part of the accident, but the victim of attempted murder. Much to her chagrin, the trooper doubts her claim...until a couple of dead bodies are found beneath the snow at the rest stop Lanie sought shelter at during the storm. The discovery presents a dilemma in more ways than one for Trooper McGraw. The striking, green-eyed Lanie's life is in danger, and the growing attraction between them complicates both their lives, and the ongoing murder investigation.

Alexis: Ah, I can see how this suspense can really heighten the tension in the love story. Where did you get the idea for this novel? 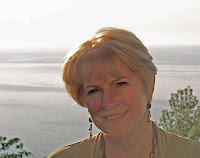 Nancy: When I first introduced T.J. McGraw and Lanie Delacor in book one, I suspected they'd end up together. I just didn't know how or when. I like to use environment to help create my stories and the harsh winters along the shores of Lake Erie where I live - and where the story is set - guided me in writing their story. With blinding blizzards, deadly cold, and treacherous ice as a backdrop, Lanie and T.J.'s story unfolds.

Alexis: What are your favorite character traits of Lanie and T.J.?

Nancy: Lanie is a hard working, intelligent, determined woman. She worked and studied to become a top notch personal trainer with a degree in exercise science. But when it comes to love, family tradition, and strong roots, Lanie's confidence falters. On the other hand, T.J. came from strong family roots. Family traditions and loyalty are ingrained in him. He's a credit to law enforcement, handsome, and has a devilish sense of humor. Makes you wonder how two such opposites will manage that happily ever after, doesn't it?

Alexis: Yes, it really does. What type of writer are you? Nighttime or morning? Pantser or Plotter? Silence or music?

Nancy: I'm a morning person, so writing early in the day is usually best. However, I've been known to have a spurt of creative energy after a short nap later in the day. Plotting or Panster, I guess I'm a combination. Maybe a Planster? I have a general idea where my story is heading, and strangely, usually know the ending before I start! My plotting is done by keeping track of what I've written and referring to the stack of notes I've scribbled down whenever an idea hits me. I do keep character descriptions and relationships on file. I prefer silence when writing. Though when driving alone, I often listen to XM Radio, and sometimes lyrics or a certain tune will spark my imagination with ideas for future endeavors or current works in progress.

Alexis: Speaking of works in progress, what can we expect next from you? Do you have any new releases coming?

Nancy: I'm excited about my next book. It's a work in progress, and I've had such fun researching. The story will be set in a small town on the shores of Lake Erie, typical for my brand - Great Lakes Romance. Here's a clue. I spent several hours researching at a small family owned chocolate shop. I tasted, experienced the work, and learned the skills it takes to create their unique product. The owner, who's in his late 80's, worked in the shop as a six year old boy. I loved the history...and the samples! For the same story, I've spent time and had numerous correspondences with a friend who is a psychiatrist, and another who is a psychologist. That's all I'm going to reveal for now...except the title I'm considering is Sweet Deception.

Alexis: I love the title idea! Just your research makes the story sound intriguing . . . and yummy :-) Thank you so much for sharing your stories with us. It's a pleasure having you visit.

Nancy: It's been my pleasure, Alexis. I've enjoyed meeting you and having a chance to talk about my stories.

Alexis: For a chance to win a copy of the first book in the series DEADLY REFLECTION, be sure to leave a comment for Nancy. If I have contact information, I will let you know when you win, otherwise, check the side column for your name on Wednesday under WINNERS.

For more information on Nancy and her books, go to http://nancykayauthor.com/books.html

Alexis: Check out this excerpt from DEADLY ENCOUNTER

Alexis: Remember, for a chance to win DEADLY REFLECTION, the first in this series, leave a comment for Nancy :-)
Posted by Alexis Walker at 7:00 AM