Cruise of a Lifetime: Day 3 Sorrento and Pompeii – Farm and City

For our next exploration we started early once again on a drive from the port at Salerno to Sorrento Italy. The scenery was spectacular through and between mountains via tall bridges or long tunnels and winding roads along the coast. What a beautiful area. We arrived at a terraced 4 acre farm in Sorrento that was set upon the mountain side. There they had cows for their milk and they grew olives (olive trees are everywhere in this area), lemons, grapes and more.  Our first treat was to watch Maria make mozzarella by hand with milk she pulled from the cows earlier that morning. It was a fascinating process! When she was finished, we sat down for a snack that was entirely made from what the farm produced and it included: Cheese, salami, olives, bread, wine, limoncello, and cake. Delicious! 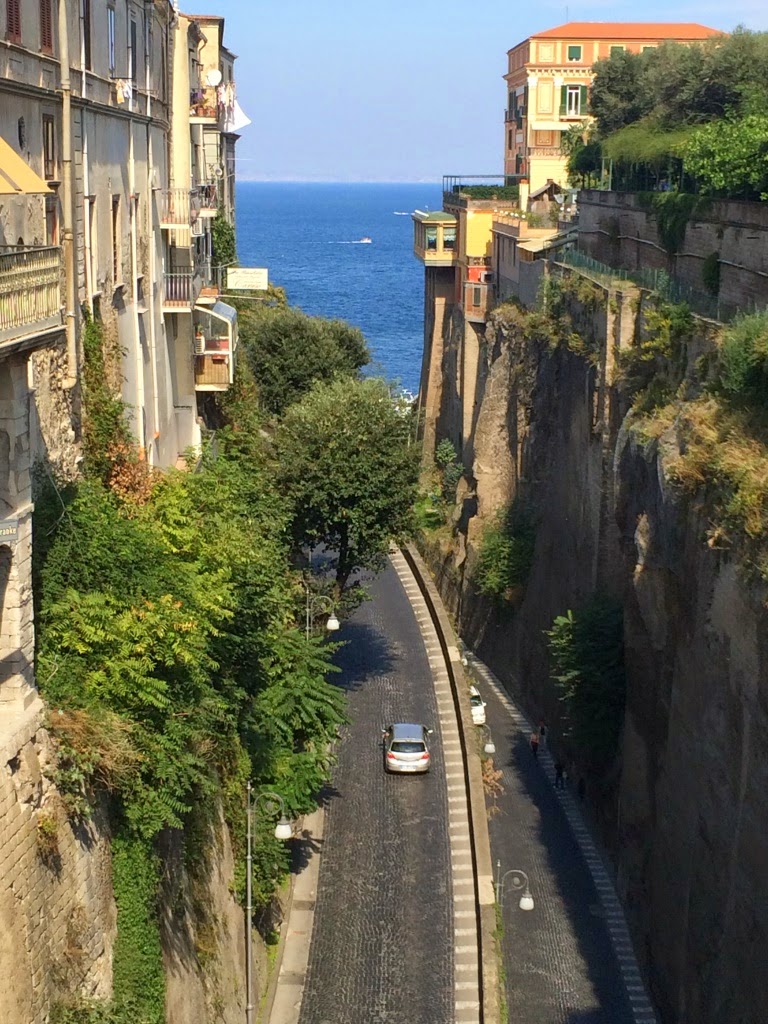 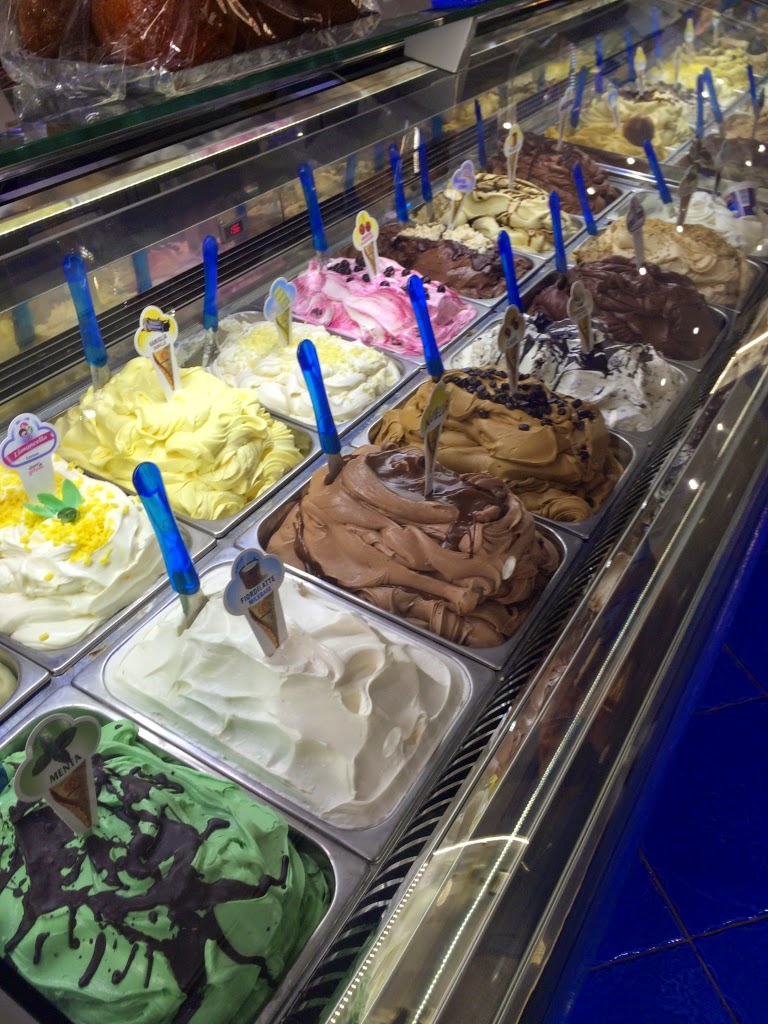 Then we headed down into the town of Sorrento to walk around and enjoy the sites. I did buy another hat. I just can’t help myself. I also discovered an excellent Gelato shop that made it hard to stick to just two flavors when they had over 50 flavors! With happy palates and full tummies, we then made are way through the countryside to the famed Pompeii. When Mt Vesuvius came into view on the highway, a shiver of anticipation passed through me.

I remember reading about this doomed city in 6th grade. The photos of the people frozen in time that my textbook displayed stayed with me all these years and now I was about to see it with my own eyes. 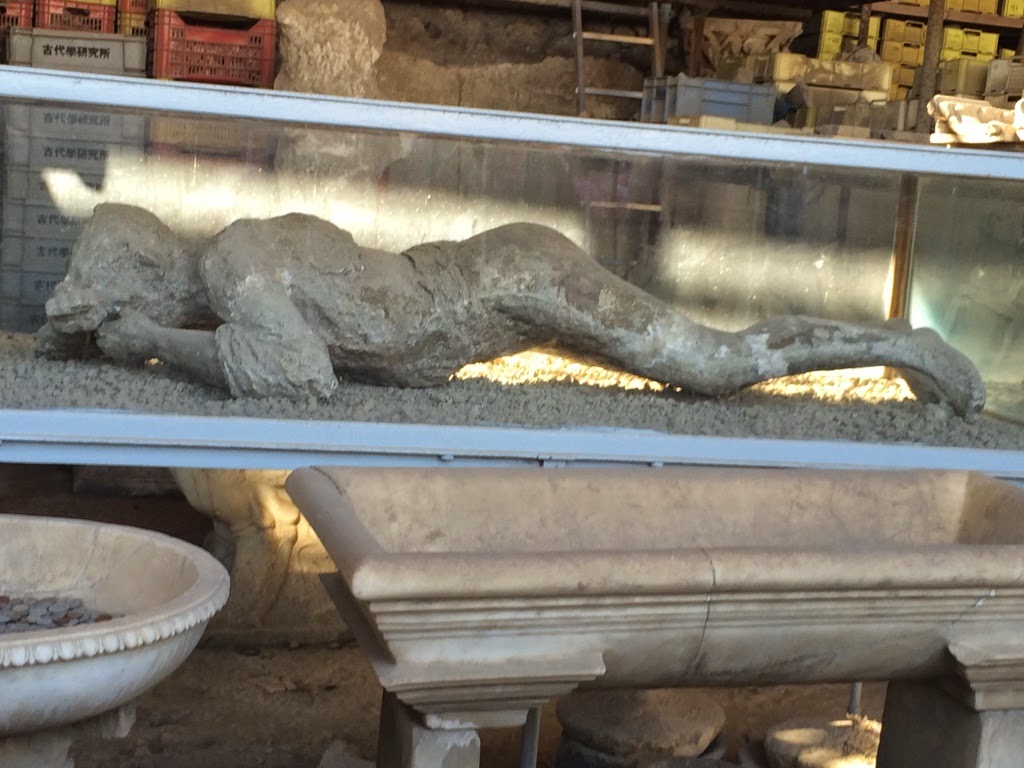 My first surprise was that excavations started over 100 years ago! My second surprise was the size of the city. It was huge and according to our guide had 20,000 citizens back in the 4th century which he said equaled over 2 million by today’s standards. 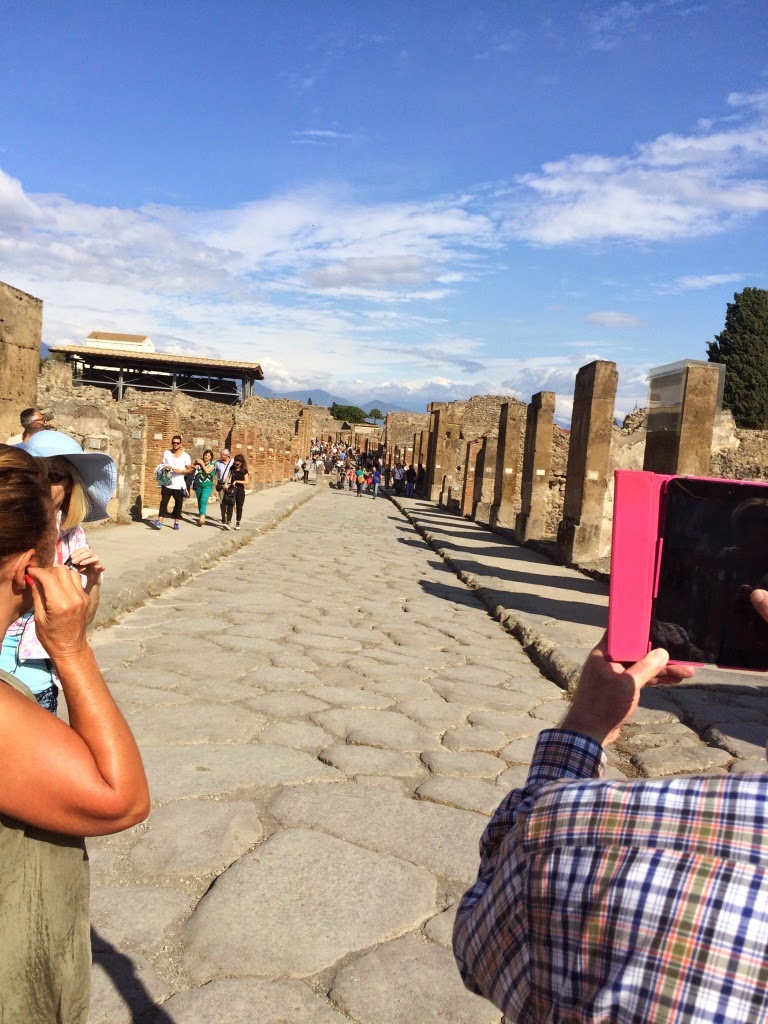 Pompeii was a trade center near the sea and it was very prosperous. Its construction was smart with sloping streets that drained the rain water and provided stepping stones so people could cross on foot and not get wet, piping that took sewage out of the city, and multiple luxury facilities. 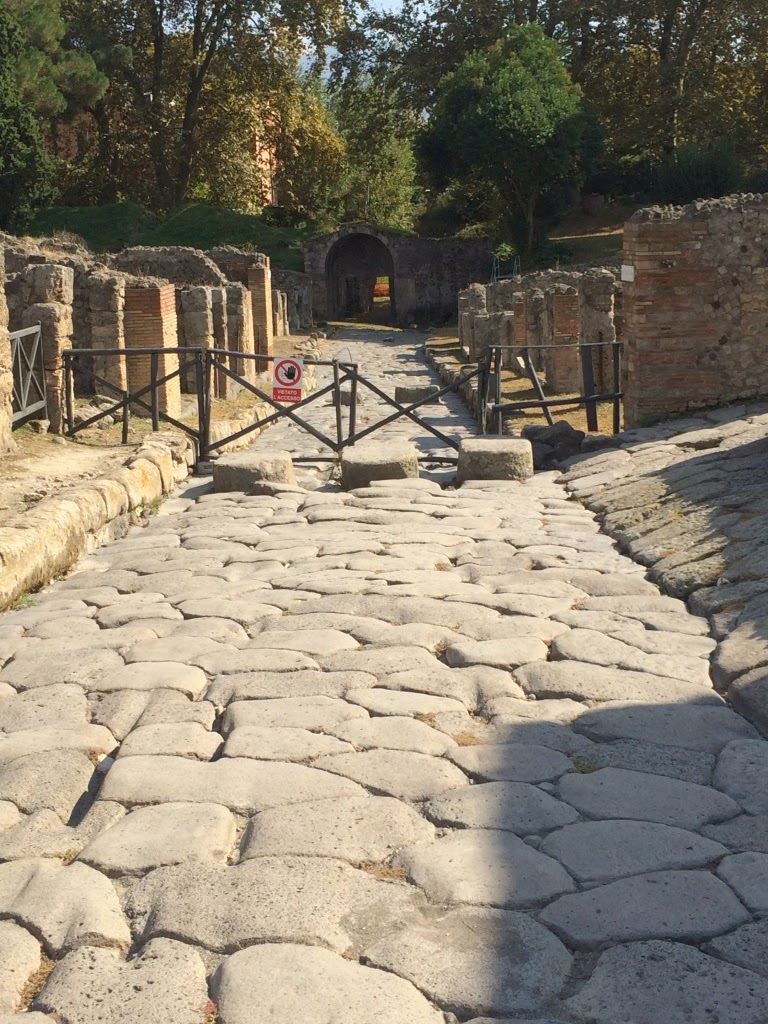 In addition to the athletic stadium where youth could train and compete, there was also the spa where the rich could relax with a massage or a hot bath. The city even boasted brothels. 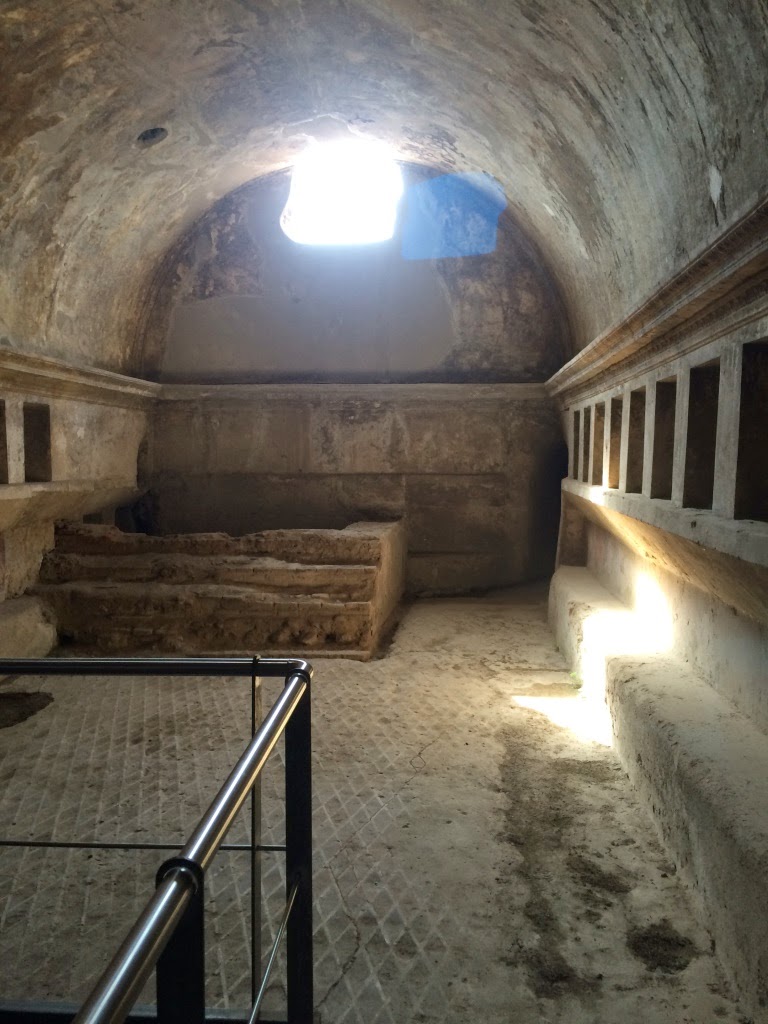 Since many of the women were captured from other countries and couldn’t speak the language, the graphic freezes on the walls inside let a patron choose which service he preferred and these “menus” can still be seen today. Plus, along the streets, up on the sides of buildings, were specific phallic emblems to point the way to the brothels for the many sailors that came into town. 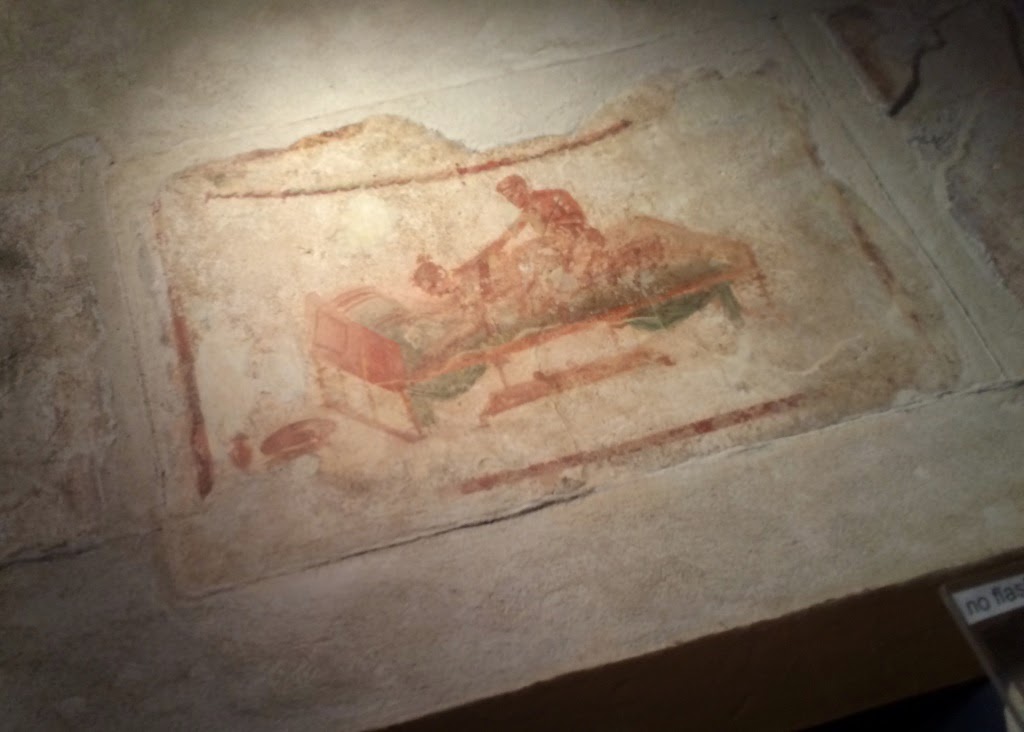 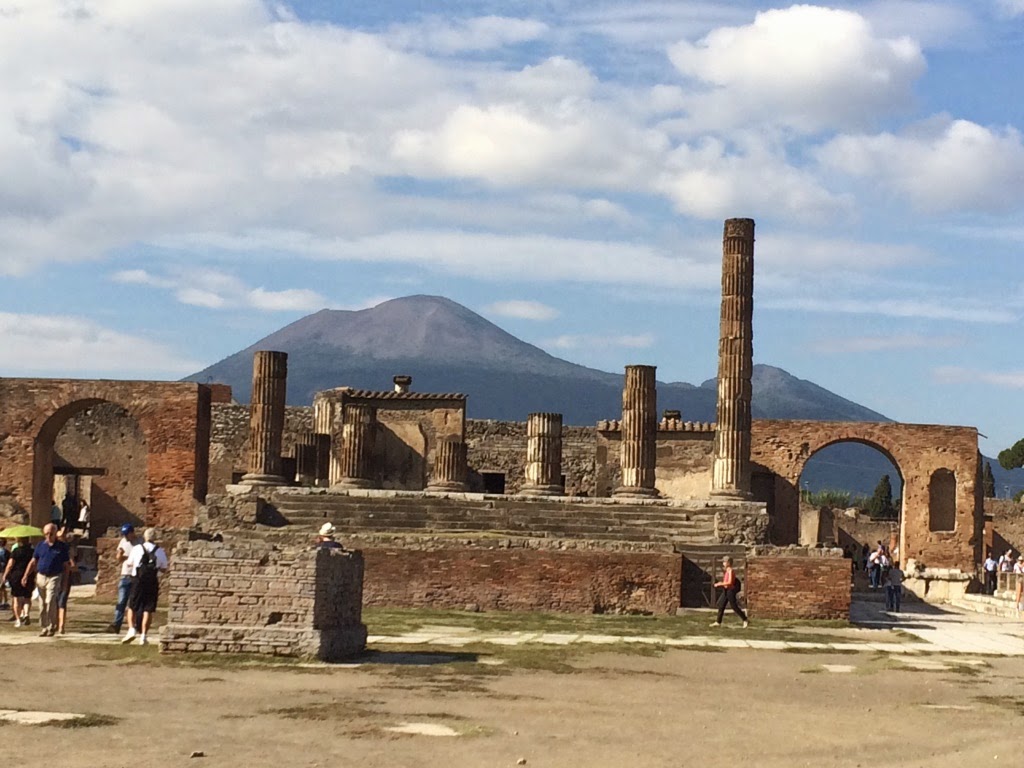 By time we boarded the bus, I was tired but thrilled to have seen such amazing places. I admit, I was looking forward to sleeping-in the next morning for our day at sea. With all the walking, steps, and sites, I would be happy to enjoy the sun and sea the ship offered.

In honor of Italy and its beauty, today I am giving away a hand decorated Venetian mask made there. While I did not get to visit Venice…this trip, I do think it a fitting giveaway. Leave a comment for a chance to win this beautiful mask :-) Winner will be pulled next Sunday, November 2 at midnight. Good luck!