Release of PLEASURES OF CHRISTMAS PAST by Lexi Post 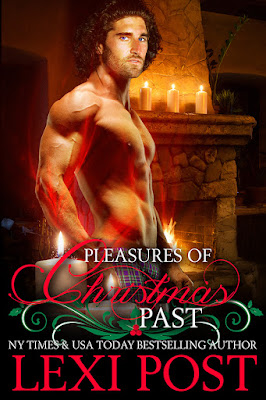 When present-day American social worker Jessica Thomas is assigned her first case as a spirit guide, she’s excited to serve as the Spirit of Christmas Past for her client and prove she knows her profession well. Unfortunately, her mentor, the very hot, very single, and very Scottish Duncan Montgomerie has little faith in her ability and plans to catch her when she falls. As far as she’s concerned, he’s going to be waiting a very long time.
Bachelor Duncan Montgomerie hails from late 18th century Scotland where he enjoyed life to its fullest, something he continues in death. Having been dead a while, he is well equipped to handle the afterlife where time doesn’t exist and phasing is the norm. What has him stymied is his connection to the uptight Jessica and the strange feelings he’s experiencing being around her, even though she refuses to listen to his advice. Duncan needs to figure out what it all means and fast because the rules change after death and the path Jessica is headed down could cost her her soul.

From what she could tell, there was no such thing as calories in the afterlife. Thankful she’d finally mastered the art of solidifying and phasing at will so she could enjoy her earthly pleasure, she took a bite of the sweet, cold dessert. As the nutty flavor washed over her tongue, she closed her eyes in sheer bliss. Now this was heaven. Opening her eyes to take another bite, she froze. “What are you doing here?”
Duncan floated on the arm at the other end of her couch, looking absolutely delicious in his jeans, t-shirt and socks. Socks?
“This is when your private lessons start.” The sexy grin he gave her had her swallowing hard as excitement skittered across her skin and into her groin.
Shit. The man was a walking tease. Make that a floating tease. She wanted Mr. Knows-It-All back. He was easier to deal with. Not sure what to say, she dipped her spoon in the carton and took another bite as her mind raced. What kind of lessons? From his look, her bedroom would be the proper place for them.
“What are you eating?” He leaned forward and squinted at the carton.
She swallowed and tried for a professional air. “Pistachio ice cream.”
“I dinna think I’ve ever tried that flavor.” His body phased to solid and he plucked the carton from her hand.
“Hey! The least you can do is ask.”
He shrugged as he dipped his finger into the green ice cream. “You’d just tell me I could have some, so why bother?” He lifted his finger and stuck the ice cream in his mouth. “Hmmm, this is good. No wonder it’s your favorite.” His grin could have talked a Sunday school teacher into stripping.
She stared, her body revving at the sight of him dipping his finger in again while her brain caught up to his words. “How do you know it’s my favorite?”
He winked. “I know everything about you.”
She flushed as her body heated. Crap, this man was a flirt if she’d ever seen one and his lilting accent didn’t help. She reached across the couch and grabbed the ice cream out of his hand. “If you don’t mind, I was enjoying that.”
He chuckled. “Oh, touchy.”
Why did she now feel like a bitch? She wasn’t like this usually. Mr. Distraction had her off balance and she didn’t like it.
If only Cameron could have given her a different mentor. Duncan Montgomerie would ruin her concentration and make fun of any mistake she might make. Her definition of “mentor” was not that. “I’m assuming you came here for a reason? I mean, besides the beautiful view.” She pointed toward the windows with her spoon.
He glanced that way before letting his gaze roam from the tops of her bare feet, over her legs, past her shorts to the stretchy fabric of her white tank-covered chest. She held her breath, waiting for his eyes to meet hers, but they stayed riveted on her breasts. Thankful she’d left her bra on so he couldn’t see how hard her nipples had turned at his perusal, she moved the ice cream to block his view and took another bite to cool down.
He smirked at her move. “As I said, it’s time for your private lessons.”

Email ThisBlogThis!Share to TwitterShare to FacebookShare to Pinterest
Labels: A Christmas Carol, Excerpt, Lexi Post, Pleasures of Christmas Past