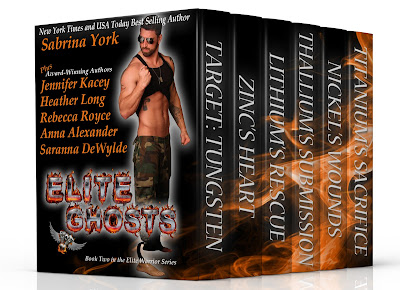 
For more than two years they’ve been ghosts. Nothing but names on empty tombstones. Men and women forced to fade into the background after being pulled from the rubble. Dead Marines saved from a fate worse than death, but ordered to stand down while their lives disappeared all around them.

Some knew it could happen if a mission exploded. Double crossed by more than just Red Wolf. But now is their time to be reborn from the flames of a Phoenix. No longer imprisoned in the shadows. A half-life between them and their future. To make things right coming back to life is their only option.
Loyalty is their salvation but damage is always more than skin deep.
A new hope. A new family. Elite Ghosts.

Target: Tungsten by Heather Long
Bradley “Tungsten” Peck. Marine. Lover. Friend. He’s the man who can get anything, find anyone, and accomplish every goal. At least he was, before he lost the only woman who mattered…he won’t stop until he gets her back or she puts a bullet in him.

Zinc's Heart by Rebecca Royce
Zinc has nothing to prove--and everything to lose.

Lithium’s Rescue by Sabrina York
He will save her…unless she saves him first.

Thallium's Submission by Anna Alexander
From now on the only orders he will follow are hers.

Nickel’s Wounds by Saranna DeWylde
Hell hath no fury like a Marine who’s lost her way. Beauty was once her currency, but for a woman who can’t feel anything but agony, she has nothing left. Except the vengeance that could destroy the one man whose love could teach her how to save herself.


Titanium’s Sacrifice by Jennifer Kacey
Titanium. Warbucks. Commander. Brother. He is all of those things. And none of them. Giving up everything to save the men and women under his command was easy until it comes to one…last…sacrifice.

Lithium’s Rescue by Sabrina York
He will save her…unless she saves him first.
Michelle Parsons is on the run. She has evidence of a plot that could destroy the country, but in order to stop her boss and his extremist cohorts from taking over the US Senate, she needs to get the information into the right hands. Trouble is, her contact, the only man she trusts, has been neutralized. She’s all alone. No one can help her.
No one, but the Elite Ghosts.
It’s a shame then, that when Benedict Butler—Codename: Lithium—shows up to bring her in from the cold, she doesn’t know if she can trust him or not. And when their relationship evolves into something more…he’s not sure he can trust himself either.
She does something to him, changes him. Heals him, somehow. And in the end, it’s difficult to say who rescued whom.

Read an Excerpt of Lithium’s Rescue! 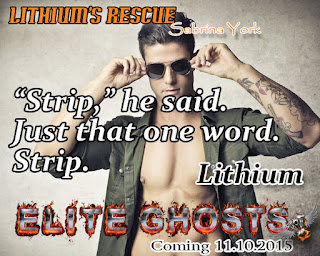 About Sabrina York
Her Royal Hotness, Sabrina York, is the New York Times and USA Today Bestselling author of hot, humorous stories for smart and sexy readers. Her titles range from sweet & sexy to scorching romance.  Visit her webpage at www.sabrinayork.com to check out her books, excerpts and contests. Get updates, alerts and giveaway announcements from Sabrina here: http://eepurl.com/bj8tKb.