Shana Gray with MORE THAN A FLING and a Gveaway! 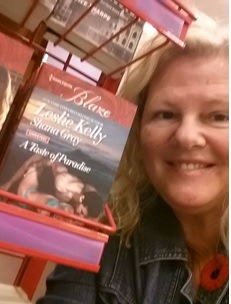 Aloha! I’m back visiting Lexi here today – I do love visiting her too :) – thanks for having me again Lexi.

December 1 is a really big day. Did I say REALLY BIG? It is! Why? Because it’s release day for my first ever, physical book in hand book. Normally I like to chat about all kinds of things in a blog post. But this time my mind is completely focused on The Book.

Can you tell I’m excited about it? I’ve already scoured the book stores around my house and found it in most of them.  It’s a crappy selfie, but hey, it’s me and my book! In the store!

And, if you get a chance, I’m having a Facebook party on December 2 in the Hawaiian Islands that you are all invited too. Click HERE to see all the great authors coming to the luau for mai tai’s. There’s lots of prizes too!

Firstly, The Book is A Taste of Paradise where I was honoured to be paired with Leslie Kelly in a Harlequin Blaze with our two smoking hot, Unrated! novellas. My story is More Than A Fling and it’s set in Hawaii. Our cover is awesome! 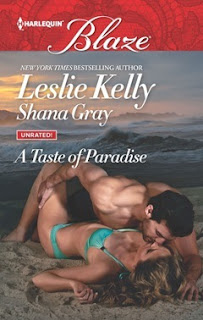 Don’t you think so?  I do
Here’s an excerpt from my story.
She felt her way through the darkened cabin to the lavatory -- perfect timing for the plane to hit a pocket of turbulence. Lana lost her footing, didn't see the door open and catapulted headlong into the person coming out. Not just any person, but a mountain of a man. She reached out to steady herself, her fingers closing around some very impressive, muscled shoulders. Arms snaked around her like steel bands, holding her tighter than she'd ever been held before. Lana gasped.
He smelled so damn good, too. She blinked and looked up -- way up. This man was huge, built, broad, tanned, blond...Viking blond with brown eyes that reminded her of chocolate syrup. Sticky, sweet, sinfully delightful. She swallowed when her heart tripped over itself, and she felt her panties growing moist. This is what she got for being celibate for so long.
“My apologies.”
Gawd help me! He’s got an accent.
Lana loved the South African cadence, and his was just as thick and sweet as the desire sweeping through her.
“No, it was my fault. I wasn’t paying attention.”
“That little bump in the road was somewhat of a surprise as well, ya.”
Keep talking.
“Uh, yes. Yes, it was.” The words dried up in her mouth when he pivoted her into the small area between the lavatory doors. He held her firmly and a little too closely, but Lana wasn’t going to argue. What were the odds in life a girl would be this close to such a fine specimen of a man? Nevah!  She would enjoy every second of this encounter. Oh, yes.
The plane lurched again, throwing her against him. Now breast to chest, hips to hips, thighs to thighs, Lana felt every nuance of him. She curled her arms around his neck and hung on as the jet bounced through the night sky. Mr. Viking didn’t pull away—she could have sworn she felt his arms tighten a bit more around her.
Sweet.
The jet’s path smoothed out, and Lana began to feel foolish in his arms. The right thing to do would be to step away. Step away from the man. Away from the gorgeous hunk of maleness that made her want to drag him into the lavatory behind them.
Lana opened her eyes. The sign on the lavatory door was right in front of her caught her attention. Vacant. All she had to do was open said door and push Mr. Viking inside, inviting them both into the Mile High Club. She swung her gaze to him and her heart flipped. He was watching her with an intensity that made her tremble. Was he thinking the same thing?
Reluctantly Lana stepped from the captivating heat of his embrace. The lingering aura of his power didn’t dwindle with the distance.
“Can I escort you to your seat?”
Oh, a gentleman, too.
“Well, actually…I need to…” Lana nodded to the lavatory door and nearly died when her cheeks heated.
He laughed and her knees wobbled. Good God, he was getting under her skin.
“Of course.” His voice was low and he bowed his head before murmuring, “If you care to join me after, I’ll order us a nightcap whilst you’re engaged.”
Whilst? He certainly was proper. Lana tipped her head back to gaze at him, knowing she couldn’t say no. “Yes, please. That would be delightful.”
Delightful? Holy shit, when had she become Ms. Formal? Lana fled into the lavatory before she could make a further ass of herself.

Leslie’s story is also set in a tropical location. Perfect for this time of year as winter descends on us. As well as Christmas! I can’t think about that right now. It’s release day soon!

*** FLASH GIVEAWAY*** Comment below and tell me your favourite place to vacation, have you been to Hawaii? AND sign up for my newsletter HERE for a chance to win a signed copy of A Taste of Paradise (North American winners only) and your pick of a back list of one of my ebooks (international winners). I’d be thrilled if you liked my Author Page too!

I’m a tropical girl all the way around. So for a tropical tease, this is when I visited Lexi last year in St. Croix. I loved it there and had such a fabulous time with her and her lovely husband. 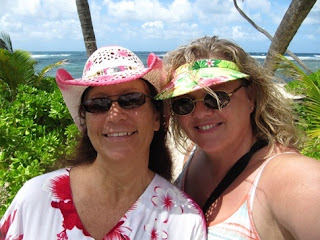 My links
Website  -has all my books and links listed
Amazon
Barnes & Noble
All Romance Ebooks
***COMING SOON***
March 29, 2016
From Loveswept Random House
After The Hurt
Shana Gray’s provocative novel features a resilient fighter going round for tantalizing round with the one that got away—a headstrong woman bent on seduction.

Pepper Chapman refuses to throw in the towel. Six months ago, she made the biggest mistake of her life. Blinded by grief after her mom’s death, Pepper abandoned the man she loves. Now she wants a second chance at everything she gave up: strong hands driving her to ecstasy . . . a deep voice whispering naughty promises in her ear . . . the future they’d planned since they were teenagers. So Pepper comes home looking for forgiveness, ready for a new beginning—if he’s willing to give her a shot.

Retired MMA star Tank Sherman may be used to low blows, but Pepper’s emotional sucker punch left him reeling. Trying to ignore the pain and forget the pleasure of her body beneath his, Tank is prepared to ring the final bell on their relationship. Then Pepper shows up out of the blue, radiating pure sex. But Tank won’t let himself get hurt again, and that means resisting the heat that still burns between them. Because if he takes Pepper back, he knows he’ll never be able to let her go again.

Email ThisBlogThis!Share to TwitterShare to FacebookShare to Pinterest
Labels: After the Hurt, FREE Book, Giveaway, Lexi Post, More than a Fling, Shana Gray