My DH & the Hummingbirds 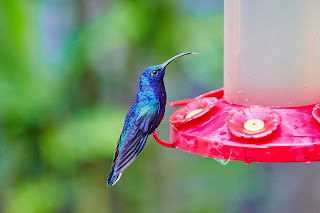 When my DH broached the subject of buying a motorcycle with me a while ago, I just couldn’t say no. You see, he missed riding. It had been a big part of his when he was younger and he gave it up for quite some time. In fact, when we first met (many, many years ago), he rode (which scared my mother half to death….he’s a bad boy, Marie….yes, those were her exact words). I admit, he was a bit scary back then, dressed out in his leathers with a full beard covering the bottom half of his face and sunglasses so dark, you couldn’t see his eyes (and yes, he’s looking a bit like that again, although there’s a lot more grey in that beard now).
My mother was wrong though. She was only seeing what was on the outside. My DH isn’t a bad boy….he may look rough and tough but in truth, he’s a marshmallow with a soft spot for animals and children (would I have stayed with him all these years if he wasn’t?).
Aside from the motorcycle sitting under my carport, he’s become fascinated with hummingbirds. There’s about ten of them living in my mesquite and eucalyptus trees and he’s hung a feeder so he can watch them flit from our tree to the neighbor’s feeder and back.
They watch him too. I’ve seen them sitting on the branches, following his every move as he polishes that motorcycle or works on cars. And they don’t chirp…they make more of a clicking noise (at least, that’s what I’ve noticed) and boy, do I hear that clicking (almost like they’re yelling at him) when the feeder is empty. He’s very quick to respond though, talking to them while he’s putting more food in the feeder. Eventually, I’m sure, he’ll be able to feed them out of his hand. They seem to like him, probably recognizing that heart of gold I recognized so long ago.
I guess it just goes to show that things aren’t always as they seem. You can’t tell what a person is by the way he or she looks, nor can you tell how good a book might be by its cover. That rough, tough, bearded biker might turn out to be the sweetest person you’ll ever meet and that book with its so-so cover just might hide one of the best stories you’ll ever read. And isn’t is wonderful to be surprised?